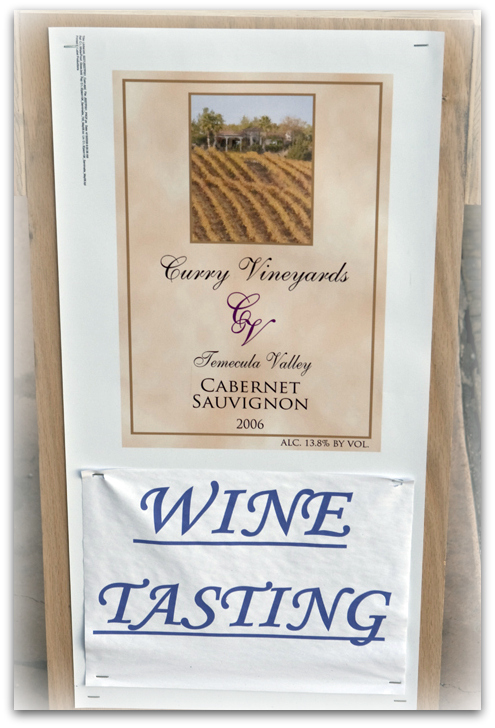 Charlie Curry isn’t a big believer in small talk. He chooses his words carefully. His passion shines through clearly, however. He loves making wine. His journey began in the Bay Area, when he took an apprenticeship out of high school and became a chef at the Winery Restaurants in Foster City and Palo Alto. In the ’70s bulk wine from Napa was so cheap they served it free with your meal. You could choose Cabernet, Chardonnay or Rosé. Charlie went on to sell meat and seafood from the Napa Valley to the Peninsula for the next 15 years. During that time, he became more and more interested in winemaking. He and his wife and family began visiting friends in Temecula in the early 90s and Charlie saw the potential for not only making good wine there, but also saw it as an ideal place to live. In 2000 he purchased 15 and a half acres on Glen Oaks Road and planted Cabernet Sauvignon, Cabernet Franc, Syrah and Zinfandel. His property sits at 1800′ overlooking the valley. The decomposed granite soil drains well and the vines get even sun with a Southern exposure.

Charlie says for the most part he’s self taught, but he did take some U.C. Extension classes and got a list of text books from U.C. Davis. He read a lot and hired a wine consultant and ran tests in his lab. He believes viticulture is the most important aspect of winemaking. “If you don’t have a good vineyard, you’re never going to have good wine.” Right now Charlie’s Zin is sourced from Old Vines in Rancho Cucamonga, but he will be releasing his estate Zin eventually. The Cab Sauv, Cab Franc and Syrah are all from hist estate grapes. I have tasted all of Charlie’s wines and just last evening tried his Cab Franc again. He’s making worthy wine. Charlie opened Curry Vineyards’ tasting room in the lobby of the Palomar Inn Hotel in Old Town Temecula at the beginning of the year. Prior to that he had been selling to a few restaurants and wine shops. Wife Michelle takes care of the kids and horses, but is there to lend a hand when she’s needed. Other than that, Charlie is a one man show. For right now he’ll be sticking with his four red varietals, but, he adds, if he does ever produce a white, it’s likely to be Viognier. Production is very limited, currently just about 500 cases a year.

Stop by his tasting room Thursday through Sunday, pull up a stool and have a visit while you taste his wines. He might even show you the video of the episode of The Invaders shot in Temecula in 1967. 28522 Old Town Front Street, Temecula – 951-821-1282