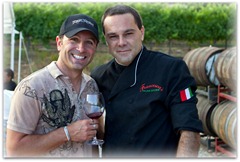 Cooking In The Vines – Raviolis at Robert Renzoni Vineyards s hard to beat. I found both in abundance the other evening at Robert Renzoni Vineyards in Temecula. Robert has launched a series of cooking classes, bringing guest chefs from area restaurants to prepare a gourmet meal, show you how to cook it and pair it with fine wine. I must confess, as I attended this event six days before my wedding, I have misplaced my notes from the evening, so I’ll do as best I can from memory.

Tables and chairs were set up inside the tasting room, and chef Giuseppe di Gristina from Raviolis Italian Bistro in Lake Elsinore had his grill positioned in the parking lot facing the patrons. We started with Robert’s excellent 2007 Barile (Oak Barrel aged) Chardonnay and bruschetta, the first I have ever tasted made without tomatoes. The next wine was the Renzoni 2007 La Rosa (Rose of Sangiovese), with an exquisite floral nose and love notes of strawberry and citrus. Chef Giuseppe prepared prawns with shell on and for the fortunate few (I was one) there were seconds.

I accompanied Alessandro di Sabatino from Francesca’s Italian Kitchen to the event. He was there to lend a hand when needed and also shared his insights on Italian cooking with those in attendance. We had to depart before Giuseppe began preparing his medallions of beef, but I look forward to attending another cooking night at Renzoni’s and hope to see you there.