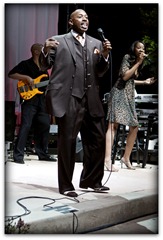 Rhythm On The Vine – Shriners Helping Kids Defy The Odds This past Saturday evening, music and the smells of barbeque filled the air at South Coast Winery. 1200 folks gathered for Rhythm on the Vine, a fund-raiser for the Shriners Hospitals for Children. Rhythm on the Vine was started last year and at least five concerts are on the agenda for this year. Last year’s efforts raised more than $515,000 for Shriners Hospital in Los Angeles. 100% of the proceeds go toward helping the Shriners provide health care at no charge to children up to age 18.

A silent auction featured some amazing pieces of sports memorabilia: signed baseball bats by Willie Mays, Alex Rodriguez and others, a signed Muhammad Ali robe, signed Wayne Gretzky and Michael Jordan jerseys, a signed Jerry Rice helmet and more. I wound up with the winning bid on an autographed Ken Norton boxing glove. While the stage was being set for Jeffrey Osborne, South Coast owner Jim Carter offered a couple of incredible packages from the Winery and Spa to raise more money during the live auction. There were some notables in the crowd including ventriloquist Ronn Lucas and Leave It To Beaver’s Jerry Mathers. Aside from helping raise money for the Shriners, the crowd was there to hear Jeffrey Osborne. Let me tell you, he delivered. After a sweltering day, the evening breezes were refreshing and the music was incredible. Next up for Rhythm on the Vine at South Coast Winery is Kenny G, September 12. Tickets will undoubtedly go quickly.