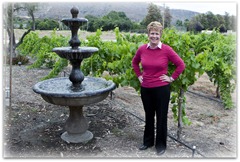 When people talk about Keyways Winery, you often hear mentioned that it’s the only woman owned winery in Southern California. That’s true, but there’s a lot more to Keyways than that. Keyways has been around since 1989 when Carl Key first opened the doors. Terri Pebley purchased the winery in 2004 and set out to leave her signature on it. The winery has undergone tremendous transformations inside and out. The tasting room is welcoming and very majestic, with a large fireplace and big easy chairs that invite you to make yourself comfortable.

One of the changes Terri made was to bring winemaker Mike Tingley aboard. Mike started his tenure at Keyways three years ago, but he’s no newcomer to making wine. Mike is self-taught. He started in the industry at Callaway Winery in 1980 and then moved to Cilurzo (now Bella Vista) in 1983. In 1986 he moved down the road to Maurice Car’rie and Van Roekel (now La Cereza) and spent the next 18 years there perfecting his craft. Mike has a clear love for making quality wine. He supervises the eight acres planted on the property: two each of Grenache, Tempranillo, Rousanne and Viognier and sets out to makes the finest possible wines he can. Mike showed me around the property and we went into the barrel room and looked around his lab. I learned the only piece of equipment a California winery is required by law to have is an ebulliometer, which measures the amount of alcohol in the wine. He gives Carl Key a lot of credit. Not only does the winery bear his name, but he was one of the pioneers of the Temecula Valley wine-making effort. Mike shares the same philosophy as many winemakers I have visited with. The wines you produce are only as good as the grapes you have to work with. You can make a great wine out of great fruit, but you can’t make a good wine out of poor fruit. Mike thinks some winemakers take too much credit and he considers himself more of a “wine custodian” than a  wine maker. He feels it’s his job to guide the grapes as they become wine.  Mike told me you just need to try things, that some thing that might not work “on paper” work just fine in the real world. He believes this micro-climate is ideal for Zinfandel and Syrah, and he’d like to see more of those varietals planted here. He’d love to be involved a carefully chosen selection of Zinfandel and Syrah clones and then making a blend from the best of the grapes.

Mimi Halan is Keyways Operations Manager. You can see the fire in her eyes. She just plain loves her job. She started her career at South Coast Winery and came on board just over a year ago. She and Terri bonded immediately. Her vision for Keyways is to offer something you won’t find anywhere else. To that end she has launched Piano Bar Fridays with different local pianists, paired with wine and dinner available if you so desire. Brand new is the Kezza menu on the weekends with quick and easy pizzas, a live pasta station and salads that pair well with wines. In August she’s planning a Beach Party Bingo complete with beach babes and bums. She wants their wine club to offer value to its members. There’s not a set selection, instead, members get to choose the wines they receive. She and Terri both find it hard to justify charging customers more than they would pay at their local market, so most of Keyways’ wines are available at the winery only. Her hope is that you will enjoy the experience enough that you’ll want to stay around for a while. As far as hiring winery employees, she has one priority – you’ve got to have heart.

Terri wasn’t in the day I visited, so I arranged to visit with her a few days later. Terri’s a gracious woman, a terrific host who makes you feel right at home at her winery. She’s clearly proud of her accomplishments, but you won’t find her resting on her laurels. When you visit Keyways, there’s a very good chance you’ll find her there.