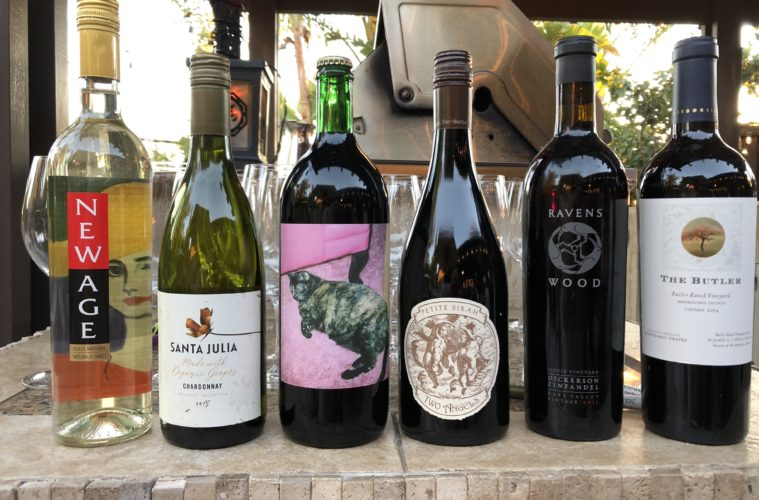 Another Round of Tasting Wine

We assembled at Scott and Wanda’s on an October evening with the temperature feeling like late summer. We had a good crowd, lots of wine and delicious food. Not only did everyone bring a dish, Wanda always outdoes herself in the kitchen. We began the evening with the non-vintage New Age White from Mendoza, Argentina. New Age is from the Torrontes grape, and it’s a wine designed to be served on the rocks. Scott called it a fantastic summer wine. Ken described it a s very refreshing and vibrant. Wanda said “I want more!” At $13, It scored better than four out of a possible five stars.

We moved onto the 2018 Santa Julia Chardonnay, also from Mendoza. Made with organic grapes, I picked up a bit of mint on the nose. I enjoyed its balance and green apple on the palate. Scott said it exceeded his expectations. Ken called it a nice summer wine. Jean called it light and drinkable. At just $11, it averaged three and a half stars.

I became a fan of Gia Coppola last year. We tasted her 2016 #thirsty. Gia’s wines all come in a 1 liter bottle with a bottle cap instead of a cork. #thirsty is a blend of Cabernet Franc, Syrah, Petite Sirah and Cabernet Sauvignon. Scott called it the “surprise of the night.” Tony liked the nose and said it was full-bodied with lots of potential. Al described it as amazing and a great value at $18. It was incredible paired with cheese. It received a solid four and a half stars.

The 2016 Two Angels Petite Sirah comes from Lake County. Ken called it definitely drinkable, but hard to define. Wanda described it as excellent and “meaty.” I liked its deep color and earthiness and found it paired well with chicken. Tony liked it but felt it could use another year of aging. It retails for $27 and it got almost four stars.

We moved on to Ravenswood 2015 Dickerson Zinfandel. Scott said it was top drawer and that “zinophiles will want this in their cellar.” Aged 19 months in French oak, I loved its expressive nose and found it fruit forward, but not jammy. Jean enjoyed the pepper, spice and fruit. Ken liked it, but felt it overpriced at $39. It too managed a solid four star score.

We ended the tasting with The Butler, a 2013 red blend from Mendocino County. Made with Syrah, Mourvedre, Grenache and Zinfandel. Scott said it was very good, but didn’t feel it was worth $50. Wanda called it elegant, smooth and delicious and said it was the best of show. Al said it was the wine of the night. Ken said the delightful nose followed through on the palate. It scored close to four and a quarter stars.

Tom Plant launched WINEormous in 2009 and is a member of the International Food Wine and Travel Writers Association. Based in Temecula, California, he offers intimate winery tours for no more than seven people. Tour details and pricing are available at www.temecula-tours.com. WINEormous is the recipient of the Luxury Travel Guide’s Wine Tour Operator of the Year award for Temecula 2016, 2017 and 2018 and the Lux Life Mag Best Customised Wine Tour Operator Temecula for 2019. Call now to book your Temecula Winery Tour at (951) 907-9701. Ask about special discounts.