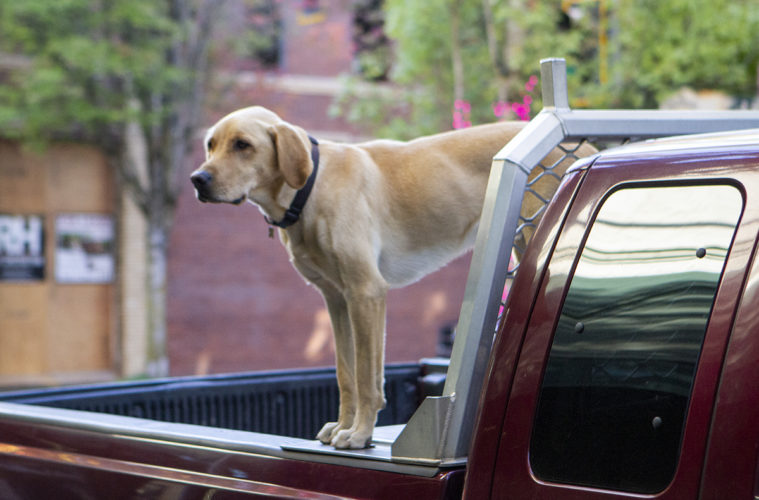 Wrapping Up A Visit To Oregon’s Amazing Willamette Valley On a visit to Oregon’s magnificent wine country last September, the weather couldn’t have been more spectacular. In fact, it felt more like I was home in California than in the Pacific Northwest. The week-long trip was divided between the Willamette and Tualatin Valleys. On the final day of our visit to the Willamette Valley, I checked out of the delightfully funky Hotel Oregon, and took a stroll through McMinnville’s quaint downtown. It’s not hard to spot a good breakfast joint. It’s packed with locals. The Community Plate is just such a place, The smell of freshly brewed coffee, frying bacon and eggs and homemade pastries filled my nostrils. We sat down and visited with Maria Stuart while enjoying a most satisfying breakfast. Maria does marketing and her husband Rob is the winemaker at R. Stuart & Company. Both have spent their entire adult loves in the wine business. Maria began selling wine in Chicago in the late 80s and fell in love with Oregon Pinot Noir. “My heart really belonged to Oregon Pinot Noir from a very early age.” She and Rob met after she won a trip to Oregon. She moved there in 1991 and they married the following year. The R. Stuart tasting room is in downtown McMinnville. Rob’s passion is sparkling wine and his Methode Champenoise Bubbly paired exceptionally well with the delicious heritage pork hash and eggs I enjoyed for breakfast. Courtney and Scott Cunningham own and operate Community Plate. They focus on fresh and local and go out of their way to source their food from local farmers and producers. They want their place to be more than just a restaurant. As the name implies, guests sit at communal tables and Scott and Courtney encourage them to get acquainted. Scott “touched every surface” of the restaurant before they opened the doors, painting, doing carpentry, designing, you name it. When a young woman went missing, Scott set up camp at the search site and spent three days cooking to feed the searchers. He just showed up and did it. Our last stop in the Willamette Valley portion of this incredible trip was at Lady Hill Winery. Jerry Owen and Barb Larimer welcomed us and shared the story of this unique winery. Jerry was previously part of the Owen Roe winery with a focus on Pinot Noir and Pinot Gris. With Lady Hill, he still makes those wines, but also loves crafting wine from east of the Cascade Mountains. Merlot, Cabernet Sauvignon and Cabernet Franc aren’t grapes that come to mind when you think of Oregon, but Jerry embraces the challenge they provide and the resultant wines. He uses whole berry fermentation and extended cold soaks as well as “different methods to coax the best out of the fruit.” The winery is named Lady Hill for a few reasons. One is to pay tribute to the feminine attributes of wine; beauty, grace, style and intelligence. Aside from that, in 150 years on the property, only one male child has been born to the family per century. On the back of each label is a Dante quote – “Beauty awakens the soul to act.” The tasting room doubles as a performance hall. The acoustics there are ideal for opera and live theater. There’s even an old church organ inside. They will host a poetry event this summer featuring Oregon’s Poet Laureate Kim Stafford. Owen wants his guests to enjoy a beautiful moment. The pastoral property includes a 1500 acre farm, forest, brush, wetlands and 20 acres of grape vineyards. His dad had a restaurant and his uncle had no children, so Jerry grew up growing corn, green beans and the like, so farming is second nature to him. He remembers his mom telling him “you bloom where you’re planted.” “We look east instead of south” meaning the methods they employ pay homage to France more than California. Lady Hill Winery produces less than 10,000 cases annually. I urge you to seek out these elegantly crafted wines. Before being handed off to the Washington County Visitors Association to explore the Tualatin Valley, we stopped for lunch at Ruddick/Wood in Newberg. A rustic spot, it’s airy and open and waiting for us was Jim Prosser, owner/winemaker of J. K. Carriere Wines. Prosser has a 40 acre vineyard and winery just outside of town on Parrett Mountain. “It doesn’t look like an Italian mansion or a French château. It looks like it’s from Oregon.” His sister Linda is the GM. While enjoying lunch, Jim shared several stories of his adventures in the winemaking industry. Prosser is a great storyteller with a quick wit and easy-going charm. The J. K. Carriere name is a nod to his two grandfathers. Prosser produces four to five thousand cases of Pinot Noir, Chardonnay and bubbles each year. He’s deathly allergic to stings from wasps, hornets and yellow jackets and features them on his label. He has spent more than 24 hours in ICUs around the world and receives the equivalent of two yellow jacket stings every six weeks to build up tolerance. Jim began making wine at Oregon’s Erath Winery in 1995 and has since worked at wineries in New Zealand, Australia and Burgundy. He says the axiom “it’s a man, it’s a woman, it’s a family farming a piece of dirt” actually holds true with them. “I make very classic expressive Pinot Noir built to age. Hopefully the wines taste pretty good in the end.” That they do. We tasted Glass, his white Pinot Noir, Lucidité Chardonnay (the name a nod to the French method of production and his Provacateur and Vespidae Pinot Noir. The wines are elegant and Jim’s humor shines through on the back of each label. Chef/owner Paul Losch stopped by our table to tell us a bit about Ruddick/Wood. He replied to a craigslist ad placed by Kyle Lattimer in 2013. Lattimer had his eyes on a 1920s era garage in Newberg and wanted to transform it into a restaurant. He was looking for someone to run the kitchen. Together they raised more than $25,000 on Kickstarter and today Ruddick/Wood is a thriving restaurant with a tavern in back. They are the very definition of farm to table. Losch does the butchering in-house and works with eight to nine local farms to acquire their produce. He spent time at the CIA at Hyde Park in New York, moved to Colorado and then back to New York where he helped open several restaurants. He says they offer “our take on comfort food.” The food was more than satisfying and an excellent accompaniment to J. K. Carriere wines. We said goodbye to our hosts Morgen and Emily and hello to Sylke and Jackie who were waiting to show us Oregon’s Tualatin Valley.