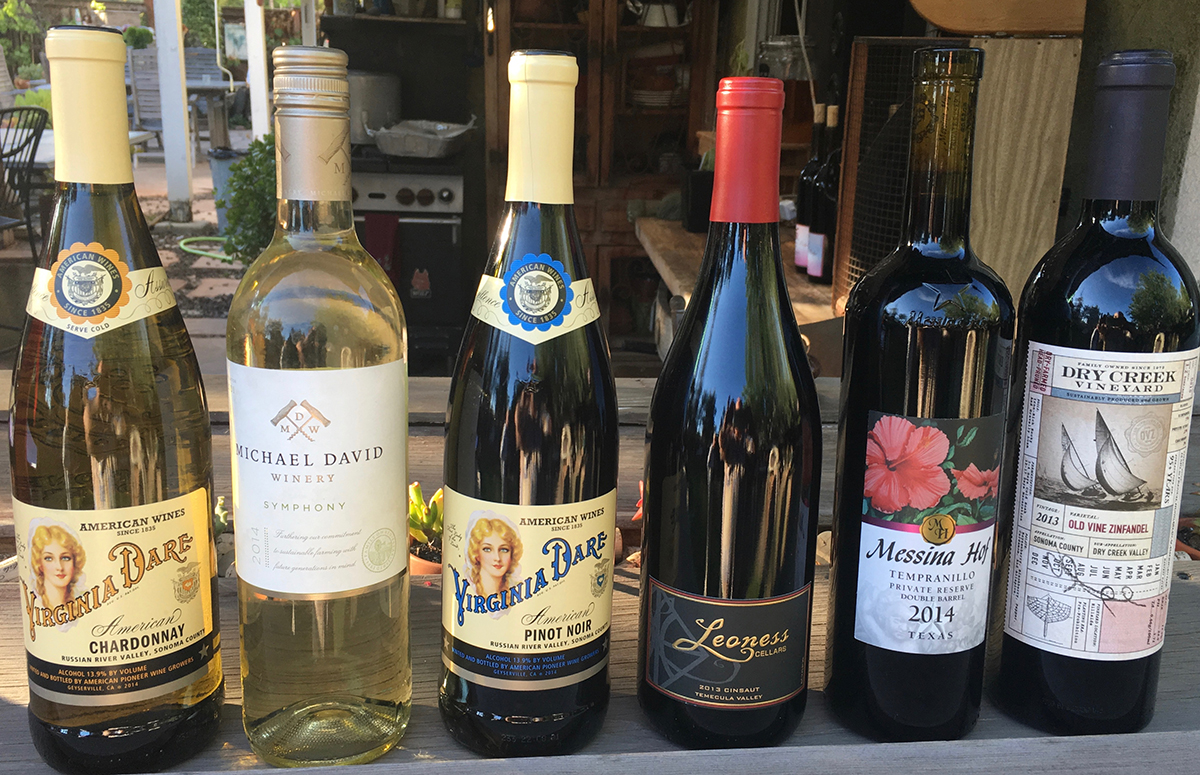 Getting The Gang Together Again After a few hits and misses, we were able to get the group back together again. When word got out we’d be tasting at Chef Marty’s place, spots filled up quickly! We had about 17 people join in for the wine and food extravaganza and here are some of our thoughts.

Our first wine came from Virginia Dare Winery, the latest wine venture from Francis Ford Coppola and family. We tasted the 2014 Russian River Chardonnay, aged 12 months in French oak. One taster didn’t detect any oak and said it tasted more like a stainless Chardonnay noting mild citrus and pear notes. Ken found it “very easy to drink.” Jim and Judi thought it was very clean. It received an average score of three out of five stars and a few felt it was overpriced at $25.

Next was the 2014 Symphony from Michael David Winery in Lodi. It was the first taste of the Symphony grape for many in the group and the overwhelming comment was that the wine was sweet. That’s not surprising when you consider the grape is a Muscat hybrid that was developed in Davis. Kim thought it would make a nice Sangria. Tony felt it was “more of a dessert wine.”  Jim and Judi called it the best Symphony they had ever had and liked the $15 price. It got an average score of two and a half stars.

We tasted another Virginia Dare wine, the 2014 Russian River Pinot Noir. Also 12 months in French oak, the alcohol is 13.9%. Ken called it smooth and balanced with cherry and violets on the nose. In contrast, Jim and Judi asked “where is the cherry?” Jan liked its balance. At $25, it averaged a three star score from our panel.

Next up was the 2013 Cinsaut from Leoness Cellars in Temecula. Winemaker Tim Kramer loves Cinsaut and also uses it as a blending grape and he makes a dessert wine with it. I liked the smokey nose and plum and black currants on the palate. Ken noted the smokiness, too and the spice notes. On a three star night, this $24 wine also got a three star score.

I’m always excited when we get to taste a Texas wine. We tasted the 2014 Messina Hof Tempranillo which also got a mixed reception from the group. Ken said it was “nice, nice, earthy and smooth” and gave it 4 stars.I liked the nose, but felt it would be better paired with food. There were a few comments about the wine’s astringency and high tannins. Esther thought it tasted great and gave it a perfect five-star score. It sells for $22 and scored slightly higher than three stars.

Our final wine was the 2013 Dry Creek Vineyard Old Vine Zinfandel. DCV is a favorite among our tasters and most of the group loved this wine. Jim and Judi called it “excellent! Tastes like the grape it’s made from.” Brian called it “smooth and dark like a sultry night that you want never to end.” Kim called it the best wine of the night. At $32 it got the best score of the night at nearly four stars.

We’ll be back at the tasting table again soon. Until then, cheers!