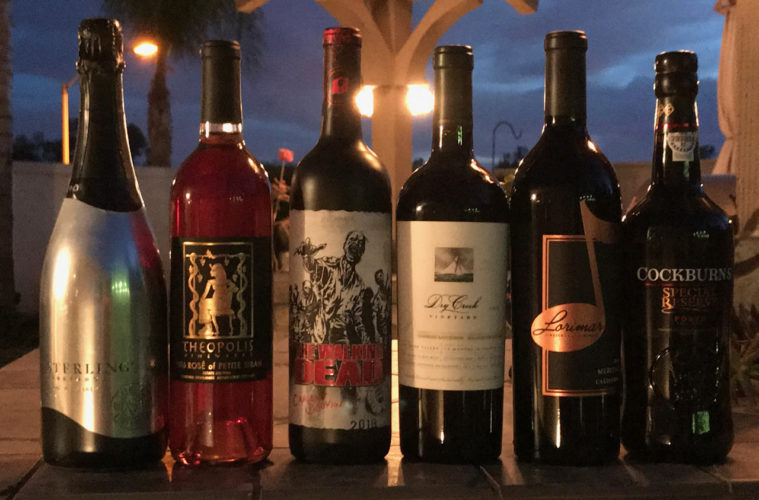 I still have a few tastings from 2017 to share with you, but I’d thought I’d share one we did this past Tuesday evening. About 14 of us gathered outside at Taryn and Ken’s place. It had been an unseasonably warm day, in the 80s, but the evening cool had begun to set in. We sat around three tables by the warmth of gas flames and tasted six wines.

We began with sparkling wine, Sterling Vineyards 2016 Blanc de Blanc from 100% Chardonnay. I don’t know if there was something in the air or not, but a lot of folks neglected to put their names on their tasting sheets. Scott found it clean and crisp and easy on the acidity, but felt there are others equally good for a few less dollars. Ken called it very tasty. Wanda thought it was soft and delightful, but a touch too sweet. Jan said it was very good and not too sweet. It comes in a gorgeous metallic bottle and sells for $35. Our panel gave it four out of a possible five stars.

I’d never tasted or for that matter ever seen a rosé of Petite Sirah before, but here we were with the 2016 Theopolis Rosé from that grape. From Mendocino County vineyards, it received mixed reactions. I really loved it. As expected it was dark for a rosé and it had a pronounced nose. I found tart strawberry on the palate and enjoyed its long finish. Chris commented on its lively acidity and long finish. A few people found it overly sweet. It just goes to show we all have different palates. It scored just over three stars and it sells for $25.

You should download the Living Wine Labels app for the next wine, 2016 The Walking Dead Cabernet Sauvignon. If you’ve seen the 19 Crimes wines and used its app to bring the labels to life, you’ll have an idea of what to expect with this label. Center the label on your phone and watch a zombie bust through the label. Get too close to the label and he’ll smash your screen. It’s great entertainment, but the group wasn’t overly impressed with the wine. One taster thought the marketing was great and the $18.99 price was appropriate. Wanda said it wasn’t pleasant. A few others loved the label, but not the wine. It scored about two and a half stars.

There was an anxious buzz when our tasters saw what was next, Dry Creek Vineyard’s 2015 Cabernet Sauvignon. Dry Creek is a consistent producer of quality wines and this was no exception. Aged 19 months in French oak, it’s 82% Cabernet, 9% Merlot, 5% Petit Verdot, 2% Cabernet Franc and 2% Malbec. Wanda enjoyed the “lovely nose” and thought the $26 price point was awesome. Mike called it a “great wine for the price.” I loved the nose and believe it will be a rock star wine in a few years. Chris found it well-balanced with a long, satisfying finish.It scored four and a half stars from the panel.

I ran into Mark Manfield recently, the owner of Lorimar Winery. He wanted us to taste the 2014 Meritage winemaker Marshall Stuart crafted. Wanda said “winner! Great nose, rich velvet. I love it!” Said Mike “Lorimar should be proud.” I loved its mouthfeel and was amazed by how it opened up in the glass. Chris called the finish long, fruity and complex. A few grumbled at the $54 price tag, but it scored better than four and a half stars.

We finished with the non-vintage Cockburn’s Special Reserve Porto. One taster loved the chocolate nose. I thought the deep ruby-red color was stunning and I loved the nose, but found it a bit thin. Wanda said it was her favorite for the $18 price. It scored a solid four stars.

Tom Plant launched WINEormous, a food, wine and travel blog in 2009 and is a member of the International Food Wine and Travel Writers Association. Based in Temecula, California, he offers intimate winery tours for no more than seven people. Tour details and pricing are available at www.temecula-tours.com. Call now to book your Temecula Winery Tour at (951) 907-9701! Ask about special discounts.