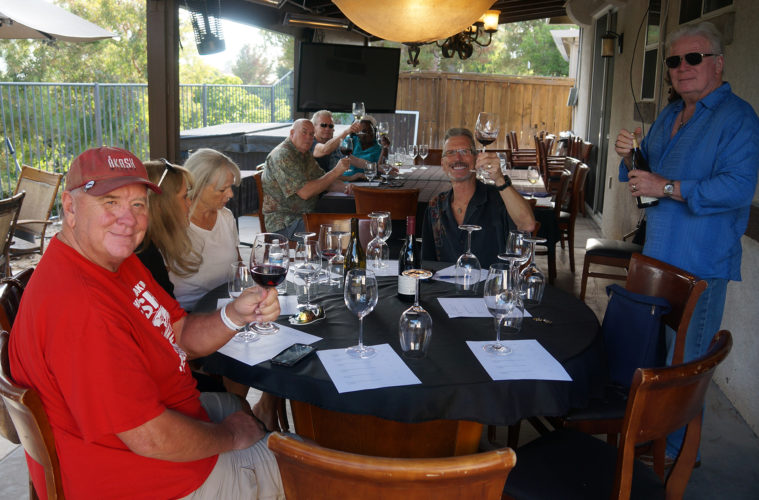 Tasting Wine While We Dine

We gather about every other week. I bring six bottles of wine or so. My friends bring food and a “bonus” bottle to share. At the end of July, we met at Tony’s home in Temecula. Here’s what we enjoyed. Summer and Rosé are a match made in heaven. We began with Minuty 2018 “M” Limited Edition. A Provençal rosé, this blend of Grenache, Cinsault and Syrah was a lovely way to begin the evening. Don called it “my kind of rosé.” I loved its pale copper color and stone fruit on the nose. Kim found it peachy, dry and crisp. At $23, our group awarded it just under four out of a possible five stars.

Dry Creek Vineyard gets a lot of love from this group, and we tasted their 2018 Sauvignon Blanc. Kim picked up cantaloupe on the nose and pineapple and lemon in the mouth. I got lots of white grapefruit and loved its balance and long finish. Don called it very fruit-forward and a perfect wine for seafood and chicken. It sells for $20 and got just over four stars.

We tasted an Australian Chardonnay, Vintage Longbottom’s 2018 “H”. Don commented on its beautiful straw color and thought it was light. Brian called the nose woody and said it was nice, “but doesn’t blow my socks off at $40.” Ann called it easy to drink. Kim said it was big, buttery, oaky and very Australian. It averaged three and a half stars. The evening’s first red was a Spanish offering, Castillo Monjardin’s 2016 Garnacha La Cantera. Brian called it a “lovely, brambly yet integrated wine. Fantastic value.” Don said it’s a wine he’d love to take to the beach and drink all day. Kim called it dry and dirty and thought $12 was a great price. Ann said simply “Oh I can drink this and get in trouble.” It scored right about four stars.

We traveled next door to Portugal for our next wine, Quinto do Vallado’s 2017 Douro Red. A blend of Portuguese grapes, I enjoyed its ruby color and earthy nose. Kim loved the color and found plums and dark fruits and a little spice. Don said it was easy drinking. It scored just under four stars and it’s $23.

We ended in France with the 2016 “Others” Red Wine from Department 66. Brian said it had an earthy appeal, “but quickly loses its charm like a French tart.” Don called it nicely balanced and fruit-forward. Kim said the nose “knocks your socks off. Yummy. Does not disappoint.” There were mixed reactions, but mostly positive. Expect to pay $25. It scored about four stars.