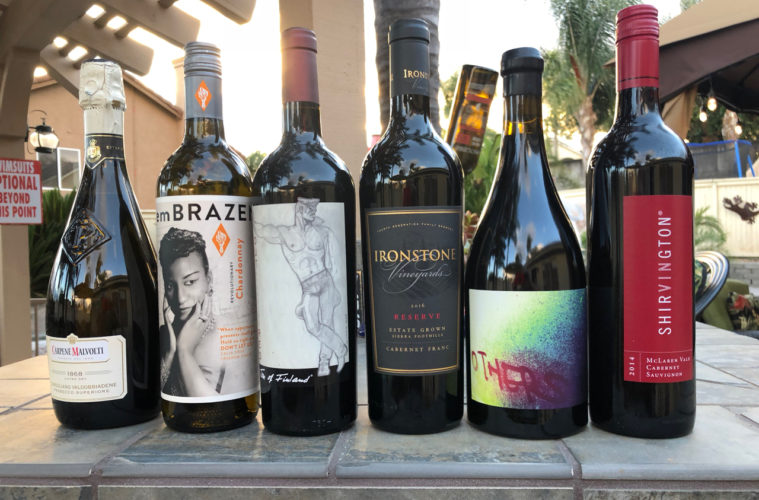 We all met at Ken and Taryn’s home in Temecula for a wine tasting and to share a little food and chit-chat. It was still warm at the tail end of an Inland Empire summer, so we gathered around some outdoor tables and enjoyed the evening breeze. We poured the Carpenè Malvota Prosecco di Coneglio in our glasses first. The Carpenè family is celebrating the brand’s 150th anniversary. Chris called it “bubbly and lively with a tart finish.” I loved its nose and long finish. Kat said she could drink it all day. Kim found lots of pear and called it “very pleasant at a great price.” At $19, it scored just above three and a half out of a possible five stars.

We tasted the 2016 emBRAZEN California Chardonnay next. Celebrating Celia Cruz, the Queen of Salsa, winemaker Olivia Teutschel fermented grapes from across California in stainless steel tanks. A third of the juice underwent malolactic fermentation. Oddly enough, two tasters said it had “just enough” oak. Al thought it was a wonderful value at $16.  Brian called it a great value and liked the “dry, desert-like sandiness of it.” David was impressed, saying the nose smelled like a reserve wine. I picked up yellow delicious apple on the nose. It also scored better than three and a half stars.

Our next wine should win an award for its creative label. Tom of Finland’s 2016 OUTstanding RED. Tom was born Touko Laakonsonen in Finland and was selected to be on Finland’s postage stamps in 2014. The wine is a blend of Petite Sirah, Zinfandel, Cabernet Sauvignon and Merlot from Lodi and the Sierra Foothills. A portion of the proceeds benefit the tomoffinladfoundation.org. Brian liked the leathery nose and dark fruit on the palate. Kim called it bold and flowery. Chris enjoyed its inky color and peppery nose, but felt the finish was weak. I found it a bit too sweet. David liked the deep black cherry nose, but said it had no finish and he expected more. Al called it jammy with a hint of pepper. At $25, it also came in at just over three and a half stars.

Ironstone’s 2016 Reserve Cabernet Franc was next. Made with Sierra Foothills fruit, it has a touch of Petite Sirah, Zinfandel and Cabernet Sauvignon and spends two years in French and American oak. I enjoyed the earthy nose and found it elegant. It should age well. Chris liked its long, satisfying finish. Kim on the other hand found it somewhat bitter. David said it had a beautiful nose and the finish. Ken said it wasn’t “tripping his trigger.” Tasters were very divided on this wine and gave it just under three and a half stars. It’s also priced at $25.

David Phinney has a legion of fans. Known for creating the wildly popular The Prisoner, he has come out with a series of wines under the Locations label and has now introduced Department 66. After traveling to Maury, France in 2008, he purchased a 40-acre old vine Grenache vineyard there and began constructing a winery the following year. He now owns more than 300 acres and has a home in Maury. We tasted his 2015 Others  red wine. Al called it the “wine of the night.” Brian called it “rather a luscious mouthful.” Kim said it was “a French wine that tastes like Napa.” An exceptional value at $25, It scored better than four and a half stars.

We ended with a 2014 Shirvington McLaren Vale Cabernet Sauvignon from Australia. Al called it a bit young and said it needs to lie down a while. David said it smelled amazing and would like to see what it tastes like in a few years. Chris enjoyed its deep garnet color and black currant, chocolate and clove nose and called it superb. I found it complex with bright acid and good balance. A few felt it was overpriced at $59. It averaged close to four and a half stars.