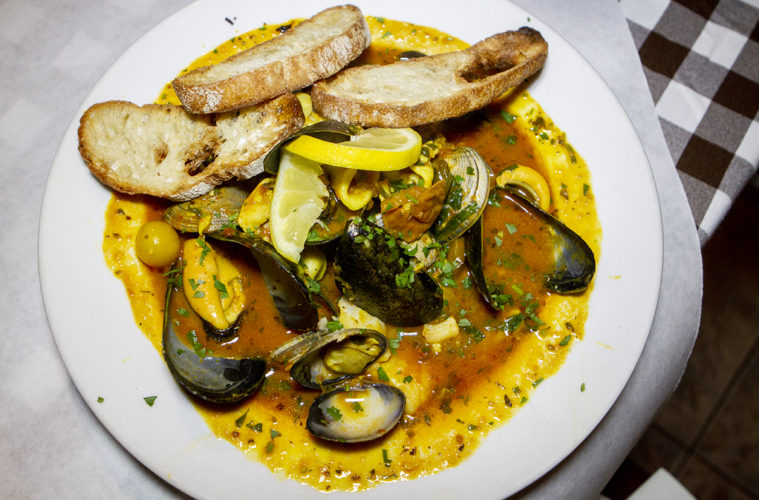 It’s not likely you’ll find many Italians with dreadlocks in Palermo, Sicily. You will, however, find one in Temecula, California. Chef Giampiero (Giampi) Giammanco starts his day each morning at 7:30 in the kitchen at Il Tramonto Ristorante with a shot of espresso and some reggae music. The reggae, he says, fires him up more than the coffee. We met Chef Giampi and his wife Lynn on a recent evening at their Old Town Temecula establishment. Baily greeted us and said “let me seat you at my favorite table.” We sat near the window and shortly thereafter the Giammancos joined us at the table. He’d been working in San Diego, first in Hillcrest, then in the Gaslamp, then Little Italy before making the move to Orange County. He turned down a few big jobs because management wanted him to cut his hair, which he keeps tucked inside his oversized cap. Lynn was concerned restaurant owners were investing money in aesthetics rather than in the kitchen. His dreadlocks play an important part in his ‘journey’, he says. It gives him the same feeling of freedom and happiness listening to reggae does. The Giammancos wound up in Temecula when a loyal customer of Palumbo Ristorante saw him in Orange County and told him the restaurant was going to be available. “We’d like to open a restaurant with you” he told chef. Giampiero and Lynn came to Temecula on a day off Monday and felt an immediate connection. They liked all the independent ‘mom and pop’ businesses they saw. With the big chains, they feel, you’re just a number. They wanted a place where people remember your name, what you like you eat and what your favorite wine is. Things like that mean the world to them. “I believe when a family goes out it’s a big treat” whether it’s once a week or once a year. He wants to make certain they feel like they’ve been pampered and are getting back what they’ve sacrificed. Chef Giampiero pays tribute to his mom and dad wherever possible. When he was about six, he remembers his parents worked six days a week. Sunday was “happy day” and he and his sister would get up at 7:00. Mom and dad had already been in the kitchen for three hours preparing the Sunday feast. “It wasn’t me that went to the food, it was the food that came to me – the smell of the food created from mom and dad.” He escorted us across the restaurant to show us pictures of Palermo, Sicily where he grew up, ten minutes from a fishing village. Temecula reminds him very much of his home town. “Food is a part of part of everything, part of the family, part of the culture. It’s a journey.” He always thinks about someone or something when he’s cooking. The  story of how they met is crucial to the story. Lynn’s youngest son Thaddeus is married to Victoria, who was our server. Giampiero was the chef in the restaurant where they both worked. Lynn saw him with his dreadlocks in blue jeans and a t-shirt on the restaurant patio and felt like a ‘high school girl.’ Long story short, he asked Lynn out for a drink. That was six years ago and they’ve been together ever since. They opened Il Tramonto on May 30, 2018, the anniversary of their first date

Arancine with Shrimp and Caponata

Il Tramonto is cozy and intimate. Chef said he wanted to cook for us, so we set our menus down and let him work his magic. The first dish he wowed us with was arancine stuffed with Italian cheeses and deep-fried. He topped that with colossal shrimp and a saffron and orange sauce dusted with fresh roasted pine nuts, shaved pecorino cheese  and a balsamic glaze. In the middle of the platter was Italian caponata chutney with jumbo wild caught scallops wrapped in prosciutto and pan seared. It tasted every bit as amazing as it looked. Along with that was bread crumb artichokes oven roasted with fresh crushed garlic, oregano and pecorino cheese placed on fresh-baked crostini drizzled with olive oil and lemon emollient sprinkled with shaved pecorino. We were mesmerized by the appetizers and then out came the entrees. The Cioppino alla Franco is a nod to his dad. His old family recipe is loaded with mussels, clams, shrimp, calamari and fish of the day in a savory, but delicate broth served with housemade crostini. It was a symphony. We also savored the Pappardelle Bolognese, a fresh pasta with rich homemade meat sauce. The colors were so vibrant, the plating was exquisite and the flavors simply popped. He wasn’t about to let us leave without dessert. Well, it would have been rude, right? He presented us the finest Tiramisu either one of us had tasted and a sensational Cannoli. Half our feast came home with us. Our evening at Il Tramonto was exceptional. We have two new friends in Giampi and Lynn. Our dinner was one of the best in recent memory. Chef has been working for nine months without a day off and very few breaks. When you visit with him, you don’t see fatigue, you see joy and passion. Next time you’re in Temecula Old Town, make sure you set aside some time for a meal to remember at Il Tramonto. They’re open for lunch and dinner Monday through Friday and brunch and dinner on the weekends at 41925 5th St. You can give them a call at 951 699-7925.