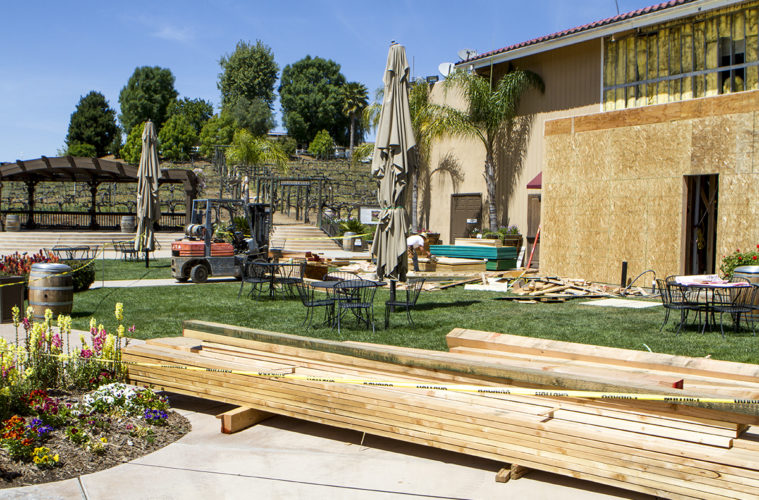 When the Wilson family opened the doors to Wilson Creek Winery in 2000, little did they dream it would become one of Temecula’s most popular destination wineries. “It was supposed to be a small little turnkey operation” Mick Wilson told me. “We thought we’d have maybe a couple hundred people a week.” Today it’s not unusual to see 1200 people visit the tasting room on any given Saturday, making it one of the busiest in the state. Its Creekside Grille serves lunch Monday through Saturday as well as a popular Sunday brunch. Across the street is the Wilson Creek Manor B and B.

I joined Mick for lunch at the Grille. He was with a construction crew when I arrived, checking on the progress of phase one of three major renovations underway at Wilson Creek. Mick is COO of the family business. He described his role to me as “knocking things out in front of” his team, so that people like head winemaker Gus Vizgarda and enology and viticulture manager Greg Pennyroyal can do their jobs unimpeded. “They’re the experts.” While I savored scallops topped with mango salsa, Mick described the work underway at the winery. Phase one, scheduled to be completed by July, is the addition of a reserve tasting room above the existing tasting room. For an additional fee, guests will be able to enjoy a sit down tasting of five wines paired with food with one of the owners or a sommelier. It’s for those who “don’t want to belly up to a bar, but want a sit down hosted experience.” The spacious room features high ceilings and a wrap-around patio as well as a bar for those who don’t mind standing. Six months after the completion of the reserve room, phase two should be complete. The downstairs tasting room will have walls “blown out” and the room will be expanded and feature a horseshoe bar and much more space. The third and final phase, due a year after phase two is complete, will be to take the current members tasting room, expand it and add a full kitchen which will also service the patio.Members can enjoy a sit-down or stand-up tasting with the option of ordering appetizers or pizza. Mick is recognized by the Court of Master Sommeliers as a level two sommelier, not an easy certification to obtain. Not only that, he’s a pastor, working on his doctorate of ministry and he teaches at a local bible college. Another project he’s working on is Christ and Cabernet, a nod to his favorite bible chapter, John 15, in which Jesus says “I am the vine and you are the branches.” Back in the days when the bible was written, people understood vineyards and agriculture. Today, most people who are urban dwellers have no clue. He’s taken his knowledge of wine and divinity and combined them in hopes of helping people understand that chapter. He has an old Syrah vine he calls Vinny that he takes to churches. He brings him out in a barrel with canes on one side and foliage on the other to demonstrate the importance of pruning vines. “You don’t just go in with a weed whacker” he explained. The pruning needs to be strategic to bear the best fruit. People have told him the demonstration brings the chapter to life for them.

You hear the phrase family run business tossed around a lot. At Wilson Creek, it’s the textbook definition. Most anytime you visit you’ll find at least one Wilson on the property. Rosie and Gerry, the family’s matriarch and patriarch, have a late lunch at Creekside Grille nearly every afternoon. “When we first started, we were literally all in.” You’d find Mick and Bill pouring concrete, Gerry doing drywall and Bill on the roof laying tiles. Most of the family remains involved in the business and several members are on the board. Recently the entire family went to a UCLA baseball game to cheer on a nephew. They take a family retreat each year. You can trace the hospitality that emanates from the family and staff at Wilson Creek back to the family’s “iconic” South Pasadena home where they lived for more than 25 years.  Mick, brother Bill and sister Libby were all within three years of each other in school.”When we threw a party, everyone was there.”  People would drive by just to see what was going on. Mick attributes it to the Midwest “hospitality gene” Gerry and Rosie have. Their home was open to all on Thanksgiving, Christmas, Easter and any other time. Folks who didn’t have a family would just come. They took in an exchange student who was being beaten at home. He wound up staying for three years and his brother moved in for two years.

“We were the fun place. I think what we’re doing here is the same thing. It just kind of rolled over.” They were so used to welcoming people into their Pasadena home it was a natural progression. “The Wilson house is now in Temecula and people who know us say ‘you’re doing the same thing here you were doing there.'” Every family has baggage and drama, but the Wilson family works through it. Calling themselves family run is “not something we do for the sake of a brand, it’s who we are.”

As COO, Mick oversees operations – facilities, vineyard and winemaking as well as capital expenditures and projects. Bill is CEO, and next to Rosie and Gerry, probably the most visible family member. His wife Jennifer is in charge of merchandising. Libby is the former HR director and now devotes her time to being a mom. Mick’s wife Deanna stepped down from her role as head of distribution when she became pregnant and now works for the man she hired, doing local distribution for chain stores. Adopted younger brother Christopher works at the winery and is doing a “great job.” Gerry and Rosie are the “heart of the winery.” They don’t try to engage, it’s who they are.  Mick admires their deep integrity and makes a point of spending a couple of hours with them each Thursday, when they all share a bottle of red wine. Mick and Deanna join Rosie and Gerry for Wilson Creek’s wine cruises. The two of them host onboard seminars, while his parents share the family story. So far they have cruised the Rhône, the Douro, the Danube and Rhine and their goal is to elevate the experience for their guests. At the winery they feature a Wine Academy with Mick, Gus and Greg as faculty teaching wine regions, the use of oak, wine and food pairing, wine and cheese pairing and they offer a seminar on the destination wine region prior to each cruise, “hopefully making wine fun and doing them in a very informative way. People just eat it up!”  The hope is that attendees leave informed, not just impressed.

Rosie and Gerry’s DNA seems to pour over those who work at the winery, and those who are drawn to it just stick while the rest “de-select themselves.” He says when you have passion for the people and the experience, the bottom line follows. When they purchased the property in 1996, Mick was more of a beer drinker and most of the wine he did drink was out of a box. “We knew enough to know what we didn’t know” and they hired the right people. Everyone gets along, the cousins, the dogs… well everyone except for Molly Merlot, the Alpha pig. Molly is being challenged, though, by the most recent addition to the family, Chablis, doing her best to assert herself as Alpha dog.

The Wilsons have had their share of failures along the way. “We’re a suburban family that went all in and did this.” They’re emphatic in saying they’re not different or unique. If they can do it, so can anyone else. There’s a realness and approachability to the Wilson family. I urge you to stop by and meet them. I’m sure glad I did.

Tom Plant launched WINEormous in 2009 and is a member of the International Food Wine and Travel Writers Association. Based in Temecula, California, he offers intimate winery tours for no more than seven people. Tour details and pricing are available at www.temecula-tours.com. Call now to book your Temecula Winery Tour at (951) 907-9701. Ask about special discounts He is the 2017 recipient of Luxury Travel Guide’s Wine Tour Operator of the Year for Temecula, CA award.