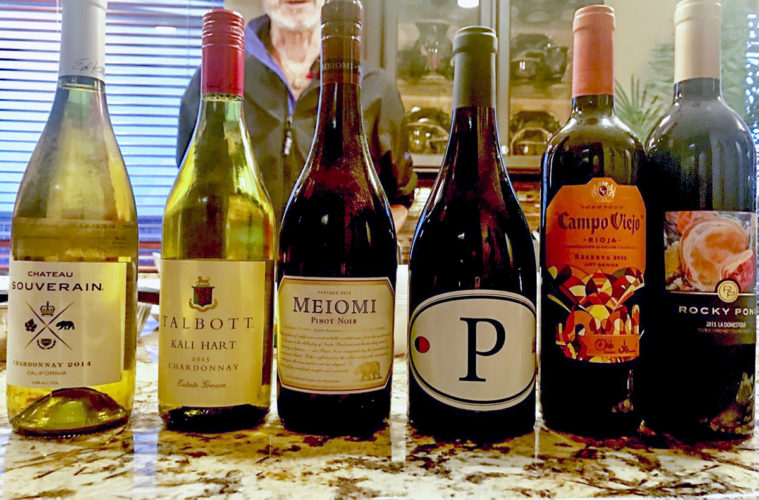 2017 has been a banner year for receiving wine samples. My dining room table is a testimony to that. Our group assembled at Tony P’s place to taste six wines, share some food and smoke some good cigars.

We kicked the evening off with Chateau Souverain’s 2014 California Chardonnay. Jake said it was over-oaked and tasted like bulk wine. Ken got lots of pineapple on the nose with notes of lychee and roasted pear. Kat called it refreshing. At $13 it scored around three out of a possible five stars.

Our second wine was the 2015 Talbott Kali Hart Chardonnay from Monterey, Brian got sherbet lemons on the nose and said “This I would cheerfully drink!” Kim called it a good everyday wine. I enjoyed the balance and finish. Jake remarked on the “beautiful use of oak.” A few said it tasted “strange” and at $16 it scored about three and a half stars.

Locations is a project spearheaded by renowned winemaker Dave Phinney, each bearing a letter of the alphabet designating the wine’s location. P is from Portugal, a blend of Touriga Nacional, Trincadeira and Touriga Franca. Jim liked the earthy, tobacco nose and its mouth feel. Jake enjoyed the dark fruits and long finish. Ken called it smokey. It sells for around $20 and it scored just under four stars.

Number four was the 2015 Meiomi Pinot Noir from California’s Central Coast. Jan found it a little heavy on the fruit, but at $14 a good value wine. Judi thought it was too sweet and called it “chocolate candy.” Jim said it was “not bad, but doesn’t really taste like Pinot.” Kim called it a “really nice Pinot for a very small price.” It also scored just under four stars.

We moved back across the Atlantic to Rioja, Spain and tasted the 2011 Campo Viejo Reserva, a blend of Tempranillo, Graciano and Mazuelo . This wine spends 18 months in American and French oak and another 18 months in bottle and sells for just $13. I was astonished by my visit two years ago to this gorgeous winery. The fact that they are able to produce so much wine at such a high-caliber is impressive indeed. Jim said it was light and very pleasant. Kim said “first rain on the road nose” and like the balanced tannins. I don’t think there’s a better wine for the price. It scored above than four stars.

We finished up with the 2015 La Domestique from Rocky Pond winery in Washington state. A blend of 72% Merlot, 14% Cabernet Sauvignon and 14% Malbec, I thought it was excellent, boasting an old-world nose. Jake said it was a classic cool climate Bordeaux blend. Ken felt it was a bit young and needed more time in bottle. Jan loved the nose. Brian enjoyed the “luscious” dark fruit. Brian called it “rich, dark and sexy” and said “It definitely has lead in its pencil.” At $39, it scored just over four stars.