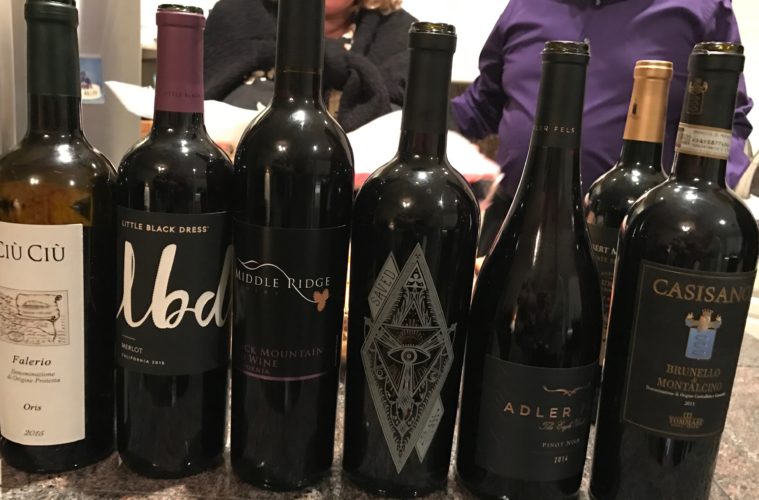 Our Last Wine Tasting of the Year

We’ve raised glasses at several different homes. Members of the group have come and gone. One thing remains constant. We love wine. We also love the companionship, and sharing our opinions about what we like and what just doesn’t do it for us. There’s always something tasty to pair with what’s in our glasses. We returned to Ken and Taryn’s where a huge group gathered last time. This time around there were only about 10 of us, so there were bigger pours and more intimate conversation.We began with an Italian wine, the 2013 Ciú Ciú Oris, a blend of Trebbiano, Passerina and Pecorino grapes. Kim called it fruity, but dry, light and fresh. Jake liked the acidity. Ken enjoyed the nose and found it very refreshing and called it a no-brainer at $6. It got an average score of three out of a possible five stars.

Next we tasted the 2015 lbd (Little Black Dress) California Merlot. The cherry shined through for me. Chris remarked on the lively acidity and said it needed more time in bottle. Ken liked the dark fruit nose. Jake called it straight forward. At $10 the panel thought is was a good value and awarded it just over three stars.

Next was the non-vintage Middle Ridge Black Mountain, a 50/50 blend of Lodi Cabernet Sauvignon and Amador County Malbec. Brian called it luscious and silky. Kim called it “smokey.” Chris liked the mocha, ripe plum and blackberry notes and found it well-balanced. Jake enjoyed the long finish. This $40 wine scored just over four stars.

The 2013 SAVED Red Blend features nine grapes from five California regions. Merlot, Malbec, Syrah and Zinfandel are the primary components. Jake said it needed time to breathe, but enjoyed the black cherry and raspberry as well as its “big structure.” Kim thought there was “too much going on.” I loved the nose and agreed it needed time to open up. It garnered just under four stars and sells for $20.

Our fifth wine was Adler Fels 2014 Pinot Noir from vineyards in the Santa Rita Hills and Russian River. It’s an elegant wine, one which Ken said “the nose absolutely delivers on its promise.” Several tasters said it reminded them of Luden’s cherry cough drops; in a good way. It too scored better the four stars at a reasonable $28.

Last but not least was the 2011 Casisano Brunello di Montalcino from Tuscany. Chris scored it a perfect five, and enjoyed the gripping tannins and lively acidity and said he’d “love to try it again in 10 years.” Ken called it “intriguing and inviting.” Jake said it was a “big, beautiful Brunello,” Brian simply said it was “elegant stuff.” It averaged better than four and a half stars and you should expect to pay just under $60 for it.