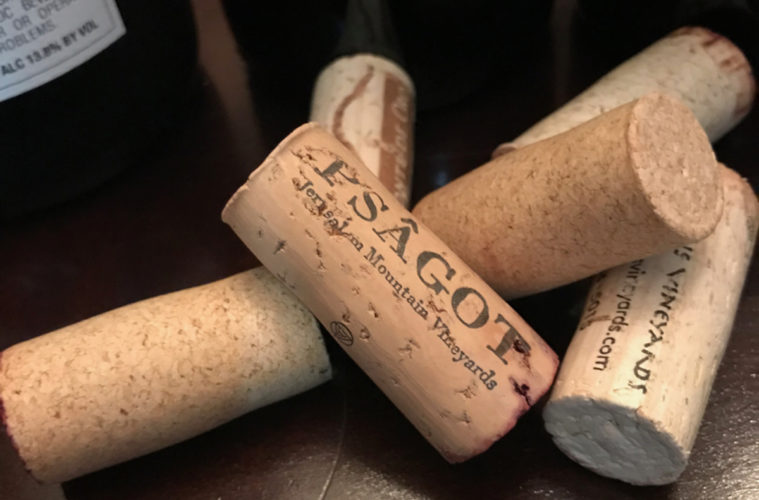 We get together a couple of times a month. We’ve been doing this for years, with the same people at the core, with some newcomers here and there. We all share a passion for wine and gather to share a few bottles and a few bites to eat. Tasting wine is what we love to do.

Saturday Night Live has been a fixture for nearly half a century. Now while you watch the show, you can enjoy wines based on characters or skits from the show. The 2016 Debbie Downer Chardonnay hails from Southeast Australia. I found it had a soft nose with green apple and lemon on the palate. Brian called it “clean, austere and minerally” while Kim thought it was “one-dimensional.” Ken found it subtle. At $20, It scored slightly better than three stars.

Next from the SNL series we tasted the 2016 Live From New York It’s Saturday Night Red Blend from California. Laura said it was full-bodied, but just ok. Wanda loved it, calling it smooth, balanced and delightful and an incredible value at $20. Other tasters picked up both lavender and vanilla. It also sells for $20 and received a score of just about three stars from our tasters. We had one wine remaining from that lineup, the 2015 The Californians Merlot. I liked its expressive nose and plentiful fruit on the palate, calling it a good value at $20. Kat liked the smooth finish and price. Al felt it needed a couple more years in the bottle. Kim said it didn’t float her boat. It, too, scored about three stars.

We moved to Israel for our next wine for the 2014 Psâgot Merlot. I’ve only had Israeli whites before, and loved its deep color and bold nose. Kathy called it her favorite of the night. Kim called it “chocolate yumminess.” Brian said “This wine has maturity and depth. One to savor and enjoy all night long.” It scored better than four stars and it sells for $25.

We ended with bubbles, the Vilarnau Brut Sparkling Cava. It comes in a beautiful, colorful bottle. Kat said it was too good to use in Mimosas. She’d enjoy it morning, noon and night. I liked its pretty pink color and abundant bubbles. Kim on the other hand found it too bubbly. Brian said it was a “nice summer afternoon fizz.” Scott was blown away by how good it was for the $14 price tag and felt it put a lot of the competition to shame. It scored better than four stars.

Tom Plant launched WINEormous, a food, wine and travel blog in 2009 and is a long-time member of the International Food Wine and Travel Writers Association. Based in Temecula, California, he offers intimate winery tours for no more than seven people. He is a two-time recipient of an award from the Luxury Travel Guide in Birmingham, England. Tour details and pricing are available at www.temecula-tours.com. Call now to book your Temecula Winery Tour at (951) 907-9701! Ask about special discounts.