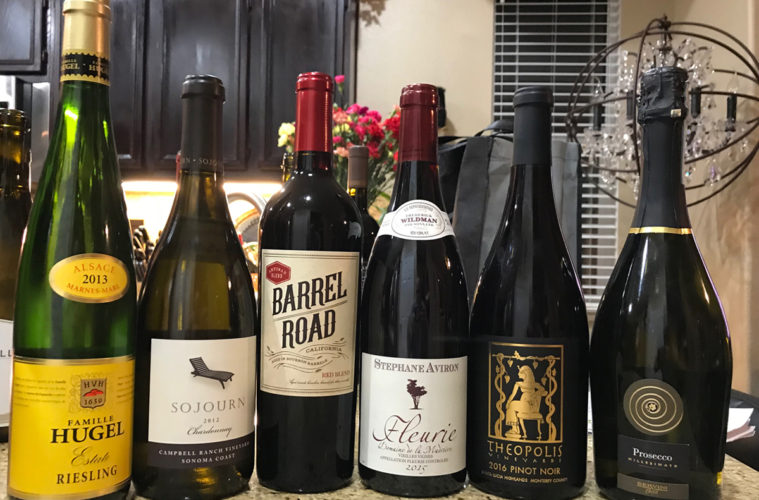 Our group has become pretty tight-knit. We gather every other week or so, tasting wine, socializing and sharing food. Scott and Wanda are recent transplants to the Temecula Valley, and so far they absolutely love living here. They graciously invited us into their home. Wanda is a hostess extraordinaire.

On a mid-November evening, we began our tasting with an Alsatian Riesling, the Hugel 2013. I loved its expressive nose and the way it exploded on the palate. I found it crisp and clean. Ken loved the nose and found peach and apple on the palate. Wanda called it a nice value at $21. Kim said the nose was lovely, calling it “very subtle and not too sweet.” It earned four out of a possible five stars from our group.

Next was the Sojourn 2013 Campbell Ranch Chardonnay from Sonoma fermented in 20% new French oak barrels. Wanda loved everything about it, the nose and its “lovely” flavor. Ken called it luscious and wonderful with butter, lemon and some pineapple. Jan isn’t a Chardonnay fan, but liked that it wasn’t over-oaked and thought it was “very drinkable for a Chardonnay. Kim said “yum” and called it clean and refreshing. Scott said it was a solid Chardonnay. A few balked at the $45 price, and it scored just under four stars. Our third wine and first red was the 2015 Barrel Road Bourbon Barrel Red Blend. Grapes from California’s Central Coast spend three months in bourbon soaked barrels. Scott called it great marketing and the right blend and the right price, $17. Al said he liked the color and nothing else. Jim said it was very good at the price with lots of licorice. Judi said it was a good appetizer wine. It scored about three and a half stars.

Next was the 2015 Domaine de la Madrière Fleurie from Beaujolais. The must is macerated for 12 to 15 days in stainless steel vats before aging 12 to 14 months in a combination of new and one and two-year old oak barrels. Ken remarked on the “amazing in-your-face nose.” I thought it was lively on the palate, well-balanced and food-friendly. Scott found a hint of strawberry on the nose and thought it was fantastic at the $19 price. It scored just over three stars.

We moved on to a 2016 Theopolis Vineyards Pinot Noir with fruit sourced from the Santa Lucia Highlands. I met Theodora Lee, aka Theo-patra at an LA wine tasting last year. After tasting her wines, I asked if she might send us some wines to taste. This Pinot spent 10 month in one-year old and neutral French barrels. Judi felt it was too young, but should age nicely. Wanda loved it saying it had a beautiful nose and a perfect smoke finish. Ken said the nose was “wonderful, wonderful” and said it was very smooth. Jim said “wow, nice nose, needs age, well-priced.” At $45 it scored four and a half stars.

You may know I like to start or end with bubbles, so we finished with the Bervini 1955 Extra Dry Prosecco, 2016 vintage. Jan enjoyed it and thought it was a good value. Kim said “yummy” – pear and bubbles. Ken liked its balance and acidity and called it a good value at $19. Scott said its was very nice and gave it five stars. It also racked up four and a half stars.