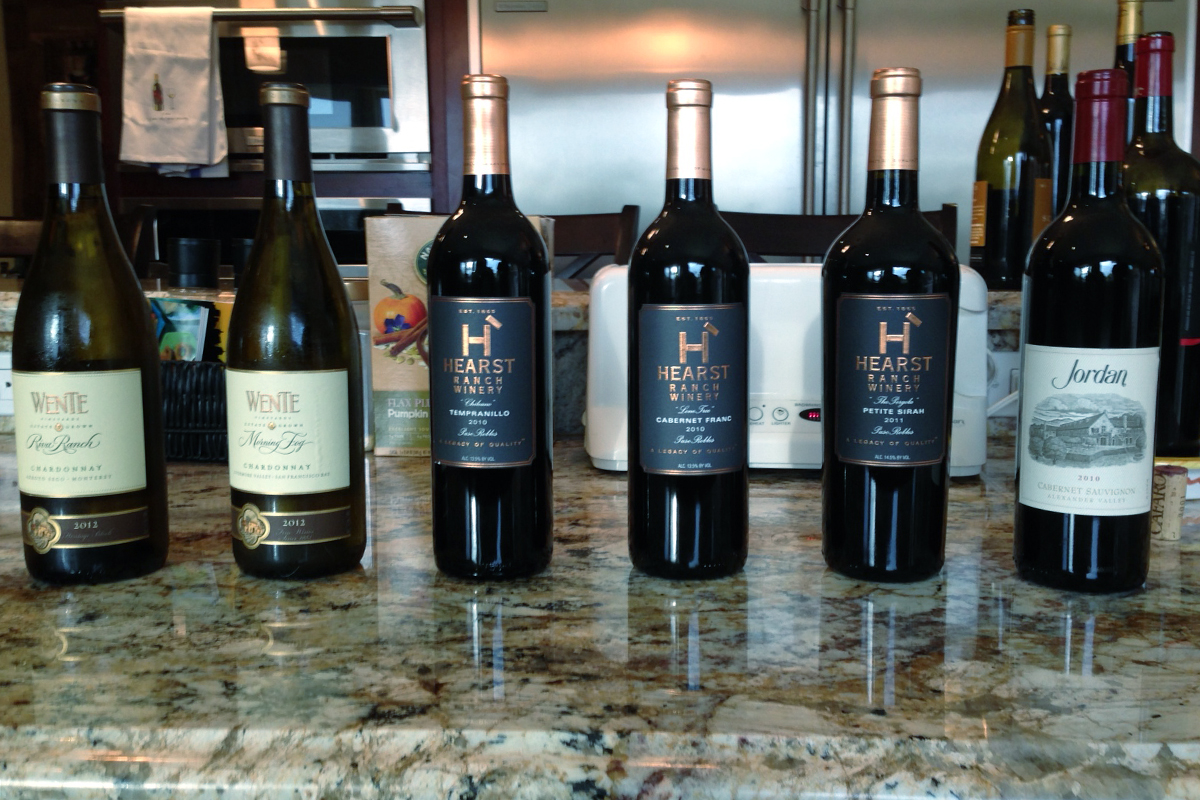 An All California Tasting We’ve gathered several times this year, poured wine in our glasses, shared food and conversation and the occasional cigar. Jean and Al were our hosts on a mid-April evening and the star of the show was Hearst Ranch Winery. We began with Wente’s 2012 “Morning Fog” Chardonnay from Livermore. I’ve tasted several wines from Wente over the past year and have grown quite fond of them. Chris noted it amber appearance, apricot and grapefruit on the nose extending to the palate and liked the way it coated his palate. Ken found it light, but nicely fruity and very smooth, giving it three and a half out of five stars. I loved the nose and lingering finish. At $12 a bottle many said they’d buy a case.

We had the first of three wines from Hearst Ranch Winery. I first tasted them at the Family Winemakers of California event earlier this year in Pasadena. Their 2010 “Chileano” Tempranillo was first up. Chris liked the deep ruby color, dark berry and cherry, balanced tannic structure and long smooth finish. I thought it had a lot of spice and an earthy nose. There was blackberry and black pepper on the palate. Giving this wine time to open up in the glass will definitely reward you. Retail price is $30 and it averaged between three and a half and four stars.

The second of three wines from Hearst Ranch was their 2010 “Lone Tree” Cabernet Franc. Robb found it complex and drinking very well, with silky tannins and a little pepper on the palate and finish. Al found it complex, too, rich and full-bodied with a beautiful finish. Chris liked its true Bordeaux style and found it a nicely balanced wine with a long, satisfying finish. The group gave it better than four stars and it sells for about $35.

The last offering from Hearst Ranch Winery was 2011 “The Pergola” Petite Sirah. Jean liked the nose and light acidity. Robb called it “by far the wine of the night.” Al said “Wow. Sold.” I liked the balance and the long finish. At $25, it averaged over four stars.

Last we tasted the Jordan 2010 Cabernet Sauvignon from Sonoma. Ken enjoyed it, but recommended you “put it to bed for a while” and check back later. Chris liked its austere nose, superb tannic balance and smooth satisfying finish, but also felt it will be better in three to five years. Debi gave it a perfect five-star score. It retails for $55.