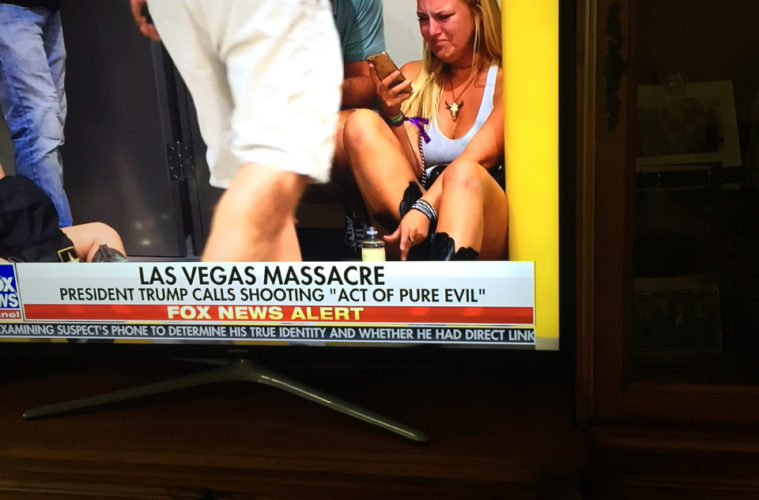 I’ve known Bill Wilson for close to 10 years. When I saw him recently at Wilson Creek Winery‘s staff and family harvest celebration, he told me that he was in Las Vegas with his wife and daughter  last year at the mass shooting at the Route 91 concert. For a time he didn’t know whether or not they were alive. He told me what a life-changing event that had been for him. Intrigued, I made an appointment to sit down with him to hear the story. I’d like to share it with you.

He had been enduring a brutal week at work. The last two-day session of a two-year executive coaching period had begun. The trainer was intense, “almost to the point of being mean.” Bill couldn’t figure out whether he was trying to prove they still needed another year of his coaching or if he was just trying to piss everyone off to stand up with Bill against him. “He had his foot on my throat,” and his methods weren’t well received by anyone. The sessions were followed by another meeting on Wednesday and then a strategy meeting on Thursday. He was frazzled. His wife and daughter were part of a group of eight women who had been planning a “girls trip” to Las Vegas. Route 91 was a three-night concert Friday through Sunday. He’d been given the opportunity to sponsor a couple of country music events with Live Nation and wanted to check it out firsthand and see if there was a potential to make money. When they arrived in Vegas his head was still reeling. “Am I that bad? Is my team that bad?” He was also still trying to wrap his head around the Big Hairy Audacious Goal they had set – to sell one million cases of wine in 2026.

On Friday they went to the concert, checked out the event, took pictures and unwound. “It was awesome.” They spent Saturday poolside and Bill truly believed the opportunity could be just what he was looking for. He was mentally in. He also wanted to see Big & Rich who were scheduled to perform in two weeks at Wilson Creek. On Sunday evening there was a tribute to first responders and the crowd broke out into God Bless America. Ironically he remembers hearing someone say “you guys allow us to do this in safety and comfort.”

When Jason Aldean took the stage, Bill headed for the restroom. He know the crowds would be smaller than during a break between acts. As he was walking, he thought he heard firecrackers. He thought it was kids messing around and was angry and thought it was ridiculous. He heard another set of popping noises and saw people running. A man said to him “you need to go that way. Those are gunshots.” Bill asked the man if he was sure and he responded he had just seen a lady get her head blown off.

Bill said he knew instantly it was Jennifer, his wife. He rushed into the crowd while everyone else was rushing out. He found two women that were part of his group. They ducked under the bleachers and he asked them if they had seen his wife and daughter. “No,” one of them said, “but I have her cell phone.” He couldn’t understand why she had Jennifer’s phone. “Don’t worry, Bill. I dropped mine, too.” He kept wanting to go out and find his family. The women told him that his wife would want him to live. “Stay here and help take care of us. You’re not dying here tonight.”

There were six other members of the group out there including his wife and daughter. They got bits and pieces of information, much of it incorrect. He pictured fully armored shooters walking through the crowd. He continued hearing gunfire and bullets ricocheting. “The amount of life and death decision-making based on misinformation was incredible.” They heard a voice telling everyone to go in a certain direction. The women agreed they should move, so as they were leaving they passed a field littered with bodies. He was convinced his wife was out there and he felt completely helpless. He was supposed to be her protector, yet he wasn’t even with her. First responders were putting people in triage. They exited across the field and into a corporate tent. “If you’re shot or hurt, please go left. If not, exit right and go north.” There was a u-shaped formation of big rigs and semis with a Chevy Suburban in the middle. One of the women climbed underneath for safety. Bill made his way to the Tropicana and finally got a phone call from his wife about midnight. She told him she was fine, and so was their daughter, who had climbed a 12 foot high fence and made her way to the airport. Others who climbed the same fence sustained self-inflicted injuries from sheer panic.

While waiting for what their next move was, Bill looked around the room and saw signs reading Do Your Best!, Be Good!,  and Smile! He chuckled a bit, remembering the executive coach saying if you need to hang banners to to remind employees of your core values, you’ve missed the mark completely. “They missed it here” he mused to himself.

Bill and Jennifer reunited with the group they had come with while they sat and waited. Cell phone batteries were at dangerously low levels and they needed to conserve as much battery life as they could. He ran into a friend who lived in Las Vegas, his “angel” he called her, at 1:30. Her brother worked at the Metro Police Department and she relayed the news that there was one shooter, confirmed dead. Everyone in their group was safe, but they were under lockdown. His friend had a power cord, so they took turns charging their phones which were by now at 4% – 6% battery. No one slept. “We sat there and loved on each other.” They talked about the importance of family and friends. They still didn’t know the full scope of the tragedy – 58 dead and several hundred wounded. In an Uber ride he got a phone call from KROG radio, who put him on the air for a live interview. He bawled as he shared how blessed they were to be alive and how full of love he was for his family. At 11am, they finally were reunited with their daughter.

They shared stories of where they had been, where they ran and what they did. “All the problems you think you have all of a sudden become minuscule.” “Look how beautiful the sky is!” He found a skip in his step, and everything he had been so distraught about the week before now seemed meaningless. It put everything into perspective for him. He knew it was time to return to core values and core purposes – “to enhance lives” of employees and guests. “The more lives we enhance by making wine fun and approachable, and doing it profitably, we’re going to have a better business that anything on this planet.” It dawned on him that some of the stuff he was hanging onto was b.s. He stopped freaking out and yelling at company meetings. While others were fighting for their lives, he knew he was blessed to be fighting for a better winery. His team put their arms around him and loved on him. To this day they help him get through it. One woman who works in the tasting room was there at the concert and she had her arm tattooed to commemorate the event.

Several people who were at the concert are still trying to move past what happened that October night. Several still attend support groups. His rallying cry is “Don’t let a mad man rent space in your head for free.” The winery held a concert with Big & Rich two weeks after the shootings and raised $8,000 for a victims’ fund. He had balcony seats for survivors in attendance so they could be away from the crowd. He knows the event made him a “better person for others.” He makes better decisions. He’s grateful for his staff and executive team. He is now part of a group he didn’t want to be a part of. He knows we all have to take care of each other. “That day changed how I thought of the world, how wonderful a life we all have. We should be thankful for it every single day, and thankful for our families.”

Tom Plant launched WINEormous in 2009 and is a member of the International Food Wine and Travel Writers Association. Based in Temecula, California, he offers intimate winery tours for no more than seven people. Tour details and pricing are available at www.temecula-tours.com. WINEormous is the recipient of the Luxury Travel Guide’s Wine Tour Operator of the Year award for Temecula 2015, 2016 and 2017 and the Lux Life Mag Best Customised Wine Tour Operator Temecula for 2018. Call now to book your Temecula Winery Tour at (951) 907-9701. Ask about special discounts.