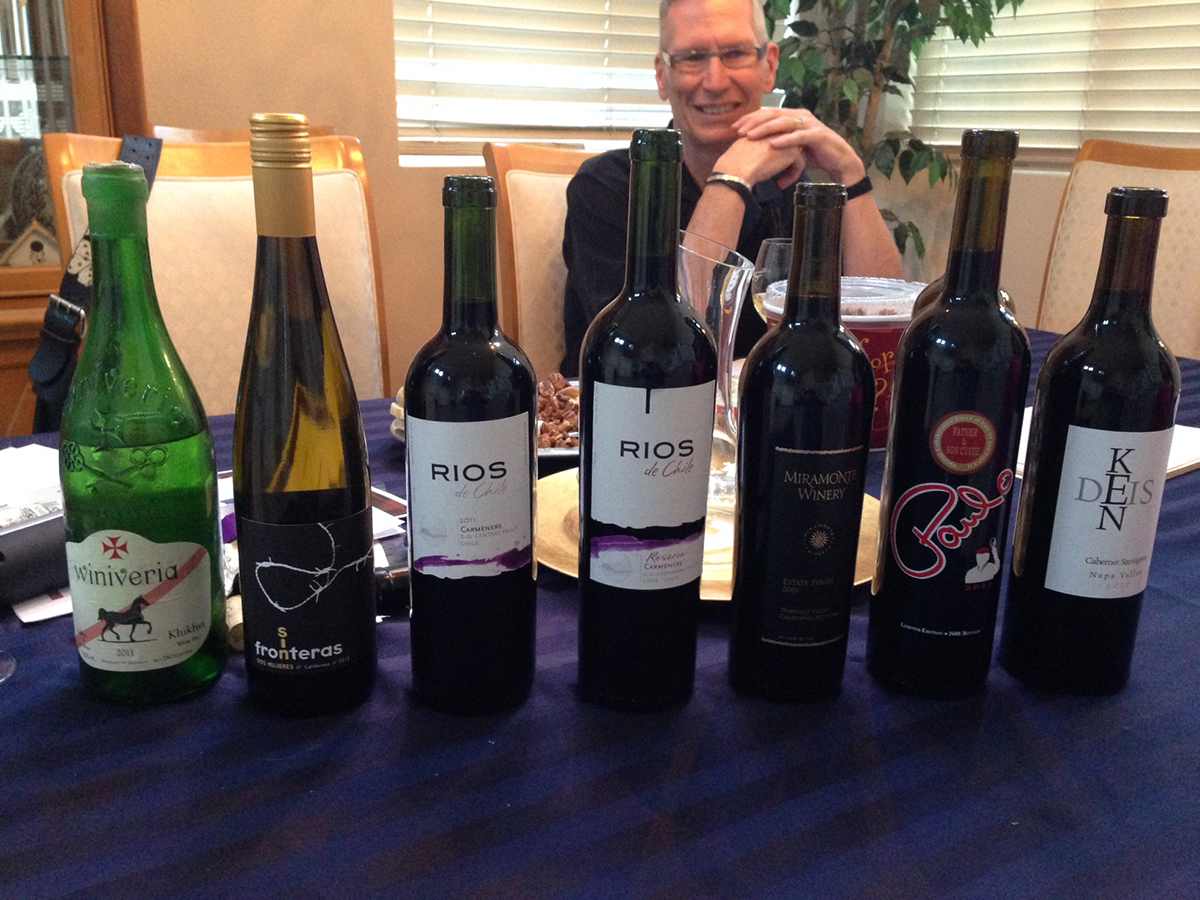 Wines We’ve Tasted – Lots To Catch Up On Since last I shared what’s been in our glasses we have gotten together several times. Rather than tell you about every single wine we sipped, I’m going to choose some of the better ones in an effort to bring this up to date. We’ve gathered at several different venues with tasty foods to share with luscious wines. In January we tasted Hart Winery‘s 2013 Blanc d’Franc, a Cabernet Franc rosé. Last year Hart released a Grenache rosé which was quite nice, but I was thrilled to see this one return. Several of us picked up watermelon and strawberry on the nose. Jake  thought it would be a great pizza or pasta wine and loved it with cheese. Al enjoyed its soft finish. The color is spectacular and it retails for $24. We also tasted the 2011 Murviedro Tempranillo from Valencia, Spain that night. My thanks to the Wine of the Month Club for this offering. Ken found it light, but well-balanced and liked how it paired with sausage. Chris enjoyed the ruby color and fruit nose of cherry and spice. Tony said “Very nice! I would buy this one!” Brian picked up ripe raspberries and liked the balanced acidity. You should be able to find it under $15. We ended this tasting with Vindemia‘s 2011 “More Cowbell” Zinfandel from Temecula. Al called it a lovely, well-structured Zin. I loved the cherry nose and pepper on the palate along with the lingering finish. Jake also loved it, calling it an excellent Zin with great extraction and color. It retails for $45.

We met a couple of times in February and tasted Francis Ford Coppola’s 2010 Director’s Pinot Noir. Chris gave it four out of five stars and liked the spice and fruit notes on the nose and said it was bursting with dark cherry. Char thought it was a beautiful, well-balanced Pinot. Ken also got cherries and spice and thought it was a great value at $17. Not all the tasters were fans. That was the first of three Pinots we tasted that night. Next we tried the 2012 Ca’ Momi Pinot Noir from Napa. Jake thought it was wonderful, with a candied fruit nose and well-integrated tannins. He awarded it four and a half stars. Finally we tasted Masut 2012 Mendocino County Pinot. Sandy found it very fruit forward with intense cherry on the nose. Brian said “pretty decent this. I’m getting sour cherries… Has layers.” It sells for around $37. Later that month we met at Amy’s and tasted the 2012 Sauvignon Blanc from Brancott Estate in New Zealand. Amy thought the nose was quite herbaceous and thought it was an excellent $10 wine. Chris thought it was dry and lively with a long tart finish. I thought it had a grassy nose with lime and pineapple on the palate. It goes for around $10. Next up was Ca’ Momi’s 2011 Carneros Reserve Pinot Noir. Chris loved the beautiful ruby color, nose of dark berries and cherries and its tannic balance. I thought it was silky and nuanced and giving it time in the glass to open makes a huge difference. Brian called it “a lovely Pinot. Plummy, peppery, smoky.” Suggested retail is $50. Monty Paulsen has brought his dad’s winery back to life. We tasted Pat Paulsen Vineyards 2011 Reserve Red Blend. Amy thought it was young and bright. Ken thought it was vibrant and an excellent blend and liked the $16 price point. Finally we tried the 2010 Francis Ford Coppola Director’s Cabernet Sauvignon. Amy found it a bit hot and that it needed time to open. Chris gave it four stars and was impressed with the earthy nose that flows to the palate. At $27 he found it nice for the price.

At the beginning of March we met at Chris and Debi’s home for an all red tasting, starting with Brancott Estate’s 2011 Marlborough Pinot Noir. Chris liked its fruit forward profile and thinks it will improve in a year or two. I liked the soft nose and pale color and found it very food friendly. Tony thought for $10 it was an excellent buy. We ended this evening with Ca’ Momi 2011 Napa Cabernet Sauvignon. Jan called it the best one of the night, well-balanced with lots of plum and smooth tannins. Tony was also enthusiastic, saying it’s drinking awesome for a 2011 and thinks in five years it will be amazing. Chris called it “the epitome of a California Cab.” It sells for around $20.

We had two more tastings in March, the first in Fallbrook at Tony and Alisa’s place. Naked Wines provided Carmen Stevens 2013 Angel’s Reserve Chenin Blanc from South Africa. If you’re not familiar with Naked Wines, you pay them $40 a month which they in turn invest in independent winemakers from around the world. Alisa called this wine crisp and refreshing and a super value at $10. Ken liked the subtle pear on the nose and melon on the palate. Amy liked it, too, and said it paired very well with limoncello cake. Two Temecula wines rounded out the night, starting with Lorimar Winery’s 2011 Sangiovese blend “Vivace.” Ken loved the nose of caramel and cinnamon. Kim called it a big, bold California style wine and enjoyed the blend. It sells for $38. Last up was Bel Vino’s 2011 Zinfandel. Tony said it was like a spicy Tootsie Roll. “Yum!” Brain said “I like this. It’s soft and coats the tongue with a velvety dark fruit. The Barry Manilow of wine.” It sells at the winery for $43. We met at Amy’s again and started out with two Carmeneres from Rios de Chile Winery. First was the 2011 vintage. Al called it rich and full-bodied and thought the $15 price point was terrific. Chris thought it was lively and spicy and thinks it will improve with a little age. I loved the earthy, leathery nose and thought it opened beautifully. Ken picked up earth and spice and liked it a lot. You ought to be able to find it for around $15. Next was the same vintage, but their Reserve Carmenere. Chris really liked the dark ruby color and great acidic balance. Al thought it was soft, refined and well-balanced. Ken found it more to his liking than the first with a complex nose and dark berry. Suggested retail is $20. We tasted Miramonte 2010 Estate Syrah from Temecula. Ken said it was just right with a blackberry nose and some caramel. Al called it the best Syrah in Temecula. It sells for $38. We moved to Texas to taste Messina Hof‘s 2011 Paulo Bordeaux blend. As usual, tasters were shocked to find that a Texas wine can be top quality. Chris said it was wonderful, dark ruby color, caramel with lots of dark fruit and a nice tannic balance. Al called it a wonderful Bordeaux style wine. “1st Texas wine… will have more!” It sells for $44. We ended with another selection from Naked Wines, the 2012 Ken Deis Napa Cabernet Sauvignon. Chris said it needs time to develop but enjoyed the deep color and fruit forward nose. On the other hand, Ken didn’t get much on the nose, but “the taste delivered what the nose didn’t promise.” Naked Wines has it for $20.