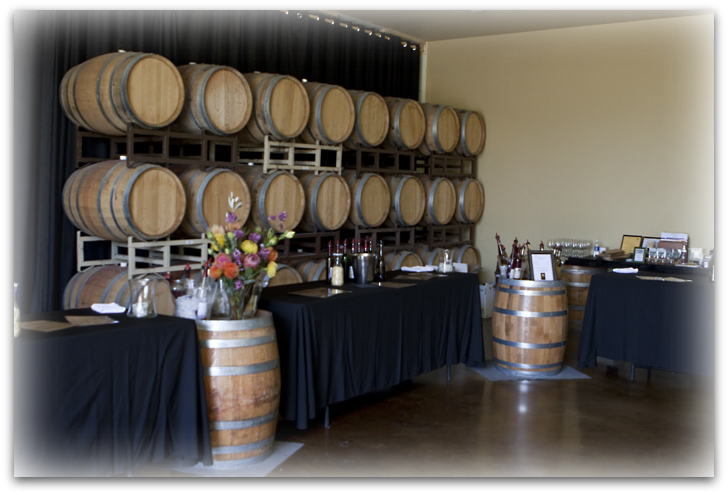 “If you’d told me a year ago that I’d be in Southern California as a winery owner I would have told you you were crazy!” Filsinger Winery was one of the first wineries in the Temecula Valley. William Doc Filsinger produced wines on the De Portola Wine Trail for nearly 30 years. Recently, Doc sold the property to Bob Olson and Filsinger Winery is being transformed into Danza del Sol. I met with Bob and his winemaker Mike Tingley recently, got a tour of the property and a look at some of the changes in the works.

Bob owned a software company for twenty years and lived in Minnesota. He retired in 2006 and took a few years off, spending a lot of time driving rally cars. He decided it was time to look for a new hobby and since he had always enjoyed wine tasting, he thought why not buy a winery. After looking around the Central Coast and not particularly caring for what he saw, he visited Temecula and it was love at first sight. Mike Tingley was the consultant for the REALTOR® who had Filsinger Winery listed on the market. Mike told Bob he felt there was good potential there and along the way they discovered they made a good team. Bob made the purchase and hired Mike as his General Manager and Winemaker. Bob feels there are three facets to owning and operating a winery: marketing, manufacturing and entertainment , and says you need to be good at all three. He says research and development is a perk and wants to present “some unique blends that people enjoy and that are different from what they get from anywhere else.” An extensive face-lift of the winery is well underway and his goal is to create a setting where people will want to stay a while. If you’re familiar with the Filsinger property, the changes are readily apparent. There’s a new patio and the tasting room has been moved. Near the road behind a newly constructed wall will be a water feature. “An artist can make a painting much more interesting with more colors, and I feel the same way about wine.” Mike Tingley has been a fixture in the Temecula Valley wine landscape for 30 years now. He arrived here in 1980 and was the first employee hired by Audrey and Vince Cilurzo in 1983. Back then, he says “we were thrilled to have anybody walk through the door, even on a Saturday afternoon.” Today, he notes correctly, you can barely get in the door of most wineries here on a weekend. He got his training on the job, first at Callaway Winery where he cleaned tanks and scrubbed floors. “I still pride myself on being able to clean a tank better than anybody else.” Everything about the wine industry fascinated him and he found himself curious about all aspects of the business. Then winemaker Steve O’Donnell took him under his wing and showed him the ropes. He attended several workshops at UC Davis and began collecting textbooks. He asked winemakers a lot of questions and learned by making mistakes. “I don’t make the same mistakes anymore, but I make different ones.”

When he eventually became the winemaker at Cilurzo Winery, he picked up more and more responsibilities and began to learn the various aspects of being a winemaker: how you organize a winery, how you appraoch governmental regulations, the things you can and can’t do, labeling requirements, ordering materials and other things you don’t get in the classroom. He says you need to be able to think on your feet and change and adapt quickly. “Everything around you is in a constant state of change and you have to be able to adapt very quickly and very decisively.” Every year, he says, the grapes are different and your approach has to change with the grapes. He says it’s a constant learning experience. According to Mike, harvest is the fun time for any winemaker – seven days a week and a lot of hours. Mike used to be in the music industry, so he has a creative side, but in school he excelled in sciences. Since making wine is a blend of science and art, the fit was perfect. Making wine allows him to feed both sides of his brain. He says sometimes you need to throw the numbers out the window and trust your palate. The bottom line is how the wine tastes. Danza del Sol has Old Vine Zinfandel, Cabernet Sauvignon, Cabernet Franc, Petit Verdot, Tempranillo Sauvignon Blanc, Viognier and Gewürztraminer planted and he wants to add Orange Muscat, Grenache, Syrah, Arneis, Roussanne, Vermentino and Sangiovese and take the winery in a more Mediterranean direction.

Bottling will begin soon on the first wines to carry the Danza del Sol label – Dos Blancos and Tempranillo. Mike found some Chardonnay that he felt had spent too long in oak and a Sauvignon Blanc that had been tank fermented. He played around with the blend, settling  on 75% Sauvignon Blanc and 25% Chardonnay. He tasted the 2009 Tempranillo and even though it was extremely young he felt it was ready to go, too. He put some of each wine in bottles and let visitors to the tasting room voice their opinions. Both wines won overwhelming approval and bottling starts this week. I tasted the Tempranillo yesterday and it really is a solid wine. What will wind up in bottle will have a little bit of Zinfandel added to make it more fruit forward.

Mike says he doesn’t feel restricted be tradition. He wants Danza del Sol to be known for proprietary blends you won’t find anywhere else. “We’re going to play around. We’ll be mixing it up. It keeps it fun for me as a winemaker.” I’m excited by the changes I’m witnessing at Danza del Sol. Pay them a visit when you get the chance.