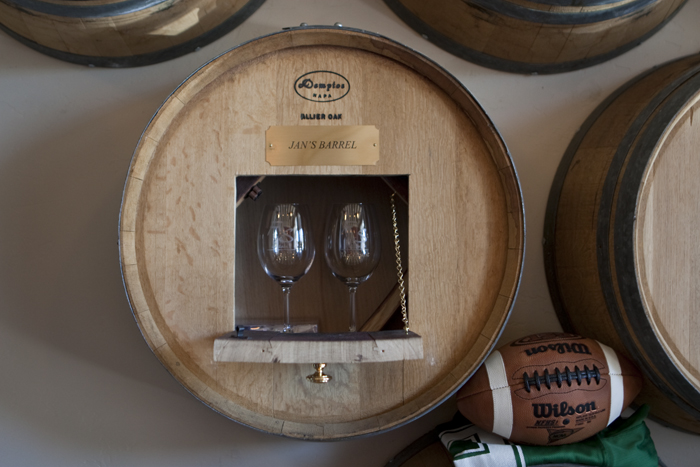 Back Home Again In Paso Robles We headed home from a visit to the Sierra Foothills with one stop remaining. Paso Robles. My wife Laura and I made our first stop in Paso in the Spring of 2008. I’ve lost count, but I believe we have been back ten or eleven times since then. We pulled into town on the afternoon of May 5th and checked into our motel. I paid a quick visit to Windward Vineyard, chatted with owner/winemaker Marc Goldberg and did a bit of tasting. Windward only offers one varietal: Pinot Noir. Different vintages from the Monopole Vineyard and Barrel Select are available for tasting, and you can se smell and taste the care that goes into them. The nose is a joy and they present a classic Pinot experience. Since it was Cinco de Mayo, we thought it only fitting to meet our friend DeDee Morrison and her daughter Shannon for Mexican food and margaritas at Señor Sancho’s. The 5th fell on a Wednesday which is Winemaker Wednesday at Vinoteca. When we walked in the door, it became evident quite quickly how many people we’ve met in this great wine region. I saw seven different winemakers I knew, including Roger Nicolas from RN Estate and Joe Farley from F/S Cellars. We also met Denis Degher from Domaine Degher and made arrangements to visit his vineyard the following morning. Winemaker Wednesday is always enjoyable. A local winemaker is on hand and a flight of their wine is offered along with food specifically paired with each wine by the Executive Chef. The winery that evening was Bodegas Paso Robles. We met and visited with owner/winemaker Dorothy Schuler and sampled some of her wines which are primarily Spanish and Portuguese varietals and blends. We’re going to spend some time with Dorothy on our next visit and will go into more depth on her wines. The next morning after breakfast we drove north on the 101 and paid a visit to Denis Degher, aka Sleepy Guitar Johnson at his Domaine Degher. We soaked in the panoramic view from his property while we enjoyed his wines and listened to his music. Denis’ past career as a recording engineer is evident everywhere you look. There are Gold Records on the walls and a recording studio where he makes his CDs. His Mojo blend is primarily a Syrah and Cabernet blend as is his Red Zone. The ’07 Cabernet, although young, promises to mature into a magnificent example of the varietal. While we waited for Joe Farley to open F/S Cellars, we walked next door to WCP Cellars and met and visited with Winemaker/Owner Will Persall and his partner Taddeus. They were gearing up for their grand opening the next day, but were gracious enough to spend time with us, let us taste their wines and have a good visit. They were kind enough to send us home with a bottle of Harmonious, a Syrah and Cab Franc Blend along with a bottle of their Cabernet which I will be reviewing in the near future. Production is very limited and many of their releases have already sold out. I met Joe Farley on the golf course at Temecula Creek Inn about a month ago at the Cellar Masters golf tournament. He sent me home with a bottle of his Mourvèdre and an invitation to visit him in Paso. We started off with his Chardonnay and enjoyed it immensely. Joe says it’s terrific with lemon pepper chicken and we brought home a bottle and will try it. It’s rare to see a stand alone Mourvèdre, but Joe’s is exquisite as is his Petite Sirah. His late harvest Syrah is almost orgasmic. I don’t know when we’ll make our way back to Paso Robles next, but I do know each visit is a distinct treat and always filled with a surprise or two.