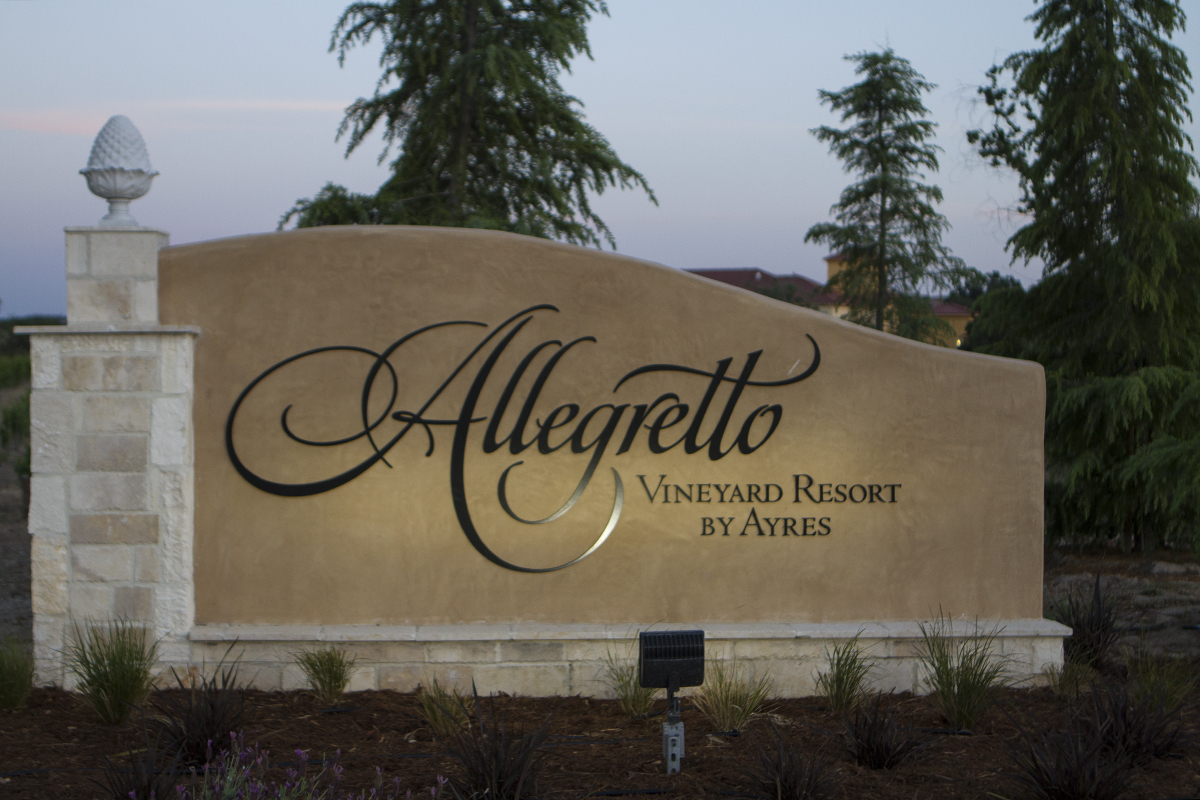 Paso Robles has been a favorite destination of mine since I first visited there in 2009. The wines are exceptional, the people are down-to-earth and gracious and the scenery is varied and spectacular. I’d been hearing a lot of buzz about the Allegretto Vineyard Resort and was anxious to stay there and see if it lived up to the hype. It did, and then some. Doug Ayres’ love affair with Paso began about 15 years ago. His family operates a small group of boutique hotels in Southern California called Ayres Hotels. His dream was to build a hotel on a vineyard. That dream became reality in September, 2015 when the Allegretto opened surrounded by a 20 acre vineyard. Doug is the epitome of a hands-on owner. He’ll often introduce himself to guests as the gardener and indeed much of what is growing at the resort was planted by Ayres. An avid traveler and art collector, the resort has touches of his world travels throughout. You’ll find Buddhas and Asian and European art pieces perfectly placed everywhere you turn in Allegretto. There’s a 12,000 square foot courtyard and if you relax in it just long enough you may just forget you’re not at a Tuscan Villa. Allegretto has 171 impeccably appointed guest rooms as well as a fitness center and a spa. There are several outdoor fire pits and if your desire is al fresco dining at night, by all means indulge yourself. After a peaceful sleep on the oh so comfortable Dream Sleeper pillow top mattress, we went downstairs for breakfast at Cello Ristorante. Food and Beverage Manager Thomas Humphrey greeted us while we savored duck hash with quail eggs and divine coffee. We sat down with Executive Chef Eric Olson and I loved his philosophy on food and service. This man exudes passion. He’s “been around the world two or three times” first with the military and then on a culinary adventure. Military food was “horrendous”, so he’d often go AWOL with his buddies for good food. He loved to cook pancakes and barbecue for the barracks. He started cooking at age 16. His mom was a home economist and model who cooked on tv. He would stay at home and watch her. She married an Italian doctor who had tomatoes and basil in the front yard instead of a lawn. At one time the Napa Valley had a culinary school that only admitted students who earned a scholarship. Out of 1500 applicants, they accepted eight. Chef Eric was one of the eight. “I think you better have it in your blood.” In his 50s he built the world’s largest food truck business. “That’s a young man’s sport.” The more time he spends on the Central Coast, the more he’s convinced it will take or surpass other regions not only in California, but globally. His produce is all organic, either from his garden or from local farmers, “hippy girls” he says with a smile. They cook local lamb and venison as well as sustainable seafood on the kitchen’s oak grill and often add almond wood to the mix. “We’re trying to create memories.” He wants his servers to guide diners through an experience. “We have the finest wines, the best ingredients and one of the best locations.” Wolfgang Puck taught him it’s important to remove the layers between the kitchen and the customer. If he’s in the dining room, don’t be surprised it he serves your meal, your wine, or prepares your cocktail. One reason we were in the area was to attend Earth Day Food and Wine at Castoro Cellars. Mother Nature had clearly gotten the memo as we were blessed with a sun-drenched afternoon. Dozens of vintners, brewers and restaurateurs offered samples of their delights. There were even a few fine feathered friends among the Homo sapiens. We joined some fellow writers for a farewell luncheon the following day and Chef Eric and Food and Beverage Manager Thomas joined us in a most memorable meal. Plate after plate appeared from the kitchen. Duck with tangerine and rhubarb, squab with wild mushroom, local shrimp with saffron served on a spoon, diver scallops with buttermilk corn, and filet mignon with fig and cilantro. We savored a classic Reuben while other guests feasted on black bean burgers and mouth-watering salads. Mixologist Alexandra chatted with us and prepared specialty cocktails based on our spirit preferences. Allegretto more than lives up to its reputation.  Do yourself a favor and check it out.