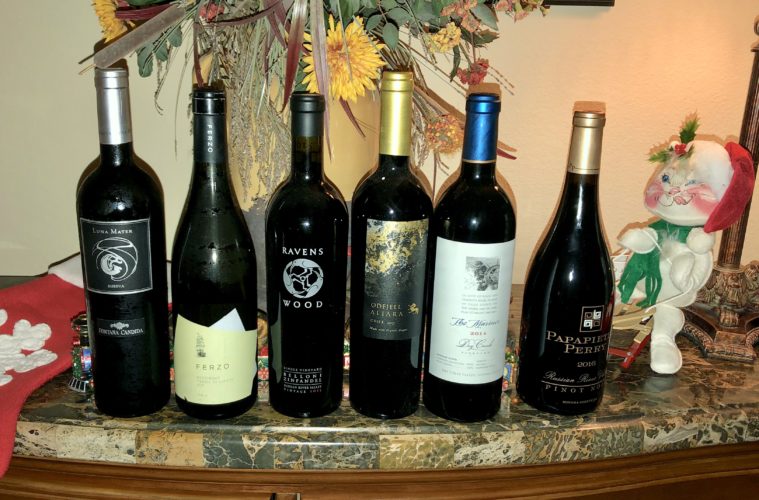 We met at Kim and Brian’s house in late November. I brought six wines to share and Kim and Brian went all out preparing a fabulous food spread to go with tasting wines. Our first wine was Italian, the 2012 Fontana Candida Luna Mater Riserva. Rose called it nice and light. Jean and Al enjoyed the nose and said it was crisp and easy drinking. Wanda called it “delightful” and loved the cool bottle. Not everyone was a fan. Kim said it was like oily transmission fluid and Brian called it a little harsh. The blend of Malvasia di Candi, Malvasia del Lazio, Greco and Bombino sells for $10 and received three out of a possible five stars.

Next was the Ferzo 2017 Pecorino from Italy. Lisa liked the nose and called the wine fruity. Wanda called it well-balanced and very enjoyable. I thought it was clean and crisp. David found it paired well with food. Brian said it was a bit bland and sweet. Ken thought it was a bit over priced at $26. It scored a little more than three stars.

The 2015 Ravenswood Belloni Zinfandel from the Russian River region of Sonoma County was next. It spends 19 months in French oak, 25% new. Tony called it a “great Zin” and loved that it wasn’t jammy. Ken thought it was a bit dry. Kim said it had just enough spice. I thought it had a wonderful nose and was a. complex wine with plenty of pepper. Priced at $39, it scored just above three and a half stars.

Odfjell Vineyards 2013 Aliara  hails from three different regions in Chile. A blend of Carignan, Malbec and Syrah,  Tony felt it had just enough softness and tannins. Ken enjoyed the spice on the nose and picked up dark berries and bacon on the palate. Kim called it floral and juicy. Brian called it “serious stuff – It’s juicy and fruity, but with a darkly mineral backbone.” At $44, it scored just above four stars.

Dry Creek Vineyards is a favorite of our group and the 2014 The Mariner Meritage was a hit. A blend of 62% Cabernet Sauvignon, 12% Petit Verdot, 9% Merlot, 8% Malbec and 2% Cabernet Franc, Ken found it to be delightful. Kim simply said “Dry Creek does not disappoint.” Brian called it “lovely stuff.” David said he felt it needed four to six years for the tannins to soften. Wanda called it awesome. Selling for $45, it scored four and a quarter stars.

We ended our feast for the senses with the 2016 Papapietro Perry Pinot Noir Russian River Valley Pinot Noir. Sourced from five vineyards, Ken loved the nose and called it silky on the tongue and delicious. “Ding, ding, ding. We have a winner!” Kim said “It tastes like I want more.” Brian called it a delicious Pinot. “Subtle and earthy, there’s fruit and a depth of flavor here. A fabulous wine.” For me it was heaven in a glass. It scored better than four and a half stars and it retails for $55.

Tom Plant launched WINEormous in 2009 and is a member of the International Food Wine and Travel Writers Association. Based in Temecula, California, he offers intimate winery tours for no more than seven people. Tour details and pricing are available at www.temecula-tours.com. WINEormous is the recipient of the Luxury Travel Guide’s Wine Tour Operator of the Year award for Temecula 2016, 2017 and 2018 and the Lux Life Mag Best Customised Wine Tour Operator Temecula for 2019. Call now to book your Temecula Winery Tour at (951) 907-9701. Ask about special discounts.