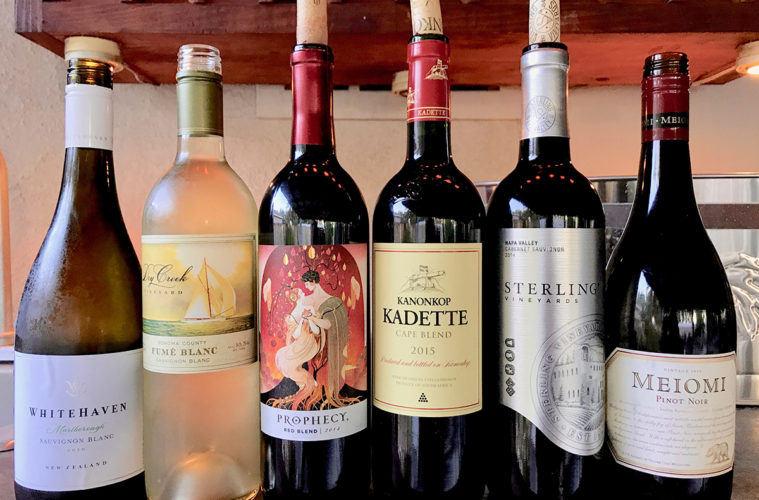 Catching Up On Wine Tastings

This year is simply flying by. It’s hard to believe it was on a July summer evening that we met at Jim and Judi’s place for wine, food and conversation. I brought the wines, others brought a variety of tasty foods. We were all set for another round of wine tastings. First up was Whitehaven’s 2016 New Zealand Sauvignon Blanc. Ken loved the nose and called the wine refreshing and very peachy with a dash of orange. Al enjoyed its big fruity finish. Laura said it was nice and dry. I liked its crispness and picked up pineapple and citrus notes. At $20, it scored a solid four out of five stars from our group.

This group tends to love wines from Dry Creek Vineyard, so they were anxious to taste the 2016 Sonoma Fumé Blanc. Dry Creek’s founder David Stare was the first to plant Sauvignon Blanc in Dry Creek Valley. Fermented and aged 100% in stainless steel, I felt the nose was much softer than the New Zealand wine as was the wine itself. Al called it soft, elegant and fruit forward. Ken said it was very nice and drinkable. It scored just over three stars and it sells for $15.

The evening’s first red was the Red Blend from Prophecy. This blend of fruit from California and Washington was generally well received. Brian said it was a “great bargain, actually” at $10. Laura called it smooth with a lot of cherry. Judi thought it was very well-balanced, while her husband Jim called it “soft, not complex but easy drinking. Fantastic at $10!” It scored nearly four stars.

The next wine was from South Africa, the 2015 Kadette Kanonkop is a blend of Pinotage, Cabernet Sauvignon and Merlot. Lisa found it fruity, earthy and spicy. Ken called it a total winner. Brian said it had European characteristics with a “Brambly nettliness.” Jim enjoyed the floral nose. At $15, it earned roughly three and a half stars.

From the Napa Valley we tasted Sterling Vineyards 2014 Cabernet Sauvignon, aged 18 months in American, France and European oak. Jim felt it would age well, but that it needs at least two years. Brian enjoyed its lovely color and called it darkly fruity. Laura and Jim both thought it was average. Al said it should be good in a couple of years. It scored around three stars and it sells for $25.

We end our gathering with Meiomi’s 2016 California Pinot Noir made with fruit from Monterey, Santa Barbara and Sonoma Counties. Ken said although it was quite young, he liked it. Brian found it quite sweet, but “fairly decent.” Judi called it well-balanced and easy to drink. I found it a solid Pinot for $17. It scored four stars.