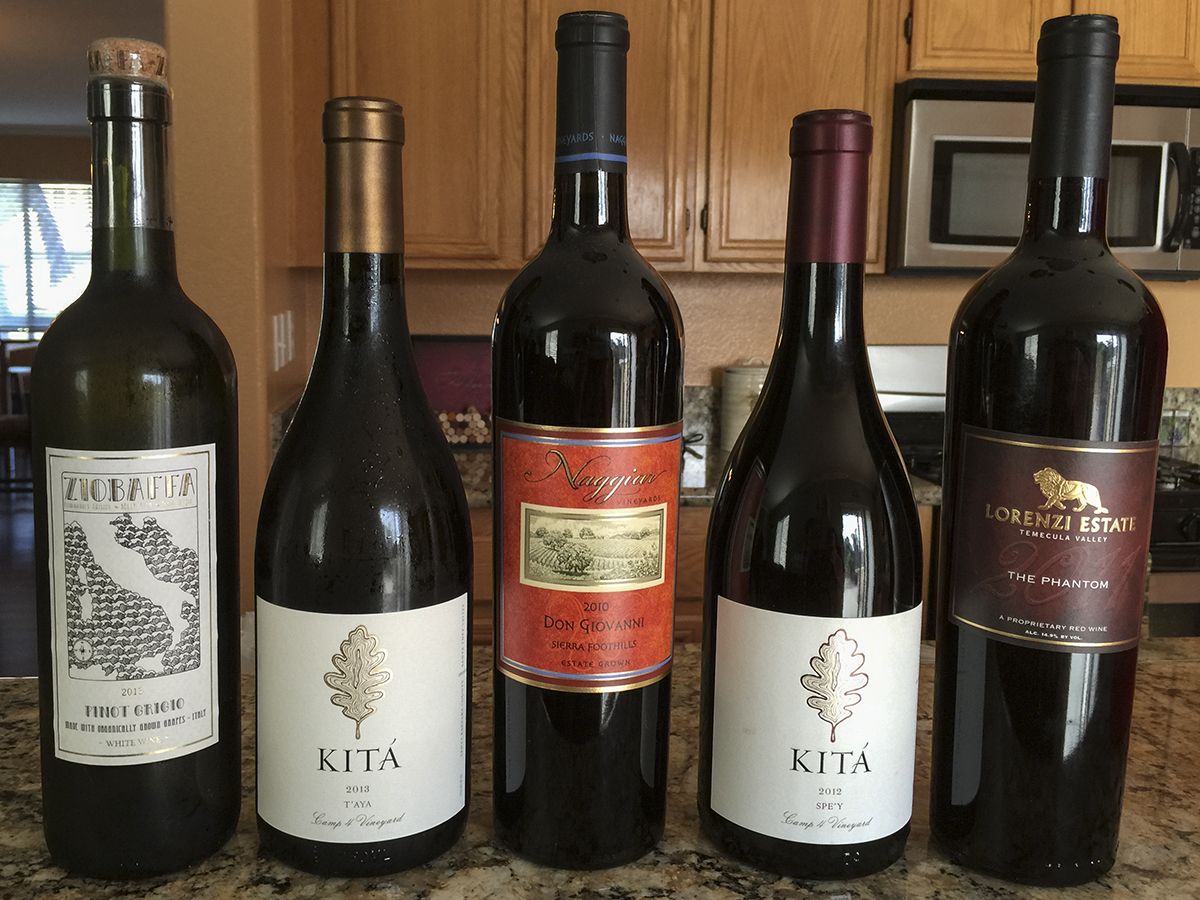 Pat and Yuki welcomed us into their home. Yuki makes amazing sushi and it was a great match for the wines I had brought with me. We began with the ZIOBAFFA 2013 Organic Pinot Grigio from Italy. Al called it light and soft, quite dry. Pat thought it was refreshing and semi-sweet. I enjoyed the bright acidity and thought it was a great wine with cheese. Our tasters gave it an average score of three and a half out of a possible five stars. It sells for around $17.

I’ve been loving the wines from Kitá in Lompoc and on this evening we tasted the 2013 T’aya Rhône blend. Chris noted hints of citrus and pineapple on the nose, clean acid balance and a nice lingering finish. Al thought it was a bit tart on the finish, but enjoyed the pineapple on the nose. Kim got butterscotch on the nose and also found the finish slightly bitter. At $22 it averaged about three and a quarter stars.

From the Sierra Foothills we tasted Naggiar Vineyards 2010 Don Giovanni blend of Cabernet Franc, Mourvedre and Zinfandel. Chris got blackberry and cherry on the nose and called it “bursting with black cherry and blueberry” on the palate. He called it very nice for the $25 price. Brian noted inky, dark, black cherries and cocoa. “Terrific value!” I found it fruit forward and very well-balanced. Kim called it smokey and spicy. It scored better than four stars.

We moved on to another wine from Kitá, their 2013 S’pey red Rhône blend. Esther called it very nice. Al found it to be Old World in style. Yuki thought the nose was beautiful and liked the color and finish. Chris enjoyed the long, silky finish. It scored just under four stars and it sells for $30.

We ended the evening with a yet to be released wine, 2011 “The Phantom” from Lorenzi Vineyards in Temecula. Al loved the nose and the wine. Chris commented on the dark ruby color with chocolate and dried cherries on the nose and thought it was nuanced. I got lots of currant and black cherry on the nose and loads of fruit on the palate. It averaged about four stars and the price hasn’t been set yet.