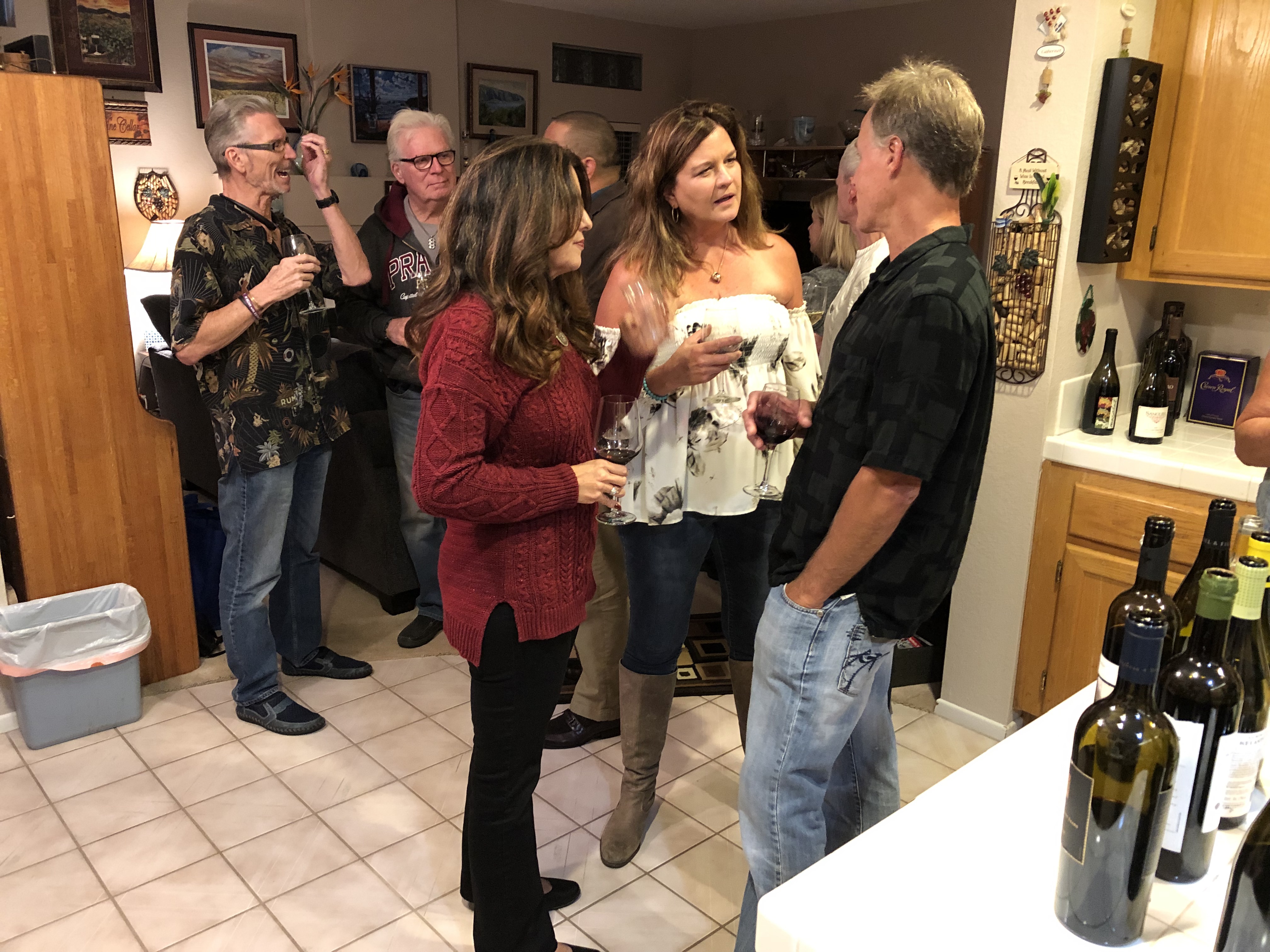 Whenever we do a wine tasting at Jan’s home, there’s a pretty good crowd. A recent November evening proved no exception. Approximately 20 people sat across from each other at a long table. A very long table. Each group had six wines to taste. Just to keep things interesting, I’ll start with table two.

As you know, I love to start or end a tasting with sparkling wine and on this night I chose Carpené Malvoti Rosé Spumanté Blanc from Italy. Tony found it very refreshing. Kim called it “fresh and bright, floral and fruity”, but said it was a bit one-dimensional. Brian enjoyed the “lovely fizz.” At $18, it scored about three and a half out of a possible five stars.

We stayed in Italy for the second wine, the Citra 2017 Trebbiano d’Abruzzo. Eric didn’t hold back calling it unexpressive, flaccid and uneventful. Kim said it was almost like drinking water. Brian said it was “almost redeemed by its dryness, but not quite.” At $10, it scored two stars.

Our first red was the Santa Julia 2017 Argentinian Malbec. Kim thought it had a beautiful color and found notes of dry and dusty berries. Eric called it a rich Malbec with an expressive nose. Tony said it was a great value with great taste. It averaged nearly three stars and sells for $12. We moved on to the 7 Moons 2017 California red blend. Said Brian “it is dark and there’s mint in there that lifts it and freshens it.” Eric called it dark and inky. “This is wonderful! What a nose.” Tony, however thought it had too much fruit. At $13, it scored just over three stars.

Dan Odfjell is a Norwegian ship owner who fell in love with Chile in 1982 and became a winemaker. His 2017 Orzada is a blend of Cabernet Sauvignon and Carignan. Kim felt it needed some time, but Eric thought it was spicy and peppery and very nice. Tony enjoyed it, too. It garnered three and a half stars and it sells for $23.

We ended the tasting with cuttings, the 2015 Cabernet Sauvignon from The Prisoner wine company. Made with 80% Cabernet and a blend of Petite Sirah, Syrah and Zinfandel, Eric felt it was a little light, but he enjoyed it, noting hints of mint and black licorice. Tony liked the full body and great flavor. Brian called it delectable and commented “boot polish, leather soles and tobacco.”At $48, it got the highest score of the night, about four and a quarter stars.

I’ll fill you in on what table one tasted soon.