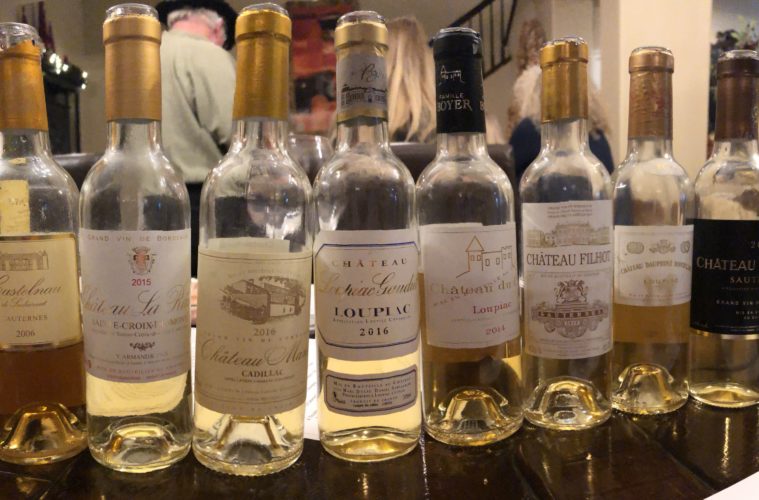 I was asked recently if I’d like to try pairing sweet Sauternes with savory and spicy foods. I jumped at the chance. With a group of fellow writers, we tasted eight different Sauternes and paired them with various foods. We mixed and matched the wines with spicy beef jerky, Sriracha cashews, spicy Calabrese, beet and sweet potato chips and more. It was truly a revelation. It’s easy to see what Sauternes are also referred to as Golden Bordeaux.

Sauternes comes from the Bordeaux region of France and is a white wine made with grapes infected with botrytis, also called noble rot. The result is a sweet wine that is elegant in the mouth, extremely food friendly and lasts literally for months after opening. The most famous is of course from Château d’Yquem, which can cost into the thousands of dollars per bottle. The ones we tasted were quite reasonable, each 375 ml bottle was well under $50, most in fact between $20 and $30.

After the tasting, which included wines from Loupiac, Cadillac and Sauternes, I put the wines in the fridge and pulled them out more than a month later to share at a Bordeaux tasting. The wines tasted every bit as good as they did the day I opened them. If you’re not able to finish a bottle in one evening, no sweat. They’ll hold for several months refrigerated. The wines we tasted were