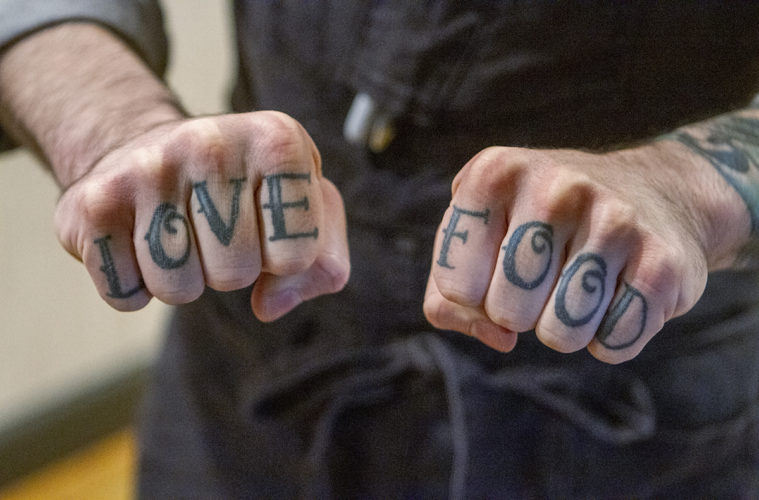 Along The Path To Journeyman’s Food + Drink Chef Zach Geerson didn’t exactly grow up on gourmet fare. He remembers his dad and uncle cooking steaks until they had a consistency of leather. He first restaurant job was as a dishwasher at Cru in Ft. Myers, Florida. One evening the chef there asked him how he liked his steak cooked. Zach didn’t have an answer as the only way he’d had it before was cooked into submission. The chef grilled the steak without any seasonings, took it off the fire and let it rest. He then sprinkled some fleur de sel on it and handed it to Zach. It was a life changing moment for him. Fast forward a few years and Zach was approached by a man he had previously cooked for. The man told him he needed a food and beverage manager and chef for the Hotel Fullerton. He wanted to open a restaurant and didn’t care what type. He could start with a clean slate and do whatever he wanted. Geerson thought to himself ‘everyone says that.’ It sounded too good to be true. A month later after sleeping on it, talking with his wife and friends, he asked his dad’s advice. Dad told him it sounded like he had already made up his mind. He took the job, was named food and beverage director and chef and set out to open Journeyman’s Food + Drink. Journeyman’s is open five nights a week. Zach also handles all the food for Hotel Fullerton – room service, catering, events, you name it. When I visited on a recent Wednesday evening, Rick Reich, formerly of Brix at the Shore, welcomed us with Cava while Chef Zach brought out an amuse bouche of compressed mango with yuzu zest, finger limes, Togorashi and Szechuan peppers. For my first course of the four course prix-fixe I selected Quinault River salmon crudo. Quinault is the name of a tribe in Washington that runs about 208,000 acres. They are self-governing and if you want to fish there you must be accompanied by a tribal member. It’s no more than 48 hours from the time the fish is caught until it reaches his kitchen. A dense color, he slices it thinly, puts a little salt on it, then takes spruce tips from a nearby region, pickles and dehydrates them and sprinkles it over the salmon. He then sprays vinegar infused with spruce tips on it, adds a little olive oil on it and places it on a horseradish custard with pickled dill seeds, fresh dill, a little thyme and herb oil and adds a touch of dill vinaigrette. The flavors exploded in my mouth and Rick’s selection of Sokol Blosser Pinot Noir rosé paired perfectly. While one of my companions enjoyed Rabbit with Things It Might Eat, the rest of us had Reister Farms lamb from Washington State. The lambs are selected by maternal health, whose young ones tend to grow up stronger and faster. They’re fed a diet of non-GMO organic peas which makes them more tender and flavorful. The herb-crusted chop was served atop a bed of Yukon potato purée with Yukon chips and pickled purple heirloom artichokes. I ordered Guinea fowl for my third course. Two of my dinner mates had steamed rock fish, while the other enjoyed venison. The Guinea fowl a cast iron roasted confited leg served with Chanterelle and black trumpet mushrooms and cocoa. The tagliatelle was cooked in a broth made from Guinea fowl bones as well as bones from the rock fish and branzino. They were smoked, then cooked down and married together for a “surf ‘n turf” style jus. It was seasoned with Zach’s house-made Karasumi, made from Mahi Mahi roe cured for four days, then marinated in 10 year aged Whistle Pig whiskey, then smoked and hung to dry for over a month. He grated it like Parmesan over the pasta and says it’s like “sitting on a beautiful coastline eating a plateful of bacon.” Rick’s pairing of Guigel Côtes du Rhone was magical. Even the best of evenings eventually must end. For the fourth course two of us chose the brown butter panna cotta, while another ordered a white chocolate and red beet dessert and the other went with dark chocolate and pistachios. The pane cotta was made with a brown butter pound cake and brown butter granola with a caramel sauce from caramelized poached apples with compôte on the side and a sliced chestnut purée with a coffee gel and organic, biodynamic Mountain Rose apples. Rick selected a Sauternes to go with it and once again he struck gold. Zach and Rick created an evening for us we won’t soon forget. 27-year-old Zach Geerson has evolved from a dancer and street artist who found work in a restaurant because he was looking for a job into a highly creative Executive Chef. His hands bear tattoos of “LOVE” and “FOOD”, which he considers to be the two main forces in the world. For an extraordinary evening, pay a visit to Journeyman’s Food + Drink in the Hotel Fullerton. Call 714 635-9000.