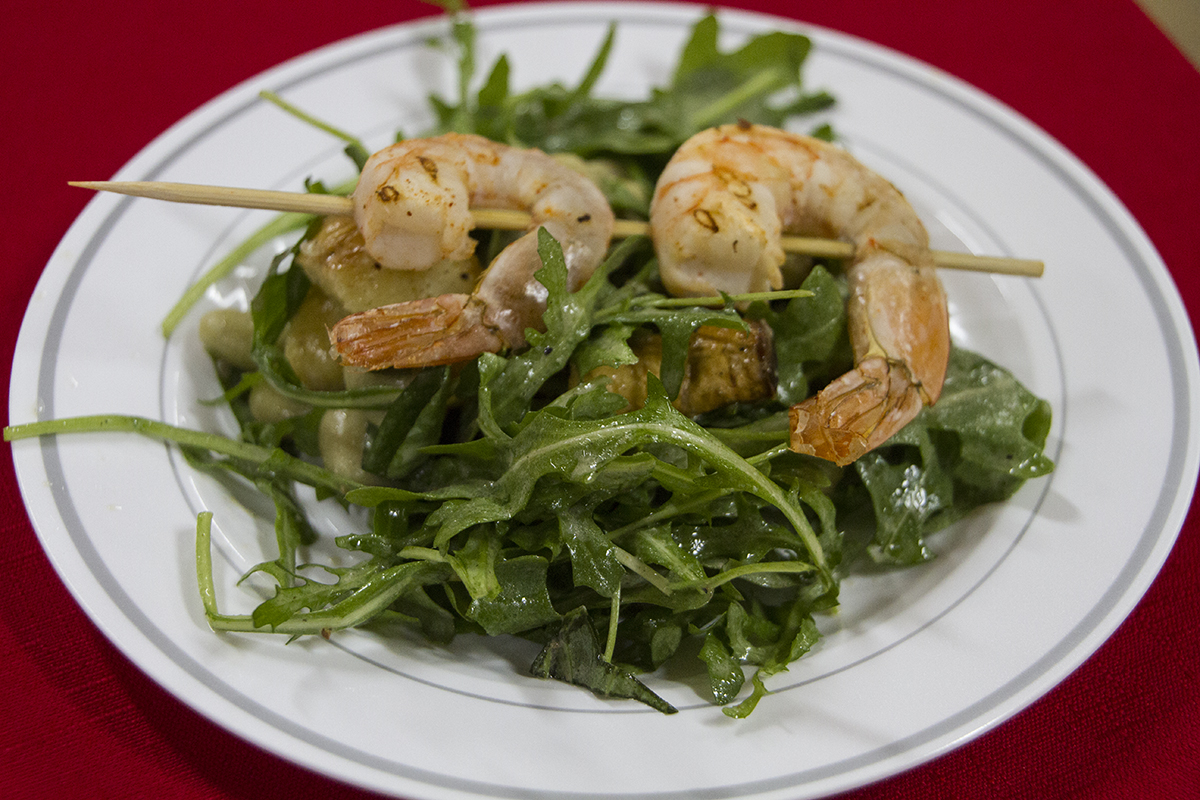 You may not know it, but you’ve seen produce from Melissa’s and chances are excellent you’ve eaten it. Melissa’s Produce sets the standard and has been doing so for a long time. In this my second visit to Melissa’s this year, we celebrated spring with a tasty and informative get together.

Robert Scheuller is Melissa’s amazing head of public relations and if there’s anything he doesn’t know about produce, you’d be hard pressed to tell. He started us off with a table full of different varieties of kale; Tuscan kale (also known as black kale), kale sprouts, flowering kale and kale sprouts. Chef Tom Fraker prepared kale chips using three different varieties and it was easy to spot the subtle differences. Simple to prepare, you just run a knife down the stem, toss them in a bit of olive oil and sprinkle on salt and pepper and bake at 425 for five or six minutes and you’re done. We also tasted the kale raw and it was quite tasty. Flowering and Tuscan kale are the most tender and are the common most in salads. Kale sprouts is the newest variety. We moved onto beets. Most people are passionate about beets, Robert told us. They either love them or hate them. I must confess I fall into the latter group. There are six major varieties of beets and in the spring the leafy greens are edible and quite tasty. The majority of people don’t know that and simply toss them out. Chef Tom showed us how to prepare beets for roasting using a candy cane beet. You put them in foil and roast them at 400, adding a little water if they begin to dry out. Leave the skin on and will rub right off when done. He prepared a roasted beet “bruschetta” for us, a gold beet topped with avocado, sautéed leeks and kumquats garnished with mint. Melissa’s considers themselves pioneers of making produce easy. They have packaged steamed baby beets as well as fava beans and artichoke hearts. All you need to do is heat and serve.

Moving on to leeks, they’re a staple in European cooking, but not used as widely here. Most folks simply don’t know how to tackle them. The dark green part is inedible, so get rid of it. Cut off the root, chop the leek and then wash it thoroughly to get rid of any dirt or silt. Belgian style leeks have double the amount of edible parts and will eventually become the standard in the U.S. The best ideas said Robert always come from chefs. Fava beans were next, and again, most people don’t know what to do with them. It’s really pretty simple as Chef Tom showed us. Remove them from the pod, sauté or steam them and most importantly, remove the membrane. If you don’t you’ll be stuck with a chewy mess. Formerly know as broad beans, most come from Mexico and are a springtime staple. They reach full maturity at six inches long, but they’re ready at one to two inches. We enjoyed a baby parsnip salad with grilled shrimp, steamed fava beans and arugula with a fresh basil and Italian vinaigrette dressing. Did you know 99% of all artichokes in the U.S. are grown in California? I didn’t either. It turns out artichokes are a member of the thistle family. They’re a flower and not actually a vegetable. New to the market from Melissa’s is the “microwavable artichoke” courtesy of Melissa’s. Wrapped in plastic with a pop-up timer in the bottom, stick it in the microwave for three to six minutes and when the button pops out, it’s done. I tried one at home and it was moist, tasty and cooked to perfection. Baby artichokes are completely edible with no choke to worry about. Steam, braise or saute them. We enjoyed a French country-style beet and steamed artichoke salad with Roquefort dressing.

Parsnips are also known as white carrots and the baby parsnips are sweeter and more tender than carrots. Try roasting them. Ojai pixie tangerines have just begun to gain notoriety. Melissa’s discovered them about 15 years ago when a gentleman named Jim Churchill loaded his pickup truck with them and drove to Melissa’s. That’s not the normal way to present produce, but those who were there were impressed. A hybrid of Dancy and King mandarins, they’re seedless, easy to peel and very tasty. We enjoyed them atop strawberry-rhubarb muffins!

“Rhubarb is spring!” pronounced Robert. Rhubarb is a vegetable whose leaves are toxic. That’s why they’re cut off when you see them in the produce section. They need a lot of sugar to offset the intrinsic bitterness. Strawberries usually come to mind when you think of rhubarb, but they’re also quite good with blueberries, blackberries and tangerines in a pie or cobbler. If you want to try something easy, just chop it up, throw it in a hot pan and watch it melt. Just add sugar and you’ve got a rhubarb spread you can put on ice cream or toast.

Check out Melissa’s website for all sorts of tasty recipes and tips.