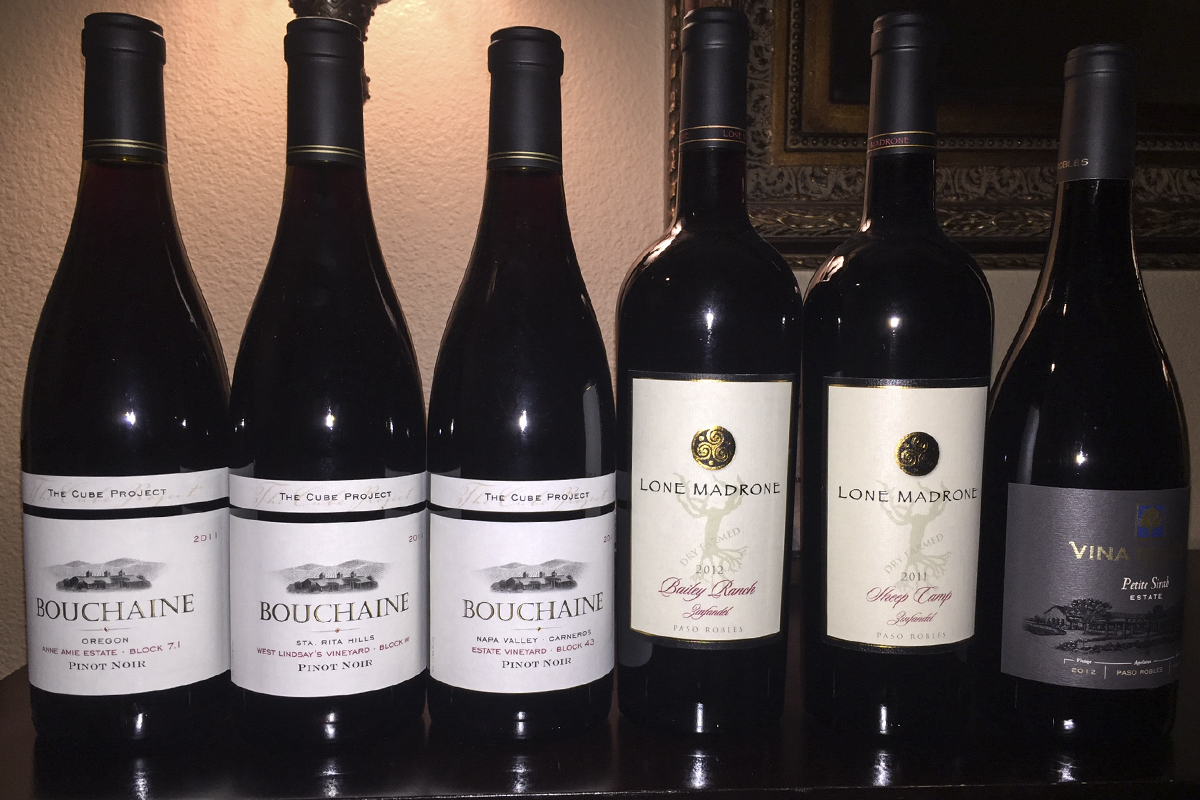 When I visited Bouchaine Winery last year in Carneros, I was asked if I was familiar with The Cube Project. I had to admit I wasn’t. In a nutshell, three winemakers from three different AVAs: Carneros. Oregon’s Willamette Valley and Santa Rita Hills shipped each other two tons of Pinot Noir grapes and crafted wines from them. We tasted the 2011 vintage made by Bouchaine’s winemaker Andrew Brooks. First we tasted the wine made with grapes from Anne Amie Vineyards in Oregon. Chris noted earth, perfume and cherries on the nose and dark berries on the palate. Amy and Brian both thought it was “lovely” with Brian calling it light, smooth and delicious. Ken said it was very subtle but distinct. With scores ranging from three to nearly five stars it averaged just under four stars. All three wines sell for $50.

The next Cube Project wine was made with fruit from Lincourt Winery in the Santa Rita Hills. Ken called it “bigger and bolder” with spice and ripe cherries. I picked up a lot of spice as well and found it quite complex. Chris noted raspberry and cherry, even acidity and a good tannic structure. It scored just under four stars.

The final leg of the triad was from Bouchaine in Carneros. Andrew Brooks was working with fruit he knew and it showed. Marty liked its great depth. I loved the aromatic nose and wonderful mouthfeel, Chris commented on the aromatic spices and noted it was concentrated and delicate at the same time. Amy said the flavor was “spectacular.” It scored better than four stars. If you get the chance to taste The Cube Project I encourage you to do so. I hope to taste the wines made by the two other winemakers.

We moved on to two Zinfandels from Lone Madrone in Paso Robles, starting with the 2012 “Baily Ranch” Zin. I found dark fruit on the nose with big, bold flavors on the palate leading to a long finish. Runar called it “pleasant and dreamy.” Chef Marty thought it was a good food pairing wine. Ken said it was “delightful and refined.” It sells for $38 and scored just over four stars.

The second Lone Madrone Zin was the 2011 “Sheep Camp” Zinfandel. Runar called the peppery nose addictive. Brian called it “jolly good!” Chris picked up a nose of red berries and spice, black pepper and notes of cedar. Ken felt it was just on the edge of being jammy. It scored close to four and a half stars and it sells for $45.

We ended the evening, accompanied by a six course pairing prepared by our host Jake, with Vina Robles 2012 Petite Sirah, also from Paso Robles. Brian said “I feel it must be good for you. Looks good, tastes good and by golly it does you good.” Runar loved the “dreamy, eye-closing nose.” It received three perfect five-star scores and it sells for $29.

Tom Plant launched WINEormous in 2009 and is a member of the International Food Wine and Travel Writers Association. Based in Temecula, California, he offers intimate winery tours for no more than seven people. Tour details and pricing are available at www.temecula-tours.com. Call now to book your Temecula Winery Tour at (951) 907-9701! Ask about special discounts. All wines tasted were provided at no charge.