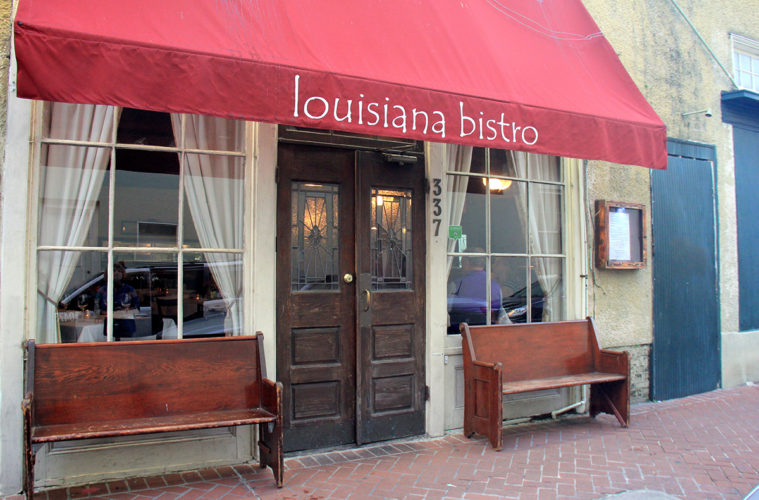 Louisiana Bistro: Taking “Feed Me” to a Whole New Level Mark Twain once said that “New Orleans food is as delicious as the less criminal forms of sin”.  There is no denying that at French Quarter’s Louisiana Bistro, their contemporary Creole cuisine is sinfully delicious. And this award-winning restaurant just happens to have an innovative on-the-fly Foodie’s Dream dinner called “Feed Me”. I am not kidding here!

Chef Brandon Green has been cooking since the age of eight. Brandon says while most kids his age were planted in front of the television watching cartoons, he and his grandmother were watching cooking shows. His favorite chefs were Julia Child, John Folse, Justin Wilson and none other than his idol, Paul Prudhomme, who propelled the distinctive cuisine of his native Louisiana into the international spotlight. Brandon had the pleasure of working with Prudhomme at his famous K Paul’s Restaurant in the French Quarter, as well as for other prestigious restaurants before coming to Louisiana Bistro five years ago.

It was his grandmother that taught Brandon the basics of Cajun and Creole cooking. He can still remember her sitting him up on the kitchen counter while she made a roux. And he was cooking before he could ride a bike. All of grandma’s dishes were prepared with love and enthusiasm and Brandon has carried this same passion with him throughout his culinary career. Per Brandon “ever since I can remember I’ve wanted to be a chef and to make people smile by cooking for them. There was never another option for me.” Raised on a farm in Marrero just outside of New Orleans, Brandon doesn’t remember the family going to the store much as they raised their own chickens and beef and used whatever was growing outside in the fields for their table. And that concept still stands today as the bistro still uses the most sustainable products available for their outstanding entrees.

Reservations are a necessity as the bistro has only twelve tables. But, this makes for an even more personal experience as the staff and chef charmingly interact with the patrons throughout the evening.

Individual entrees from the menu can be ordered, but, on this particular sultry September evening, we were there with one goal in mind – to take on what Brandon calls “the a’ la minute freestyle tasting” menu featuring the best Louisiana meats, fresh-caught local seafood and seasonal fruits and vegetables. It gives this talented chef the opportunity to showcase his latest innovations with seasonal offerings using the freshest ingredients. And as a special treat, he appears tableside to present his creations and briefly explain their composition and preparation. Patrons have a choice of three, four or five-course “Feed Me” dinners.

The wine list is not extensive, but, the choices are superb. Typically sold by the bottle, we were able to try a glass of the Marquis de la Tour, a brut sparkling wine from Loire Valley, France – perfect to whet the palate. Our first entrée was a fresh greens salad with strawberries, bacon, feta and candied pecans finished with a balsamic reduction, a perfect start to the evening. The French bread, delivered fresh and warm from the oven was accompanied with a sweet butter. Our second entrée, a Crispy Skinned Duck Breast served over a sweet potato hash and drizzled with a fig, balsamic vinegar and Irish whiskey glaze. This savory duck entrée’ equals the best we’ve had anywhere but the glaze on this duck was magnificent. Bouchard Bourgogne Rouge Pinot Noir from Burgundy, France was a great pairing with its fruit forward ripe cherry elegance and smooth finish.

If our taste buds weren’t tantalized enough, Brandon proudly arrived at our table with a tender Poached Grouper cooked to perfection with a fresh mixed vegetable accompaniment. The melt in your mouth fish was so flavorful, we commented on how something so simple could be so incredibly delectable. With a big smile, Brandon replied “See here’s the thing. When something is so good, you don’t need to mess with it and change it. Let it speak for itself”. Sonoma Cutrer Chardonnay from California’s Russian River Valley was the perfect choice with its fruity lushness and hint of minerality. With tummies so full we were sure we couldn’t manage another bite, Brandon insisted we try Louisiana Bistro’s desserts. My friend loves Crème Brulée, so she couldn’t resist, and she was delighted with her selection. A good Crème Brulée has that perfectly crisped topping and this one sure did. As for me, I could not pass up the Bistro’s signature dessert-Creole Ice Cream with chunks of cream cheese inside and topped with the chef’s own balsamic reduction and fresh berries. I’ve never tasted anything like it-ever.

Anyone who visits New Orleans knows that food is virtually a religion here. The food in the Big Easy isn’t just good – it’s the offerings of a world-renowned foodie lover’s paradise. But what makes Louisiana Bistro so darn good is its soulful, simple but elegant approach to Louisiana food. There are no salt and pepper shakers on the table because you don’t need them. This creative chef definitely followed his calling. His grandmother was right.

The restaurant is tastefully casual with a distinct laid-back atmosphere. At Louisiana Bistro it’s all about the incredible food and the outstanding service. And everyone here seemed to be talking about their food. I don’t think it could be said better than the comments of the patrons seated around us. One gentleman proudly announced he had been there twice that week. Another exclaimed he and his wife couldn’t get in the last time they were in New Orleans and “by God, we weren’t missing it this time. This place is phenomenal”. We couldn’t agree more!