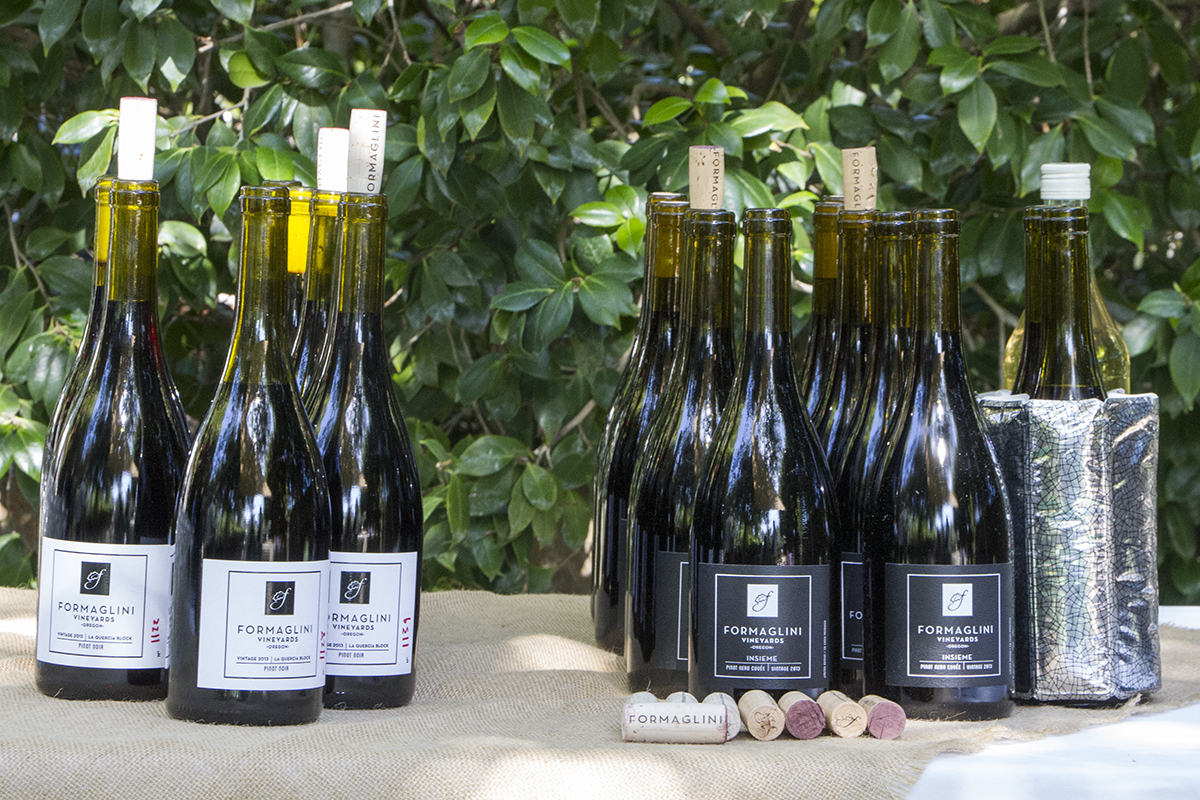 Formaglini – Wine From The Heart When I met David de Lancelotti at his lovely home in Santa Ana, he had just returned the night before from a visit to Europe. He treated us to cheese from France and wine from Italy while telling us the story of his passion project, Formaglini Vineyards. He describes the venture as a project to connect four or five generations together and “to give my family a sense of where they came from and what we’re about.” Family is indeed a key element. He dedicates his wines to his father’s mother whose maiden name was Formaglini. His La Quercia vineyard pays homage to the small village  just outside Bologna, Italy where his grandmother spent time. He’s proud that his young sons know how to pour wine properly. He still has a day job in telecommunications and spends about seven out of eight weeks on the road. He visits Italy two to three times a year. David claims his epiphany came on his first trip to Italy with his dad in the 90s. He says he didn’t know much about wine at the time, and in the midst of getting lost returning to Montalcino to retrieve a lost passport, he first tasted Brunello. “That” he says, “was it for me.” He brought home with him Italian culture and a connection with family. He also realized he wanted to do something with wine. In 2005, he found an abandoned Christmas tree farm in the middle of one of Oregon’s best vineyards. He purchased the obscure and neglected five acre parcel and as he says, “un neglected it.” In 2007 he planted four clones of Pinot Noir and some Lagrein, a rare Italian grape variety, and he waited. He let the vineyard tell him when the grapes were ready to produce wine and in 2012 he produced his first vintage of Pinot Noir. He harvested about two and a half tons and calls it a stellar vintage. He’s a firm believe in biodynamics and practices the techniques religiously. As far as he’s concerned, it’s the best way to grow the fruit, “not some crazy scheme or hippy trend. It’s the way people have grown things since the dawn of time.” He also believes wine is made in the vineyard. “If the fruit is ripe and correct and good, it makes it simply a stylistic process to make the wine.” He has a vineyard manager he works hand in hand with, and they spend winters getting the soil right, planting rye and then amending it into the earth. He has a winemaker, but make no mistake, the wines are made to his fastidious standards and philosophies and he works with a team that supports him. “Do the best you can everyday” he says. He calls himself a wine grower. He visits the vineyard at least once a month.

He’s so keen on producing only the finest that he dumped two of ten barrels from the 2014 vintage because they didn’t meet his strict standards. When asked if he wanted to sell the juice to someone else, he insisted it simply be dumped out.  He’s proud of the 2014 vintage and calls it clean with fruit shining through it. The wine will be bottled in June and released between mid-September and early October. He also produces a blend called Insieme, Italian for together. He says it’s the only Pinot Noir/Lagrein blend he’s aware of. Each vintage he releases sees more neutral wood. Each bottle is numbered by hand. His wines are available at Wine Exchange and at small artisanal restaurants that are wine-driven and that share his philosophies. On a beautiful spring afternoon, we tasted David’s exquisite Formaglini wines and enjoyed Porchetta sandwiches lovingly made by his wife Anya. His brother Bobby described the work he is doing with Lifewater, a project dedicated to teaching people in developing countries how to ensure their drinking water is free from disease. The Formaglini story is a heartwarming one. His wines truly need to be savored. He has four acres of Pinot Noir planted as well as two-thirds of an acre of Chardonnay and a third of an acre of Lagrein. I can’t wait to taste his Chardonnay.