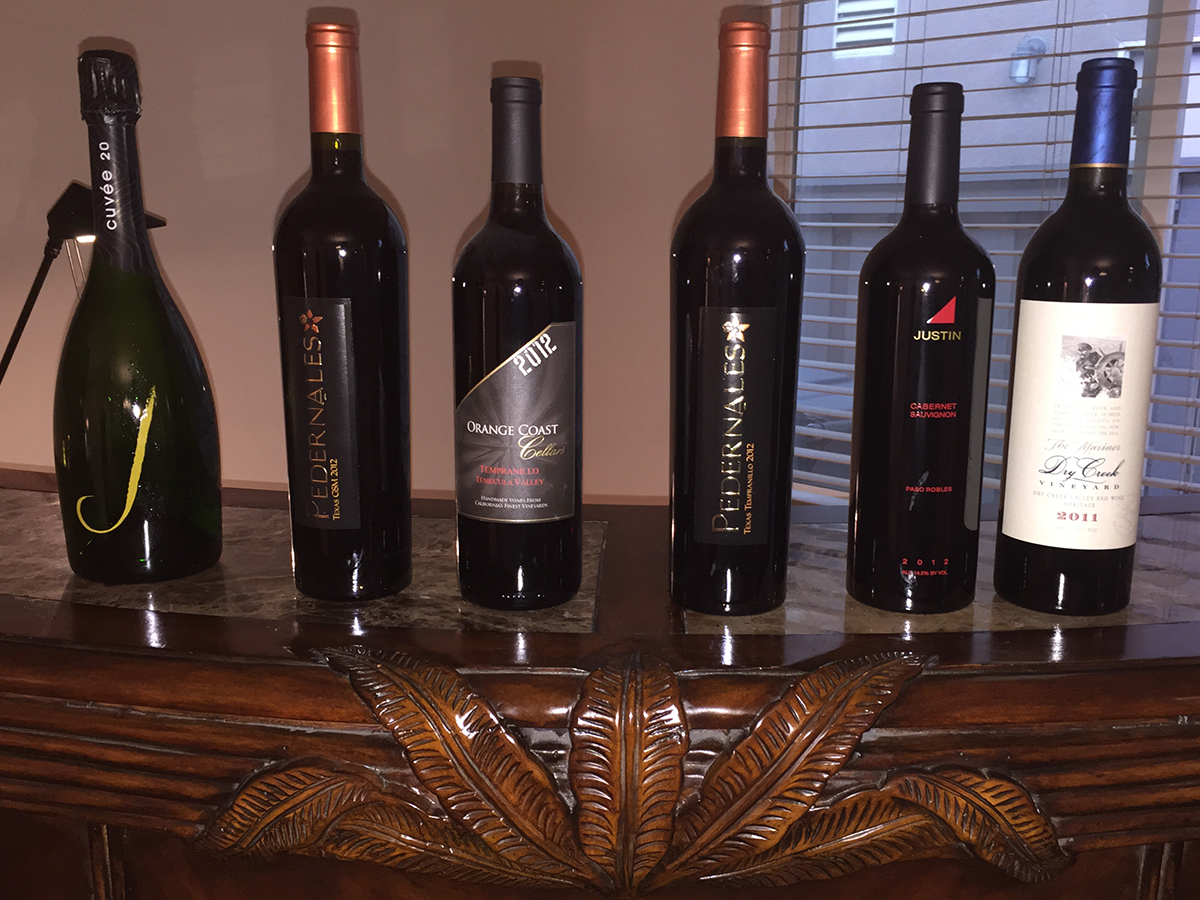 On this first of two nights we started with a Moldovan wine, the 2011 Asconi Chardonnay. Jean thought it paired well with white cheese and was a good hot weather wine. Chris enjoyed its balance and mouth feel, picking up apples and pears. Brian thought it was “okay for $13.” He got more mineral than fruit. Jake thought it was light and delicate.

On my recent visit to Texas Hill Country one of the stops was at Pedernales Cellars. They were kind enough to ship some wines for our group to check out and we started with the 2013 Texas Dry Rosé. Eyes always roll when I mention Texas wines and then they taste them. I was impressed with the gorgeous pink color and clarity. It’s a bone dry wine with a long finish. Brian loved the bouquet, found it dry and very pleasant and thought it was a great $20 wine. Jan said it was very complex for a rosé and liked it quite a bit. Jake enjoyed the rich flavors. It averaged nearly four out of five stars. Score? Texas 1, skeptics 0.

From Escondido we tasted Orfila‘s 2012 Pinot Noir. Chris picked up cranberry, cherry, clove and vanilla with notes of tobacco and liked its tart finish. Jean called it a very big Pinot. Jan said it was “surprisingly nice! Fruit forward with black pepper on the nose.” A taster who didn’t write their name on their sheet said it was deep and sexy. Priced at $40, it received a solid four stars.

We tasted another Moldovan wine next, non-vintage Golden Land Feteasca Neagra. We all commented on its dark, inky color. Jan called it a CSB (can’t see bottom) wine with lots of prune. Brian found licorice and chocolate and thought at $11 it was a tremendous value. Our anonymous taster called it a “dark and stormy Transylvanian treasure.”

We tasted the 2012 Domaine Barossa Black Tongue Shiraz from Australia. Jake liked its classic Rhône style and full mouthfeel. Chris detected aromas of cut grass, celery and leather with a palate of spicy extracted fruit. Brain called it a “typical Aussie Shiraz.” I enjoyed the fruit forward character. It appears sold out but was available for $17.

Our group loves wines from Dry Creek Vineyard and the 2011 DCV Cabernet Sauvignon was a crowd pleaser. I called it a classic Sonoma Cab. Jake liked its well-integrated tannins. Chris gave it a perfect five-star rating and called it plush and velvety with complex dark fruit of plums and chocolate covered cherries. It sells for $25.

A week later we met at Debi and Chris’ house to taste more wine and enjoy exceptional food. Kim brought not one but two pans of homemade lasagna and Chris made out of this world pulled pork sliders. We began with a Sonoma County sparkler, “J” Cuvée Brut. I love beginning a tasting with sparkling wine and this one was wonderful. Al called it clean and crisp and enjoyed the apple notes and long finish. Brian thought it was refreshing but a bit pricey at $28. Jan simply said it was delicious.

We tried a couple more wines from Pedernales Cellars. First up was the 2012 Texas GSM. Ken liked the berry and butterscotch on the nose and bit of chocolate on the palate. “Very smooth and polished” he thought. Brian described it as old world meets new world and called it a great wine for the $28 price. Chris liked the smooth, lingering finish.

We sampled the 2012 Orange Coast Winery Tempranillo. Ken awarded it 4.25 stars and liked its earthiness and balance. Chris found it lively and bright with bright cherry and spice on the nose. I enjoyed the color and nose and thought it was a good value for $35.

We tasted another Tempranillo, the 2012 Texas Tempranillo from Pedernales. I loved the nose and almost couldn’t stop smelling it. This is an elegant, well-balanced wine. Ken called it “yummy” and gave it four and a half stars. Brain said it was great; subtle and refined with some backbone to it. Jan loved the nose. It’s priced at $20. (Editor’s note. I initially listed the price as $49, which is the price for their reserve Tempranillo. Tony said before he saw the incorrect $49 price that it tasted like a $50 wine)

In visiting Paso Robles this spring, I stopped at Justin Winery and tasted their 2012 Cabernet Sauvignon. I shared it on this evening with our group. Jan thought it needed some time to open up, but that it smoothed out nicely. Chris picked up ripe black currant with black and red cherry and loved the long clean finish. Al thought it was a wonderful value at $25. It averaged three and a half out of five stars.

We wrapped things up with the 2011 “The Mariner” Meritage from Dry Creek Vineyard. The color is magnificent. It’s a big, complex wine with a long finish. Chris gave it a perfect five-star score and found it sleek, tight and focused. Ken liked the wonderful nose and nice complexity. Brian also gave it five stars and described it as “kind of what you get when the stone is left when you eat a plum.” It’s a $45 bottle.