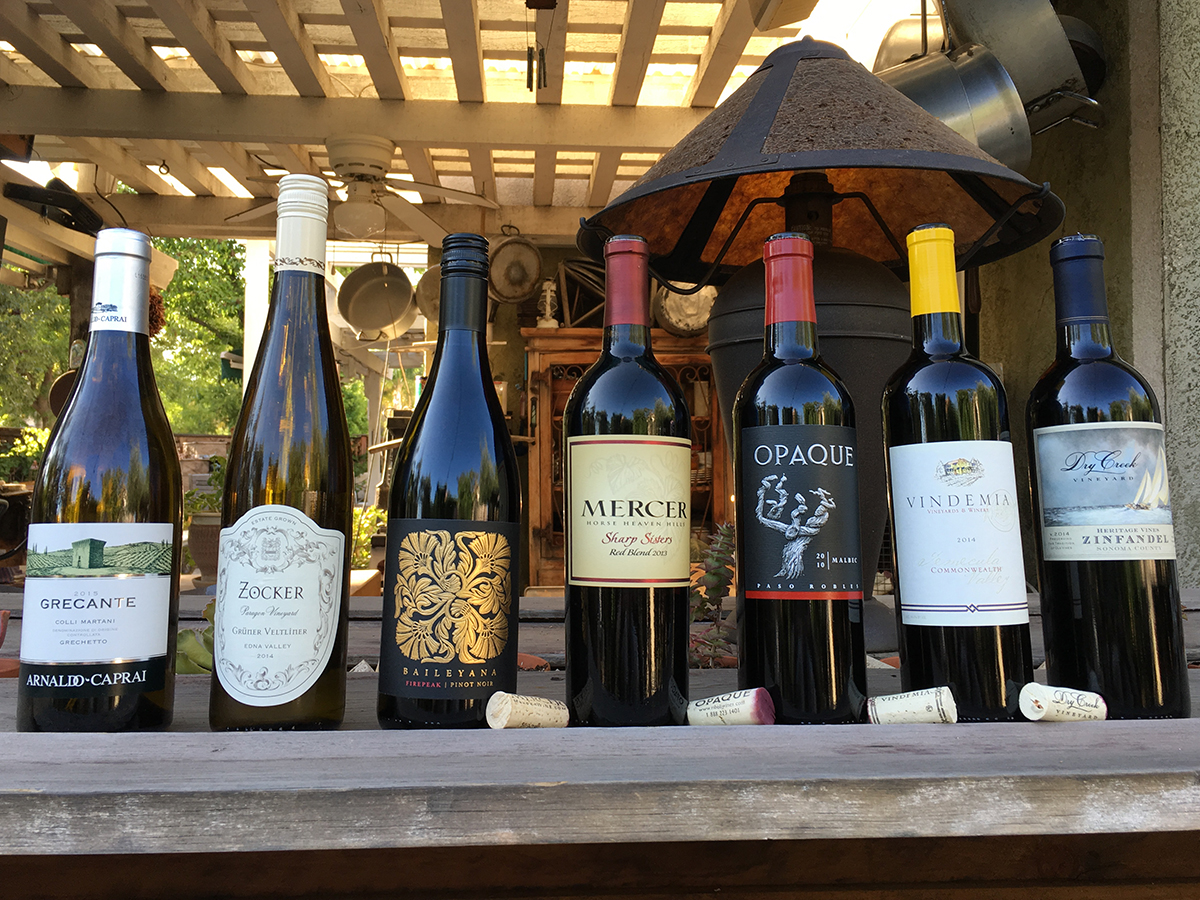 Back To The Wine Tasting Table When Chef Marty offered to fire up the pizza oven, I accepted on the spot and gathered the troops for another wine tasting. On a balmy late spring evening, I brought the wines and friends brought pizza toppings and we popped some corks. And opened a few screw caps, too.

Seven wines made the list, starting with the 2015 Arnaldo-Caprai Grecante. 100% Grechetto, this is a crisp white wine from Umbria, Italy. I was lucky enough a few years back to visit the winery and spend time with Marco Caprai. Al loved the nose and color and called it very elegant. Susan enjoyed it’s long, fruity finish and found it bright on the palate. Ken picked up pear and light citrus on the nose and liked the balance. I loved the nose and thought the acid made it a perfect pizza pairing! It averaged four out of five stars and is a bargain at $20. Look for it!

We tasted a wine made from a grape most of the group had never heard of – Grüner Veltliner. I liked the pineapple nose and bright acidity. Pat said it had good mouth feel and bright flavor. Brian remarked “on the nose it’s all summer apple orchards.” Kim called it an unusual wine. Ken thought it was well-balanced with a mild sweetness. At $22, it scored just under four stars. Baileyana’s 2014 Edna Valley Pinot Noir was next. Al called it a classic California Pinot and said it tasted like twice the $20 price. Ken said it screamed big cherry and was smooth on the palate. Kim said she could drink it every day. It scored better than four stars.

We hadn’t tasted a Washington state wine in a long time, so it was a pleasure to try the Mercer 2013 Sharp Sisters red blend of Merlot, Syrah and “other.” Brian noted licorice and dark chocolate with a cedar aftertaste. I wasn’t wild about the nose, but I thought it drank well. Al called it very drinkable and balanced. it scored a perfect five-star rating from Tony and it sells for $26.

From Paso Robles we tried the 2010 Opaque Malbec from Riboli Wines. Kim called it a beautiful wine and said it was “definitely Paso.” Brian called it dark and voluptuous, “Jane Russell in a wine glass.” Ken said it was “wonderful right down the throat.” At $30, it scored an average of four and a half stars.

I had run into Dave Bradley a few weeks back. He’s the owner/winemaker at Vindemia in Temecula. He offered a bottle of his 2014 Commonwealth Bordeaux blend for us to taste. The $88 price tag raised more than a few eyebrows. Kim said it wasn’t ready to drink yet. Brian called it “brambly, and there is some terroir here.” Al called it a lovely blend, but pricey. I feel aging it will reward you handsomely. Because of its youth and price, it scored a little over three and a half stars. We ended our get together with Dry Creek Vineyards 2014 Heritage Vines  Zinfandel. Ken said “Dry Creek never disappoints. Smooth, balanced and will only get better.” Brian called it “an American breakfast in a bottle.” Susan said the nose reminded her of a nice campfire. At $24, it scored four and a half stars.