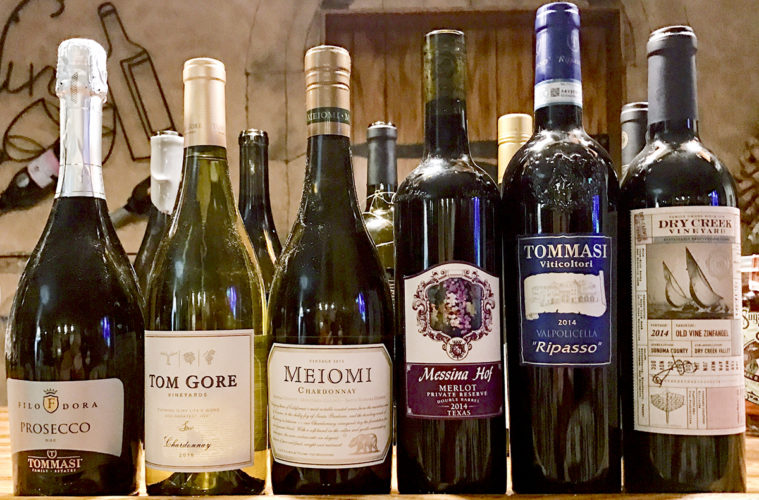 Wine Tasting Again? But Of Course!

Our most recent gathering was at Jim and Judi’s Murrieta home. They own and operate Roadrunner Ridge Winery in Rainbow and are avid wine lovers with a 3000 bottle cellar. There’s always good food and companionship when we gather there. Six wines were waiting for us, so we began. First we tasted Tommasi Prosecco Tenuta Filadora from Italy. Produced 100% from the Ghlera grape, the delightful sparkler hails from the small town of Miane, in the heart of the Prosecco region. The Tommasi family has been making Prosecco for 20 years now. I loved the yeasty nose, reminiscent of freshly baked bread and its elegant effervescence. Ken enjoyed lemon and peach on the nose and found it smooth and well-balanced. Brian called it light, refreshing and pleasantly bubbly. It sells for $16 and averaged four stars from the group.

Our second wine was the first of two Chardonnays, Tom Gore Vineyards’ 2015 vintage from California’s north and central coast. This wine was aged 60% in oak barrel and 40% in stainless steel. I found the nose to be quite soft and the wine light on the palate. What surprised me was how well it paired with Italian salami! I wouldn’t expect that with a Chardonnay. A couple of tasters thought it was overly sweet. Ken called it lovely especially at $14. It scored just under three out of a possible five stars.

The second Chardonnay was the Meiomi 2015, sourced 44% from the Sonoma coast, 29% from Monterey County and 27% from Santa Barbara County. 100% stainless steel fermented, a taster who didn’t identify themself liked the notes of Meyer lemon. Kim enjoyed pineapple on the nose and its soft palate entry. Said Jim, “This I could drink and enjoy.” It scored just under four stars and it sells for $21.

In case you haven’t noticed, Texas wines have been racking up multiple awards and we tasted the 2014 Messina Hof Private Reserve Merlot. Barbara said “Tastes great! Love it!” Anonymous liked the mouthfeel and balance. Jim called it very food friendly. Kim called on her inner President Trump and called it “really, really, really good.” Brian said it was excellent and Ken called it wonderful. At $22 it scored better than four stars.

We returned to Italy for the 2013 Tommasi Ripasso, a blend of Corvina Veronese, Rondinella and Corvinone. After spending nine days in stainless steel, the juice is passed through warm Amarone grape skins. It’s aged in Slavonian oak for 18 months. I loved the nose and notes of plum and blackberry on the palate. Kim found it soft and smoky. Jim called it a good food wine. It scored around three and a half stars and it sells for $23.

Next and finally we tasted the 2014 Dry Creek Vineyard Old Vine Zinfandel from Sonoma. This $32 wine has a touch of Petite Sirah and a dash of Carignane and spends 16 moths in French, American and Hungarian oak. Ken gave it four and a half stars and called it very smooth and “only going to get better.” Brian said it was dark and dense and really meaty. “It’s not polite, but it’s wholesome.” Kim called it thick and yummy. Jim called it the best of the night. It scored better than four stars.