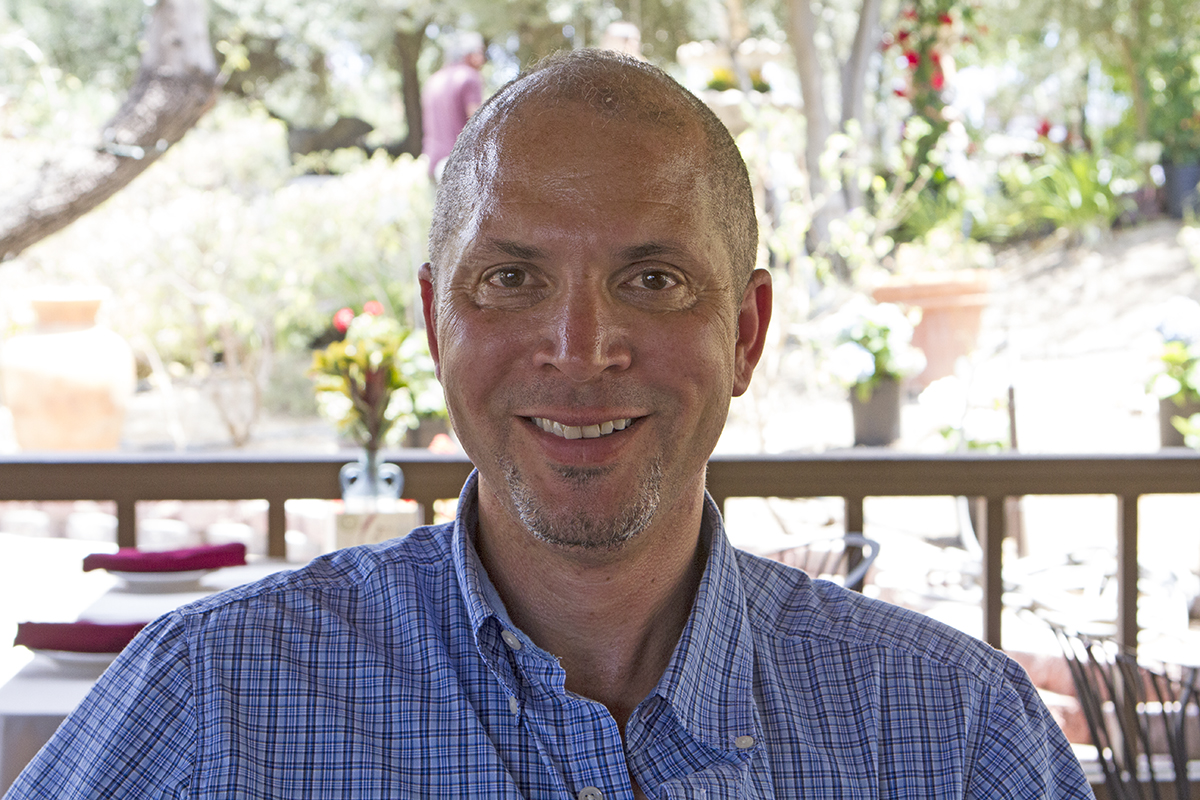 As I was preparing to head north to the Napa Valley for the Rutherford Dust Society’s 2010 Cabernet tasting, I had lunch with Mt. Palomar Winery‘s new winemaker, James Rutherford. The town of Rutherford got its name from James’ family as it turns out. Although he intended to settle near his family roots, he kept heading further south, with stops in Santa Barbara and the desert near Palm Springs before accepting his current position. James opened a bottle of his first release at Mt. Palomar, 2008 Kyanti, a Sangiovese/Cabernet blend that meets Chianti standards. Since this isn’t the Chianti region he can’t call it Chianti, hence the spelling. James arrived to a surplus of older wines still in barrel and he wanted to offer another take on Sangiovese. Not yet released, this wine is drinking beautifully.

We sat on the patio at Shorty’s Bistro and visited while we ate, sharing one of the tastiest crab cakes I have ever eaten. He took the position six months ago, filling the void left when Craig Boyd moved to South Dakota to become the winemaker at Prairie Berry. After 9/11, the wine industry took a hit and James left the industry and then started a new business. When his partner decided to retire, he decided it was time to re-enter the wine world. He pointed out the perils of winemaking, noting that he’s “always waiting for the other shoe to drop. You can plan until the cows come home”, but you get what you get. We touched on Temecula, about the impact Pierce’s Disease had on this valley, how the disease forced the growers’ hands. “It allowed us to get some different varieties better suited to the area.” When I asked him what he brings to the table, he replied that although continuity is important, he’s not afraid to break tradition when blending. He also tends to like the old methods. He plans on doing warmer fermentations on his reds and will be looking for more extraction which, he says, may be more of a challenge for “innocent palates.”  His wines will be made for the market, but at the same time to his palate. He believes there’s a place for sweet wines and rosés, as long as they’re done right. He wants his wines to be food friendly, easy to drink and not out of reach on the budget.

When Louis Darwish purchased the property his interest had been citrus and avocados, but in time he developed an appreciation for wine. Louis’ daughter Carol is the general manager and she is learning all she can about the craft of winemaking. Plans have been laid for a major expansion and have already been approved. They include a much larger winery and tasting room, an immense retail space, a chapel and 42 casitas. Groundbreaking is slated for early 2014. They will also be planting out the property with many more vines. He has a test planting of Mourvèdre, a grape he notes is difficult to grow. Mt. Palomar offers 25 wines currently. Rutherford plans on paring that number down a bit. He believes wines should be varietally true and as a fan of Rhône varietals, look for a larger focus there. There are 27 varieties planted on the estate, seven of them different Sangiovese clones, with that grape becoming a refocus for them. Mt. Palomar introduced the Sangiovese grape to Temecula.The Castelletto brand will carry on, and there will be more of a focus on Italian varietals. He will continue to produce Shorty’s White and Shorty’s Red and will strive for a consistency in style. I ordered a Caesar salad with grilled steak, ideal for a hot summer day, which I enjoyed while we continued to visit and drink Kyanti. His love of wine started early in life. He began his wine collection at eight or nine years old.  James attended Cal Poly, before they had an official wine program. He studied fruit science with an emphasis on viticulture. He interned at Meridian Winery in Paso Robles and then joined the Peace Corps before relocating to Santa Barbara County. He had been making wine on his own and realized it was something he could do. He grew up around the wine business and his family always had an appreciation for wine. The central coast, he says, was instrumental in his decision to become a winemaker. He looks forward to a long and happy career in Temecula. I’m optimistic he will see his wish granted.