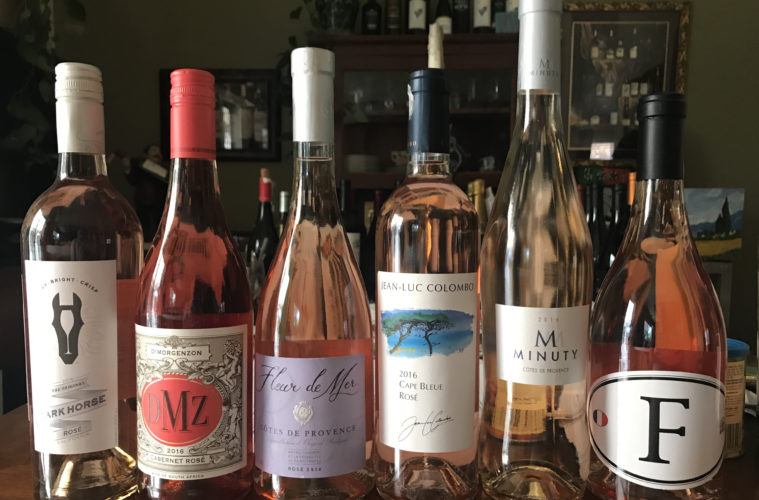 Here in Southern California, summer is around the corner and days are getting warmer. There are few wines more perfectly suited to summer days and evenings than rosé. We met again at Ken and Taryn’s home to taste six wines ideally suited for a warm evening.

The first wine was Dark Horse 2016 Rosé, a blend of Grenache, Barbera, Pinot Gris, Tempranillo, and other varieties from California. Alex was pleasantly surprised, calling it dry and tasty and saying “it’s nice to taste a rosé that’s different.” Al called the nose beautiful and enjoyed the dry finish. Kat called it a “great wine for $10.” It scored just under four out of five stars.

The next wine came from South Africa, Demorgenzon 2016 DMZ Cabernet Rosé. The vineyards are on the Western Cape. Brian called it pleasant with a “lovely fruit-skin bite combined with a perfumed nose.” Kat said it was very smooth. Alex called it good for the price at $12. Not everyone was a fan, many said it lacked a finish. It averaged about three stars.

The final four wines came from France, beginning with Fleur de Mer’s 2016 Côtes de Provence Rosé, a blend of Grenache, Cinsault, Syrah, Carignan and “other select reds.” Many tasters found it had a bitter aftertaste. Kim said it had “lots of peach, but not as refreshing as the first two.” Alex thought it tasted more like a white. Brian called it exceptional at the price. It also scored about three stars and sells for $17.

The fourth wine was a Syrah/Mourvedre blend, Jean-Luc Colombo‘s 2016 Cape Bleue Rosé from Provence. Al liked the flavor, but thought it was acidic. Esther found it refreshing. Others called it either metallic, bitter or acidic. At $10 it scored about two and a half stars.

With visions of Cabernet dancing in the group’s mind, we poured the next wine, M de Minuty 2016, also from Provence. A Grenache/Cinsault/Syrah blend, Alex thought it was “pretty good.” Brian called it “fairly awful.” Kat said she liked it. Again, many tasters found this wine acidic and bitter. At $15 it averaged two and a half stars.

We ended this unique tasting with a 100% Grenache rosé from Dave Phinney’s Locations series. The F5 drew mixed reactions including this from Al – “Love Dave Phinney wines, but not this one.” Alex thought it was the best of the night. Laura said it tasted like orange peel. It scored about three stars and you can find it for $19.

It seemed to be a case of rosé overload.. My advice, find a rosé you enjoy, and sip it while the weather is sultry.