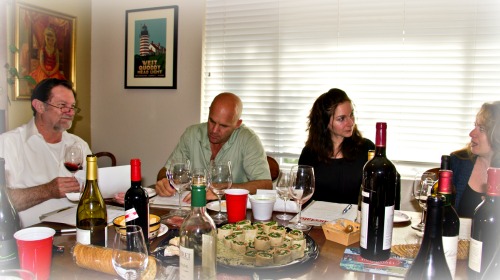 In April I attended a tasting of Chardonnays and Pinot Noirs from the Santa Lucia Highlands. I was thoroughly impressed by the magnificence of these wines and was fortunate enough to get a few bottles to share with some friends. We gathered at my house late in the afternoon with a lineup of six wines to taste.

To no one’s surprise we moved from whites to reds, starting with the 2011 Ehret Family Winery Sauvignon Blanc. Ken was impressed with its beautiful light color and great Sauvignon Blanc nose. He also enjoyed its acidity and minerality and thought it was a “fantastic value.” Another taster loved the creamy finish and found it amazing for the price: $16. This wine was a big hit with most of our tasters.

The next wine was the 2010 Lucia Vineyards Chardonnay which Ken called “shockingly good.” He noted pear and pineapple and its huge oak nose. An anonymous taster said it “can stand up to the best of Chardonnays. Spice up front turns into a flavorful, oaky, buttery flavor bomb.” Definitely one of the group’s favorites, it’s priced at $30 and I think it’s a great value.

Moving to reds we tasted Pedregal‘s 2008 Merlot from Salinas, one of two offering from Ray Franscioni Wines. Tony found it very smooth and great for an everyday wine. As to whether or not he would buy it for $26, his reply was “double yes!” Ken thought it presented plum, black cherry and black currant notes and felt it was well balanced with soft tannins. They group was split nearly down the middle as to whether or not they would buy it, with a slight edge to the yes side. The second Franscioni wine was a Pinot from the Santa Lucia Highlands: Puma Road’s 2010 offering. I liked the strawberries on the nose and found it well balanced with bright acidity. Another taster commented that it offered nice fruit up front that tapered off.  Tony thought it was “just ok.” Ken loved the varietal garnet color and found the wine “exceptional. He picked up dark cherry and stone fruit and when asked if he would pay $32 for it he answered “yes, yes, yes.”

We wrapped up our get together with two more wines from Lucia Vineyards. First was the 2010 Pinot Noir. Ken though the nose was exceptional and again picked up black cherry as well as plum. He thought it was well integrated with perfect acidity. Another member of our group thought it was well balanced, soft and flavorful with a touch of pepper. Two others also picked up the pepper. Most of the group wouldn’t hesitate to spend $39 on this wine.

Our final wine of the day was the Lucia Vineyards 2010 Pinot Noir from Gary’s Vineyard. What a great way to wrap up a tasting. Many of us would have been content to simply smell it, but all of us gave in and tasted it and we were glad we did. One taster who left their name off the sheet said ‘It tastes like more, as in I definitely want more.” They thought the nose was amazing and that it rivaled some well known Pinots from the Willamette Valley and the Santa Rita Hills. Tony said “yum yum yes!” Ken commented on its dark ruby Pinot color with lots of extraction. He called it a “full throttle Pinot” and said it was one of the best Pinots in California.” The group was unanimous in agreement that it was worth its $49 price. Thanks for joining us vicariously. We’ll meet again soon.