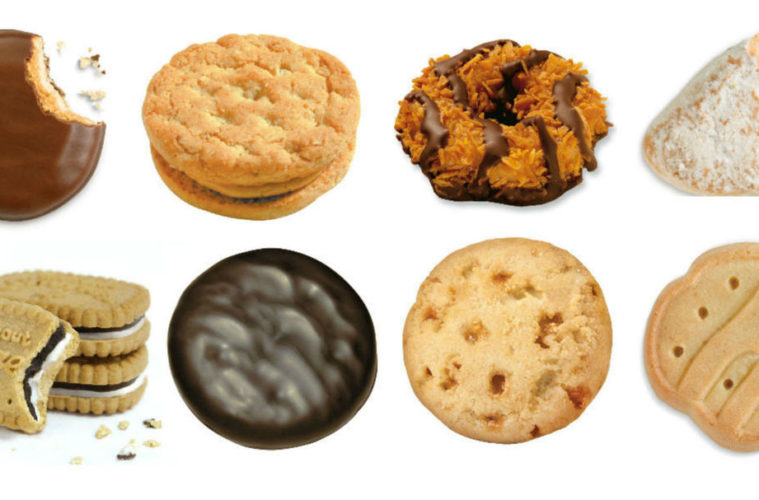 Wine Tasting From Argentina to Sonoma What to do the night before Valentines Day? Why, hold a wine tasting, of course, but let’s add a little twist. How about pairing wines with Girl Scout cookies? I have to thank Laura for that suggestion, who came laden down with boxes of nine different Girl Scout cookies.

Starting with our first wine the non-vintage Toso Brut from Argentina. Rose said it was smooth and light, not too bubbly. 100% Chardonnay, produced in Mendoza, Argentina, Kathy thought at $13, it was a great value. Nearly everyone felt the same. It scored better than four out of a possible five stars. GSCP (Girl Scout cookie pairing) – Savannah Smiles and Lemonades fared well.

Next was the 2015 Simonsig Kaapse Vonkel Brut Rosé. A blend of Pinot Noir, Pinotage and Pinot Meunier, this South African sparkling had a pinkish color and nice bubbles according to Kathy, but also a bitter edge. I thought it was an easy drinker but a bit over-priced at $25. Scott thought it was very good with lots of bubbles. It scored about three and a half stars. GSCP – Trefoils. Our final sparkling of the night was from South Australia, the 2016 Paringa Sparkling Shiraz. A brilliant ruby color, Linda liked its rich berry taste. Kathy noted a little sweetness on the finish. Laura said “wow!” and called it the best of the three. Wanda called it her kind of breakfast wine. Ken thought it would pair perfectly with turkey and cranberries. It scored just over four stars and it sells for $18. GSCP – Tagalongs and Samoas.

We tasted the 2016 7 Moons Red Blend from California’s Central Coast. Scott called it easy-drinking. Wanda loved the label and black cork. I enjoyed the cherry nose and thought it was nothing special, but it was $10. Laura called it a good blend of seven grapes, which are Syrah, Merlot, Petite Sirah, Zinfandel, Cabernet Sauvignon, Malbec and Grenache and. It scored about three and a half stars. GSCP – S’mores and Tagalongs

I’ve been a fan of Texas wines since I met Paul and Merrill Bonarrigo, owners of Messina Hof Winery in Bryan, Texas. Dave Phinney, of The Prisoner fame, launched his Locations Wines series a while ago. He visits different regions with the intention of breaking the rules. You wouldn’t expect Texas to produce a big, bold wine like this one, but Phinney did it. A blend of Grenache, Mourvèdre, Syrah, Carignan and a few Bordeaux varieties thrown in for good measure, Laura called it enjoyable. Linda and Rose thought it was smooth. I liked its long finish and the fact it was food friendly. Ken called it very drinkable. It scored four stars and sells for $25. – GSCP – Samoas and Trios We ended with the 2013 Meritage from Dry Creek Vineyard in Sonoma County. A blend of the five principal Bordeaux grapes, Laura said “fabulous nose, unbelievable price.”  It was Kathy’s favorite wine of the night. Linda said it was “dark, rich and delicious.” Ken called the nose luscious. Scott said “I would love to serve this in my restaurant.” At $26, a price our group thought was a steal, it scored better than four and a half stars. GSCP – Samoas and S’mores.