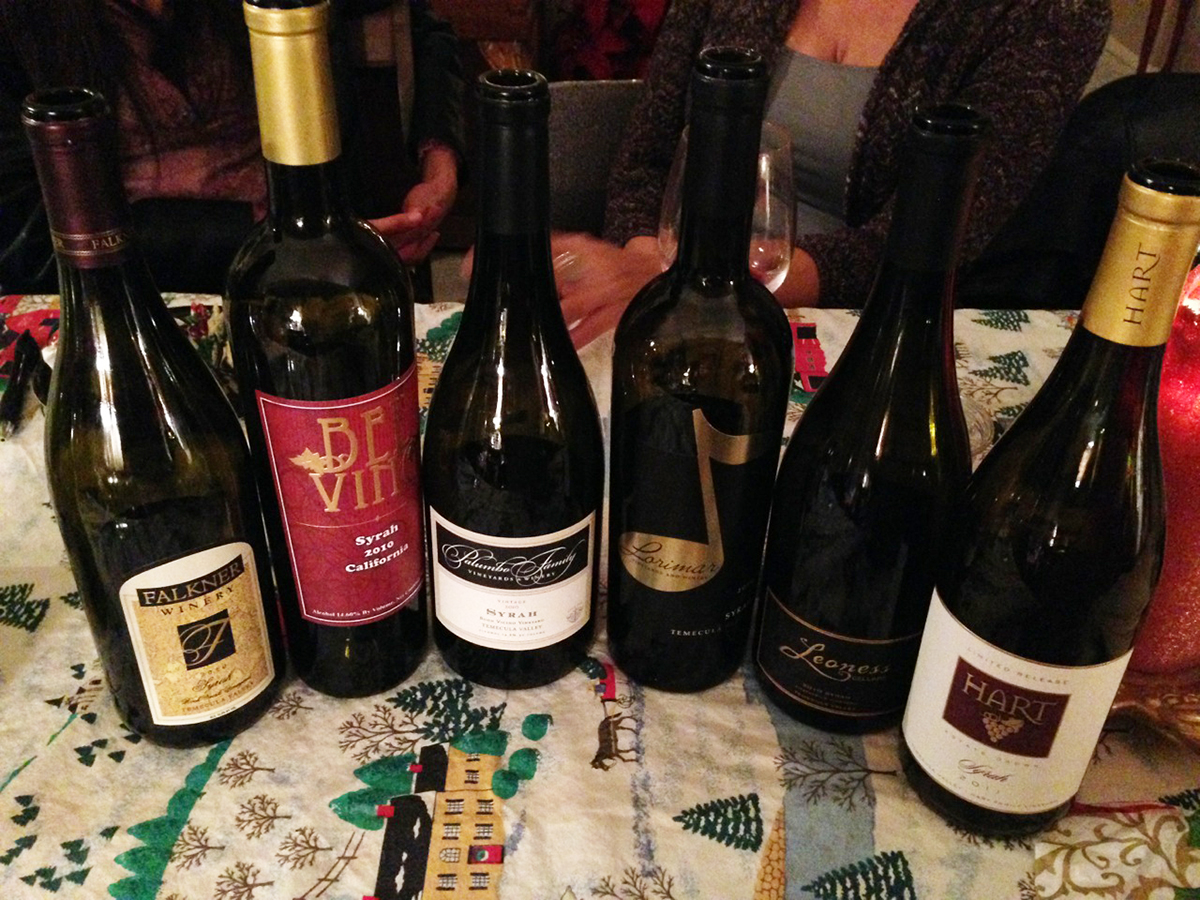 It was our biggest tasting ever. When word got out we were doing a blind tasting of Temecula Syrah, the line started forming. Around 25 people gathered, crowded around several tables at Jan’s house to see who would be crowned king of Temecula Syrahs. To be fair, not every Syrah was represented. A few wineries declined to take part. Ten wineries were up for battle and here’s what happened that evening. There was a clear winner and a clear loser.

All ten bottles were disguised in brown paper bags. Most tasters knew which wineries were represented, but didn’t know which wine was hiding beneath the plain brown wrapper. It was fun watching people say things like, “oh, this must be the…” And on to the results.

The wine that placed 10th out of 10 was an abject failure. This was a flawed wine, scoring 11.5 points out of a possible 60. Comments ranged from “Yuck! Toss it!” to “I get burning tyres. (Brian is British) And the mailman’s used rubber bands. Actually not nice.” The wine that received two zero out of five scores and a point five was the non vintage Inn at Churon Winery Syrah. If you’re curious, you can pick up a bottle for $28.99.

From here things improved vastly. Placing ninth less than one point behind the number eight finisher was Hart Winery’s 2011 Syrah with 28.75 points. Ken liked the dark berry nose and touch of caramel on the palate. Chris gave it three points and like the berry and cherry notes on the nose and its lingering finish. It sells for $30.

Just edging Hart for 8th place was the Falkner 2010 Syrah with a score of 29.5 points. Al thought the nose was “odd”, but he found it full-bodied with a nice finish. Rhonda thought it was smooth. It sells for $37.

In 7th place was Danza del Sol’s 2010 Syrah with a score of 32 points. Ken liked the berry and spice nose. Amy loved its mouth feel. Chris felt it was fruit forward and well-balanced with a smooth, clean finish. $33.

Our 6th place wine scoring 33.25 points was the 2010 Syrah from Europa Village. Carol felt it tasted almost like a Pinot Noir. Tony agreed and called it a nice wine. I liked the pepper notes and its mouth feel. $35.

In 5th place was the 2011 Leoness Cellars Fitzpatrick Vineyard Syrah with 35 points. Jack and Sue called it the perfect Syrah. Jean liked the color and nose and thought it was very well-balanced. Brian called it “inky, dark and chocolaty.” It sells for $53.

In 4th place with 36 points was Lorimar’s 2010 “Nocturne” Syrah. Brian enjoyed the “brambly nose of violets and lavender.” Rhonda called it “berry-licious!” Chris thought it was a bit acidic, but he liked its finish. It sells for $40.

Coming in second place was Thornton Winery’s 2011 Syrah scoring 36.75 points, just a quarter point higher than Bel Vino. I got a woody nose and dark fruit. Tony thought it was a great tasting wine. Al thought it was very drinkable with a nice soft finish. $34.

Claiming the top spot by a comfortable margin with a score of 46.25 points was the 2010 “Buon Vicino” Syrah from Palumbo Family Vineyards & Winery. The group nearly unanimously gave thumbs up to this offering from Nick Palumbo. Ken said “bingo! It’s a Syrah.” Chris thought it had great potential. Carol found it smooth, spicy and fruity. At $38 here’s proof the most expensive wine isn’t always the best.

We plan on doing more of these. We’re thinking about doing Cabernet Sauvignon the next time around.