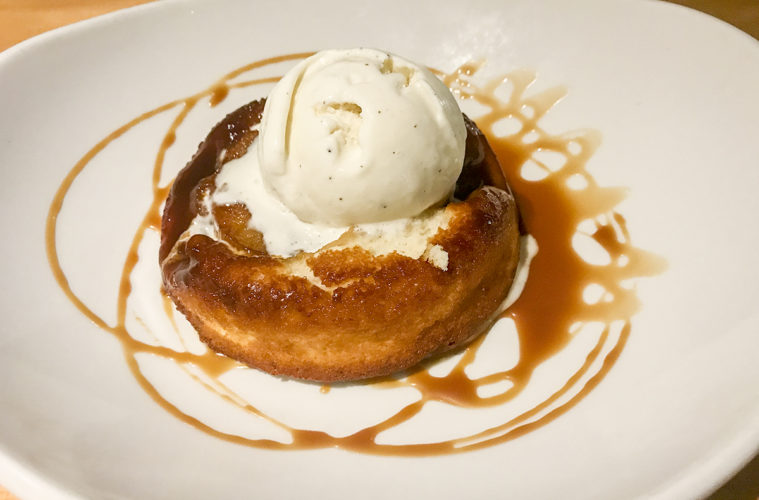 San Diego’s North Park is a vibrant, bustling neighborhood. Nestled among the many restaurants and shops you’ll find One Door North on 30th Street. Open just about a year now, it’s a sister restaurant to The Smoking Goat, which you may have guessed is one door south. One Door North is one of more than 180 restaurants participating in the fall edition of San Diego Restaurant Week.

Kat and I popped in for a preview of the restaurant week menu. Emily was quick to get us water and wine, much-needed after crawling through traffic on both the 15 and 805 freeways. General Manager and level two sommelier Ginny has selected an eclectic wine list with a few selections she says are for “wine nerds.” I chose the 2015 J.K. Carriere ‘Provocateur’ Pinot Noir from Oregon’s Willamette Valley, while Kat went for the NV Lucien Albrecht Brut Rosé from Alsace. Both hit the spot. Our table at One Door North overlooked 30th Street, an ideal spot for people watching and directly across the street from Modern Times brewery. Our server, Emily, was charming and was happy to make suggestions from the many selections on the restaurant week menu, which consists of an appetizer, entrée and dessert for $30. Kat decided on the fried cauliflower with a curried butternut squash purée and golden raisins. I opted for the Caesar salad, made with  chopped Gem lettuce, anchovy bread crumbs, parmesan and buttermilk dressing. The salad was ample and delicious, so ample, in fact, Kat had to help me finish it. I’m not a big cauliflower fan, but she insisted I take a bite and it truly was tasty. I went with the Niman Ranch pork chop for my entrée, a generous chop served atop mushrooms, red cabbage, fingerling potatoes and a grain mustard sauce. It was cooked to perfection and absolutely delicious. Ginny suggested one of he “nerd” wines to pair with the pork, the 2014 Doqi, an orange wine from the Kakheti region of the republic of Georgia. I hadn’t had any Georgian wines since I visited there a few years ago. The pairing was spot on. Kat went with the garden veggie flatbread with spinach, artichoke, red pepper, roasted garlic, tomato sauce and fontina. It filled a large wooden plank and was loaded with perfectly cooked vegetables. When Kat asked me where the restroom was, I had to repeat to her what I was told: “Take a left at the tents, and a right at the bicycles.” One Door North is eclectic indeed, and there are several tents you can dine in as well a bicycle on the wall. Ginny and Emily both explained to us that though a white chocolate panna cotta is listed as a dessert choice on the restaurant week menu, it wasn’t available that night. Instead they substituted an upside-down pear cake which Kat ordered and loved. I opted for the warm cookies and ice cream which was delicious and brought back memories of days gone by.

We left with full bodies and savoring another excellent meal. One Door North is certainly a choice I would recommend for restaurant week. You’ll enjoy a great three-course meal for $30. One Door North, 3422 30th Street, San Diego