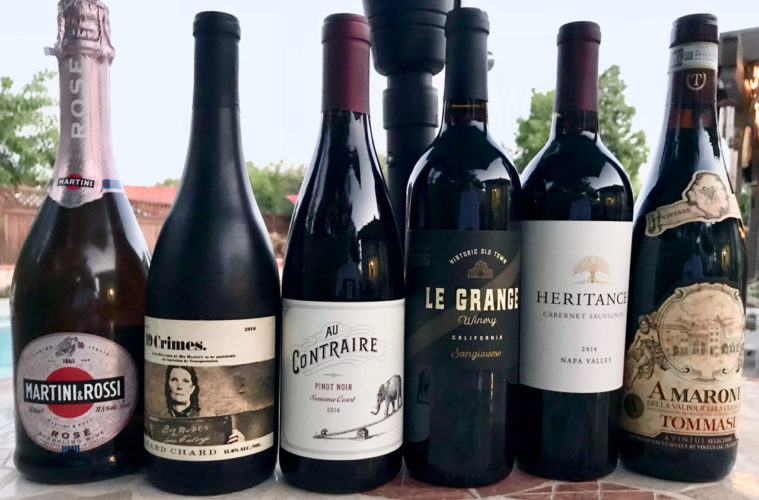 The thought of an evening wine tasting on a January evening doesn’t sound too appealing to me, with temperatures dropping into the chilly realm after the sun sets, but when we had a wine tasting last October, the weather couldn’t have been nicer. Our fearless group gathered at our home to share conversation, wine and food.

As you know, I love to start or end a tasting with bubbles, so we kicked off this evening with Martini & Rossi Rosé Sparkling Wine. This Italian gem was wonderful. Al called it a “lovely bubbly, not too sweet or dry.” He thought at $11 it was a great value. Brian enjoyed the “bitter sweetness combined with a scented  bouquet.” Kim said it needed orange juice and thought it would be good as a mixer. Kathy loved the beautiful rose color. The panel gave it a score of three and a half out of five possible stars.

In 18th century Britain, committing any one of 19 crimes could get you banished to the Australian penal colony. Many of those sentenced did not survive the journey. 19 Crimes wine capitalized on this and came out not only with an entire series of wines, but a phone app as well. On this evening we tasted the 19 Crimes Hard Chard from Australia. My hunch is we got an off bottle. None of the tasters had anything positive to say about the wine. If you use the phone app, you can watch Jane tell you what crime she committed. It’s a definite conversation starter. I’ve had it twice since and have poured it for dozens of people who had a generally favorable opinion of it, especially at the price of around $10.

From the Sonoma coast we tasted the Au Contraire 2014 Pinot Noir. Scott said the nose was pleasing and it had an appealing tart flavor. Kim called it sweet, but one-dimensional. Laura said it was very nice and she enjoyed it a lot. Wanda liked its “barnyard” nose and found it nicely balanced with good flavor. For Brian it was “sour cherries with an autumn berry sweetness and a smoky finish.” At $25 it averaged three and a half stars.

La Grange Winery isn’t open yet, but we wrangled a bottle from Doug and Debbie Wiens. Their Murrieta winery is slated to open early this year. Al called the 2015 Sangiovese “lovely, nice on the palate with a smooth finish.” Laura said it was highly drinkable. “Lovely nose” remarked Wanda, adding it had a great mouth feel and finish. Scott said it “hit all the spots.” It scored four stars and it will sell for $35.

Next we tasted the 2014 Heritance Cabernet Sauvignon from the Napa Valley. Kim thought it was smooth and mellow. Kathy liked the nose and smooth cherry flavor. Wanda said it was okay at first, but then it opened up nicely. Scott said he enjoyed it more after it spent about 30 minutes in the glass. He found it velvety with a soft hint of blueberry. It sells for $25 and scored just under four stars.

Finally we tasted the 2013 Tommasi Amazon from Italy. “Delectable” said Brian. “… nice fruit smoothness that lingers and satisfies in every way.” Wanda called it full and wonderful and said she loved it. Kathy said it was her favorite of the night. Scott said it didn’t quite measure up to other vintages he had tasted, but thought it was a great value at $45.  It got four and a half stars from our panel.

Tom Plant launched WINEormous, a food, wine and travel blog in 2009. Based in Temecula, California, he offers intimate winery tours for no more than seven people. Tour details and pricing are available at www.temecula-tours.com. Call now to book your Temecula Winery Tour at (951) 907-9701! Ask about special discounts.