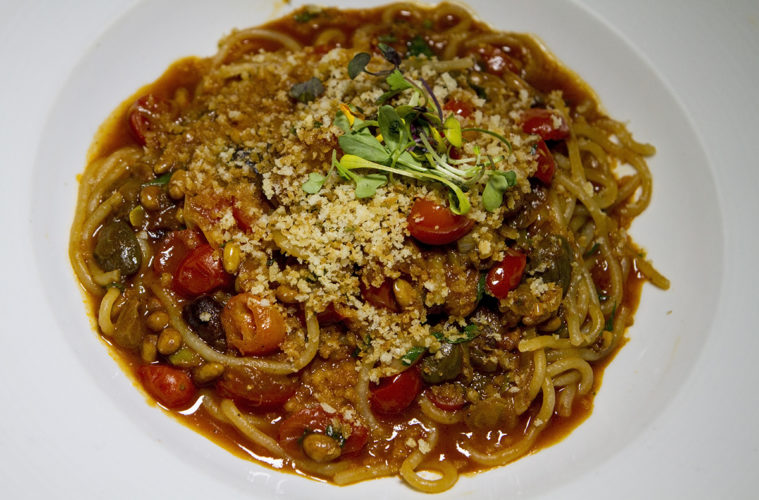 “I’m not saying we have the best Italian food in San Diego, but I’m saying we have the most authentic.” I met Randy Smerik, owner of Solare Ristorante shortly after he opened it five and a half years ago. My companion and I stopped in for dinner just after they had won the prestigious Tre Gamberi award from Gambero Rosso in Italy. Gambero Rosso translates to red shrimp, one of Italy’s top delicacies. “It melts in your mouth and tastes like butter” Randy told me. The food and wine magazine and publishing group honors restaurants world-wide with one to three shrimp , with Tre Gamberi being the highest honor. Solare received one shrimp four or five years ago, two shrimp three years ago and now they have received the ultimate Tre Gamberi, one of 13 world-wide and only three in the U.S. Randy has no restaurant background, but he does have the distinction of having visited Italy more than 150 times. His background isn’t in the culinary arts, rather high-tech and software. Many of his clients were based in Italy, other European countries and around the globe. He would leave San Diego on a ten-day business trip and spend a day or two in Copenhagen, Munich, Rome and Milan and then fly home from Madrid. The meetings with clients were important and they were always over a meal, “dinners tended to be very nice” he said, so twenty-one meals a week were at quality dining establishments. Over thirty years he got to see “some of the best restaurants in the world and how they did, not only by their menus and service, but their approach to marketing, the whole nine yards.” With all this experience he knew what went into creating a great restaurant experience, but admittedly knew nothing about working in a kitchen: how to provision, how to order, how to do it profitably, etcetera. A mutual friend introduced him to Chef Acursio Lotà, who at the time was a sous chef at the Marine Room. Acursio knew both cooking and how to run a kitchen. “A big part of what’s made Solare successful is Acursio knows what it means to come up with creative food ideas, prepare them in a way that people like and do it in a way that is still profitable for a business.” The balance is key he says. “It’s caused people to feel like we know what it’s like to be the customer, at the same time learning about great new foods, dishes and ingredients that Acursio knows all about.” Our meal began with a traditional Italian bean soup, the Zuppa Rustica di Legumi with heirloom borlotti beans, Umbrian lentils, garbanzos and lava beans, all cooked separately before being transformed into a hearty and delicious soup. We also enjoyed Solare’s version of a Caesar salad; grilled romaine with a mustard foam dressing, mustard seed caviar and crostini on the side. It’s Randy’s favorite salad. For antipasti we shared a venison loin carpaccio with balsamic vinegar pearls and puffed beef tendons. We also loved the lightly grilled California calamari with endive, black olives, capers and arugula. Solare’s presentation is spectacular. Each dish was absolutely divine as was each wine he suggested. My companion was craving vegetables, so Randy suggested the pasta puttanesca with a few twists. Chef Acursio added golden raisins and pine nuts to the black olives, garlic and capers atop the homemade spaghetti-style pasta. There’s a bit of tomato paste, but it’s not a tomato sauce. It’s also 100% vegan. I enjoyed a grilled sea bass, cooked in parchment paper. The waiter cut open the paper and drizzled olive oil over the fish, broccoli, potatoes and asparagus. Trust me when I tell you we had no room at all to even consider dessert. Randy went on to explain the difference between Northern and Southern Italian cuisine. You’ll find more of the heavy tomato-based sauces in the north as well as dishes like Fettuccine  Alfredo. In the south there’s more emphasis on olive oil, fish and vegetables. Randy heads up the wine program which consists 75% of wines from Italy with the remainder coming from the west coast of North America: Washington, Oregon, California and Baja. He loves agave-based spirits and sits on the board of directors of Fortaleza tequila. He offers at least two wine dinners a month, featuring mostly Italian wines and winemakers or winery owners. Son Tommy, a trained mixologist oversees the bar. Older son Brian is in the kitchen as a sous chef and is also an urban farmer, supplying micro greens, kale, different lettuces, cherry tomatoes and more. Solare is a family affair.

“I’m blessed having a great team that by and large is the same team I had when you and I first met four or five years ago.” He has a staff of 29 and can accommodate 90 diners inside and another 30 – 40 outside. We enjoyed our time immensely and I look forward to our next visit. Solare is located at 2820 Roosevelt Road in San Diego’s Liberty Station at Point Loma. Give them a call at (619) 270-9670. “If you want to re-live what it’s like to be in Southern Italy, then you come here.