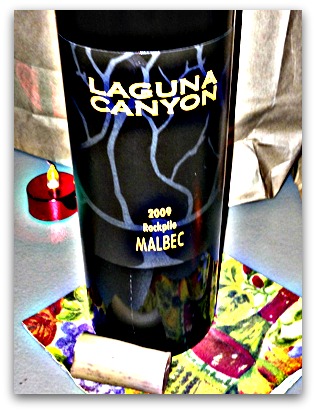 Laguna Canyon Winery In The Spotlight Christmas was in the air… and all over the table and the house. The members of the Occasional Wine Council gathered in early December to taste the wines of Laguna Canyon Winery. As always each of us was assigned a specific wine and asked to bring a food item to pair with it. This group delivered in spades. The table was over flowing with one delectable platter of food after another. Todd created a red and winter green shrimp salad with Korean pears and pomegranate with an Asian sesame dressing. The wine that accompanied it was a Los Carneros Pinot Gris and if memory serves it was a 2011 vintage. I picked up mint both on the nose and on the palate. It was a light crisp wine that paired very nicely with a St. André triple creme cheese, a lemon curd cheese, pomegranate arils and Todd’s salad. I enjoyed this wine, but felt the $20 price was a bit steep.

Laguna Canyon sources all of their fruit and the 2010 Chardonnay is made with fruit from the Russian River Valley. Many of us picked up guava on the nose. This Chardonnay had a nice round mouth-feel and bright acids. Ginger made deviled eggs with barbecue sauce and bacon that paired perfectly with it as did a quince preserve and chicken salad sliders. I felt this was priced well at $26.

Laguna Canyon’s 2009 Petite Sirah was made with Lodi fruit. It was a typically inky Petite Sirah featuring an oaky, smokey nose,  medium tannins and a nice long finish. This wine should be decanted or given time to open up as it got vastly better with time. Robin made a Philly cheese steak pizza that was a great match for it as were blackberries and egg salad. It’s a good value at $30. The 2009 Rockpile (Sonoma County) Petit Verdot was up next and for that Ginger prepared stewed figs with bacon on French bread. The wine showed a lot of promise, but it really needs some more time in bottle. I liked the plum and dark fruits on the nose, but the wine was pretty tight. I think it will wind up being an excellent wine and it paired quite nicely with Marc’s shepherd’s pie and the figs and bacon. It’s priced at $44.

The next wine also contained fruit from the Rockpile AVA, the 2009 Malbec. We all agreed that boysenberry jumped out on the nose and palate. It’s a slightly tart wine with notes of sour cherry. Marc’s shepherd’s pie, made with blue cheese and carrots was a nice fit with it as was chocolate with cranberry almond bark. You’ll find it for around $42.

The evening’s final wine was the 2009 Napa Valley Cabernet Sauvignon. I love a good Cab and this was a nice one with dark cherry on the nose and a long finish. Again, it’s still a young wine that’s I’m convinced will just get better with time. We paired it with banana bread, brownies and chocolate covered popcorn, all of which were good matches. Retail price is $48. Although the food and wine pairing portion  of the evening had come to its conclusion, all of us had been asked to bring a ‘wine council themed’ ornament. All were clever. I got a sommellier and Sue wound up with this jolly Santa wine stopper that lit up and changed colors. Wishing you a happy new year, until we meet again.