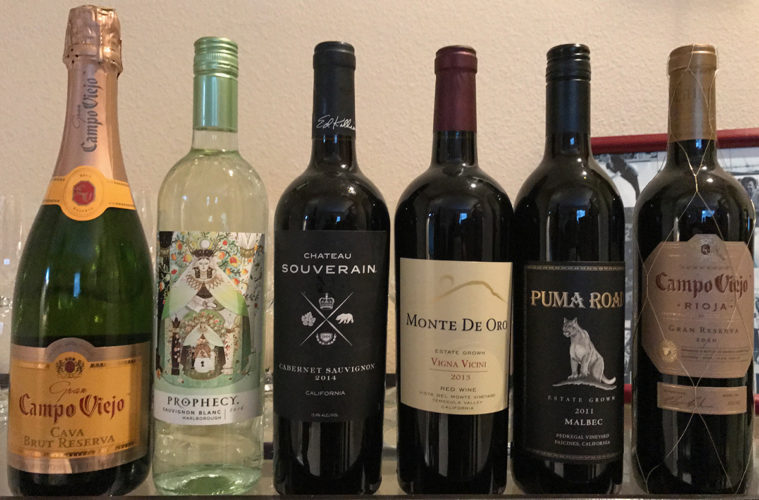 Jake and Maureen were our gracious hosts for this go round. It’s always fun watching Jake’s stress level go into overdrive as he feverishly tries to put the finishing touches on whatever gourmet concoction he’s creating on any given night. The smells emanating from the kitchen were heavenly and we gathered at the table for the first of six wines.

We began and ended the evening with two Campo Viejo wines from Rioja, Spain, the first a Brut Reserva Cava. Al called it crisp, fruity and very nice. Ken said it was very nice, too, bright, nicely balanced and “it dances on the tongue.” Kat adored it. Laura said it was delicious and a great value, a sentiment echoed by many tasters regarding the $13 price. Jim and Judi both loved it. Made from the Xarel-lo, Parellada and Macabeo grapes, our tasters gave it a solid four and a half out of a possible five stars.

We tasted the 2016 Prophecy Marlborough Sauvignon Blanc. This is a lovely New Zealand wine that Ken called “wonderful” noting a grassy lemon citrus nose and a wide blend of fruit. Laura loved the nose and lemony taste. Brian called it lemony, too and thought it was delicious. Kim thought it was lovely and Judi enjoyed its nose and flavor, calling it true to the varietal. Husband Jim said it was “the first Sauv Blanc that I’d go back for a second taste.” At $14, it scored a little more than four stars.

We moved onto reds, starting with the 2014 Chateau Souverain California Cabernet sourced from Lake, Mendocino, Napa and Sonoma Counties. Kim thought it was one-dimensional and Judi called it watery. Don said it was a nice Cab for $10. Al called it nice and light and thought it was a good value. Ken found it “pretty pedestrian.” Brian said it was “slurpable while you’re braising your short ribs.” It barely mustered three stars.

From Monte de Oro Winery in Temecula was tasted the 2013 Vigna Vicini, a Cabernet Sauvignon/Syrah blend. Jim found it soft and smooth. Al liked the color, but felt it was acidic. Ken said it had a touch of raisin. Al expected more for the $38 price. It averaged three stars.

The 2011 Puma Road Malbec from the Pedregal de Paicines vineyard in Central California was next up. Ken called it a “big cherry bomb!” Kat liked the beautiful color and nice nose. I liked its balance and long finish. Brian said it was “brambly, autumnal and integrated.” A few people felt the $40 price tag was a bit steep, but it scored a solid four stars.

We ended where we began, with a Campo Viejo wine, the 2010 Gran Reserva. A blend of  Tempranillo, Graciano and Mazuelo, it spends 24 month in French and American oak and 36 months in bottle before its release. Don called it cherry and plum-my. Jim found it very well-balanced. Laura called it excellent. It wound up being Ken’s favorite red of the night. At a very reasonable $19.99, it scored four and a half stars.