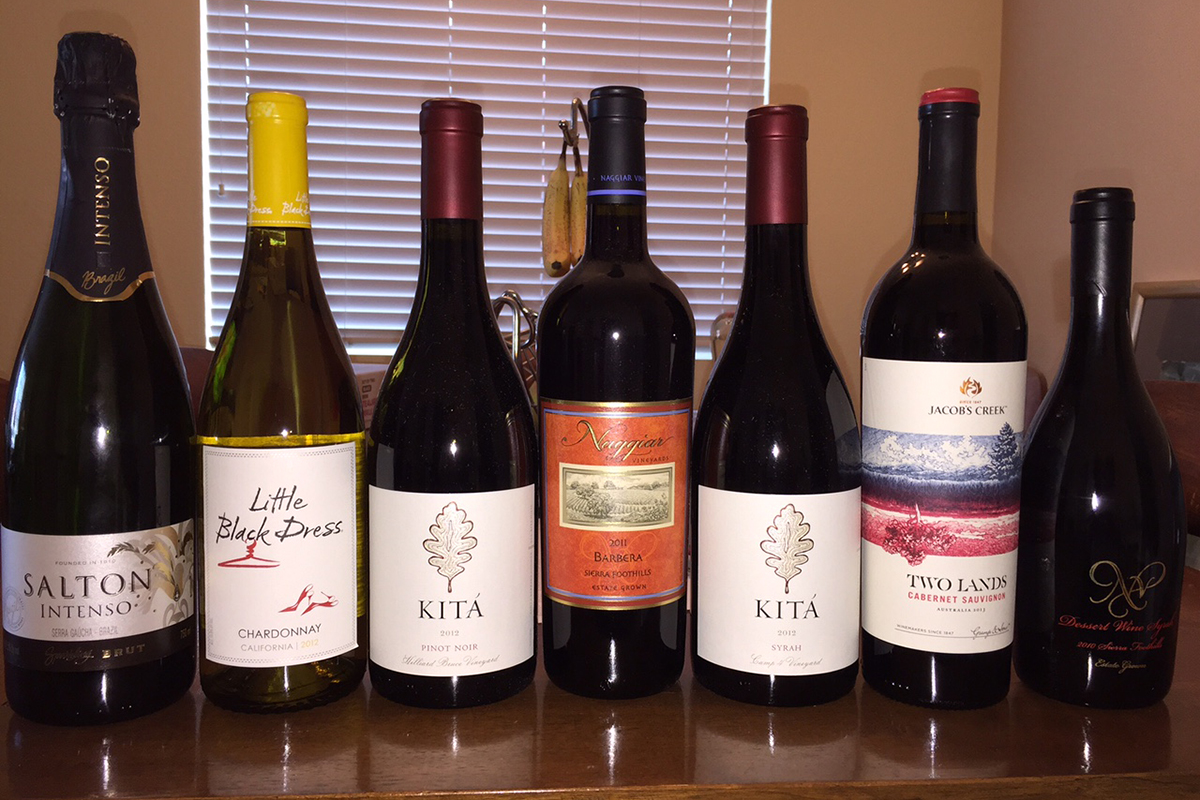 I count myself blessed to have the opportunity to taste so many wonderful wines and to share them with my friends.

We got together at Esther and Alex’s and began the festivities with a sparkling wine from Brazil, the non-vintage Salton Intenso. I really enjoyed this $15 sparkler, very crisp with lots of bubbles and good balance. Susan found the nose inviting and liked the mouthfeel. Ken liked the bubbles, too as well as the fruity nose. It was a hit with our tasters, averaging nearly four out of five stars.

The 2012 Little Black Dress Chardonnay was next. Ken picked up papaya and mango on the nose and thought this California Chardonnay was “very delicious.” Al called it an excellent value with a long fruit finish. Esther said “I do taste the vanilla. That’s my story and I’m sticking to it!” Jean called it an easy all afternoon drinker. It’s a terrific value at $10.

Kitá is a winery out of Lompoc that’s producing exceptional wines. We tasted their 2012 Pinot Noir and were blown away by it. “What’s not to like?” said Jean. Brian called it “totally delectable” and “really a balanced grown-up wine.” Ken thinks it will only get better with age. At $60 the panel rated it well over four stars.

We progressed to the 2011 Naggiar Vineyards Barbera from the Sierra Foothills of California. Brian called it “superb, unbeatable at the price.” Kim called it smokey, leggy and oaky. I liked the expressive nose and picked up cherries and berries. Ken called the nose luscious. At $25 it averaged a four star score.

Jacob’s Creek Two Lands is a collaboration between Jacob’s Creek winemaker Bernard Hickin and Napa’s Ehren Jordan. Using Australian fruit, the two winemakers produced four wines. We tasted the 2013 Cabernet Sauvignon. Kim picked up blackberry on the nose and palate. I found a lot of dark fruit on the nose , but felt it needed a bit more time in bottle. Susan enjoyed the long, warm finish. It retails at $13.99 and averaged about three and a half stars.

Kitá’s 2012 Syrah was our next to last wine. Robb called it dark and almost chewy. Al said it was very smooth and well-balanced. For Kim it was soft, yummy and smooth. Most of the tasters commented on its peppery character. It sells for $30 and scored almost four stars.

We ended the evening on a sweet note with the 2010 Naggiar Vineyards Dessert Syrah. Kim liked the fact it wasn’t cloying or overly sweet. I found it very light-bodied for a late harvest wine and liked the balance. Al called it a very nice after-dinner wine. At $30 it scored close to four stars.