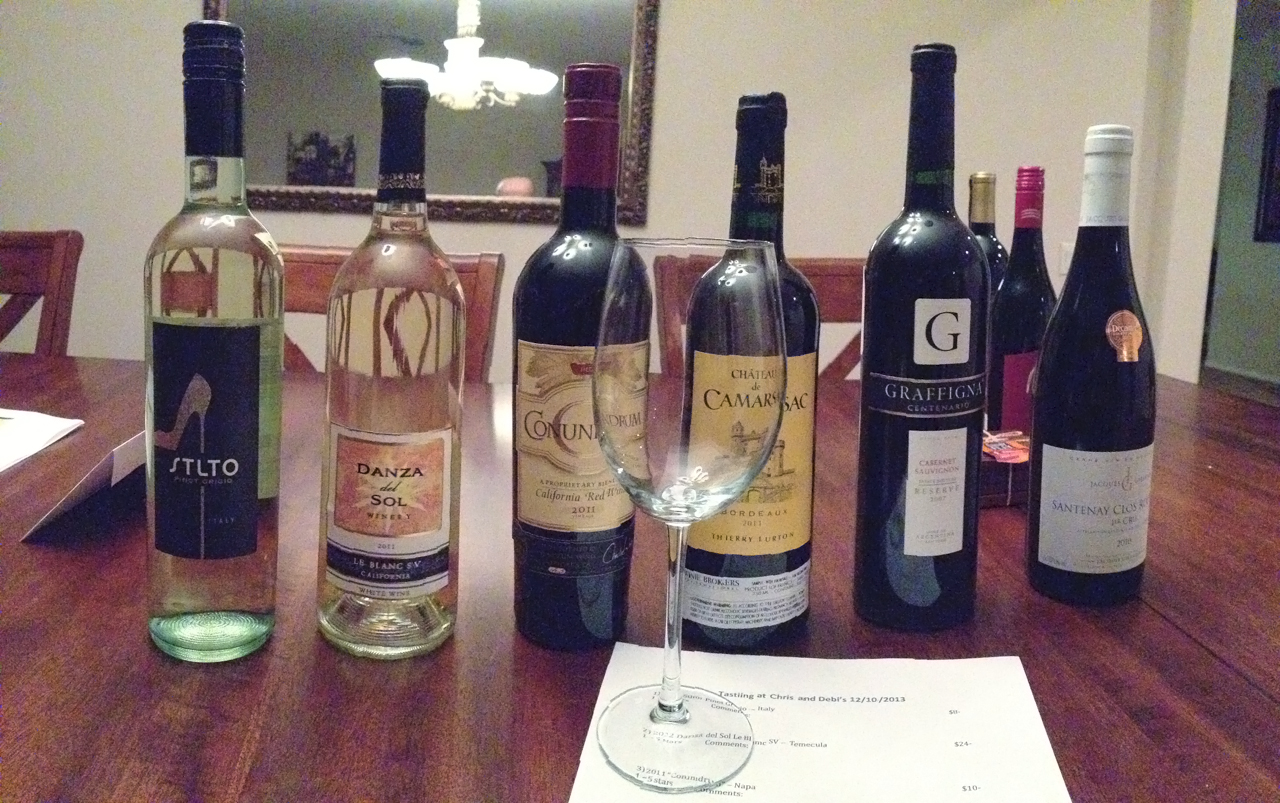 Raise A Glass To The End Of The Year! Just last night we gathered again, friends with food, wine and cheer for our last wine tasting of the year.

Prior tastings, however, took place that I need to share with you first. Let’s roll back to the beginning of December to an evening when we tasted eight wines. I love starting with bubbles and we began with Stlto’s (not a typo) non-vintage Prosecco. Brian thought at $11 it was a great value. He found it light and refreshing and thought it should be served really cold. I liked the crispness with a touch of sweetness. Ken found it smooth and refreshing. Tony gave it five stars and said “I’ll take a case for my wedding!” Our group gave it an average of four out of five stars.

Next up was a treasure I brought back from my tour of the 50 Great Cavas of Spain, the Mascarô Rubor Aurorae Rosé Cava. It’s not available yet on the west coast, but this group would grab it off the shelves if it were. Jan simply said it was delicious. I loved the nose and the crisp mouthfeel and picked up a hint of strawberries. Ken thought it was “beautiful all the way around.” It also averaged four stars and if you can find it it should set you back around $20 to $25.

We had yet one more sparkler, another non-vintage from Joseph Perrier, the Cuvée Royale Brut Champagne. The tasters adored this champagne. I found it delicate with a crisp clean mouthfeel and an amazing nose. Brian called it “lovely stuff.” Ken liked the apple on the nose and thought it was absolutely delicious. It averaged close to five stars and the group thought it was a good value at $51.

Next up was the 2011 Handcraft Artisan Collection Inspiration Red, a California blend. Tony called it an easy drinker. Jean liked its fruit forward, jammy taste and thought it was a good buy at $13. Chris thought it was immature and needed more time in bottle. It averaged about three stars.

At the halfway point we moved on to the 2011 One Hope Pinot Noir. Ken loved the berries on the nose and cherry on the palate. Brian thought it was a good value at $15 even though he found it on the sweet side. I thought it was nothing spectacular but easy to drink. A portion of the proceeds from each bottle of One Hope goes to various charities. Temecula is not known for Pinot Noir, but Gary and Marlene Woodworth are doing some incredible things in De Luz, in the hills west of Temecula. We tasted their 2010 Pinot Noir and all Tony could say was “wow.” Chris liked the fruit forward nose and lingering finish. I loved the pale color, the nose and its finish. It sells for $33 and it got close to a four star average from the panel.

Next up was the 2010 Domaine de Courteillac Bordeaux Supérieur and it got a wildly mixed review. Chris gave it four stars and liked its pungent nose and long, pleasant finish. Jake appreciated the tannic structure, black fruit and its finish. Tony thought it started great and then fell off. Al thought it was a bit sharp. Brian thought it was alright and that it tasted of the terroir. It averaged close to three stars and it retails for about $15.

The final wine of this evening was Dry Creek Vineyards 2011 Old Vine Zinfandel. Tony liked it, but said he didn’t get Zin on the nose or palate.On the other hand, Ken said it was definitely Zin on the nose, but not on the palate. Chris liked the fruity nose and creamy, lingering finish. You should be able to find it for about $25 or less and again it scored about three stars.

We gathered again a week later, this time at Chris and Debi’s house with six wines to sample, starting with the 2012 Stlto Pinot Grigio from Italy. On the side of Ken’s tasting sheet he wrote “winner winner.” Chris picked up peaches and apricot on the nose and its crisp clean finish. Al thought it was crisp and fresh and a great value at $8. The praise was unanimous and the group gave it between three and four stars.

We hadn’t tasted a Temecula wine in a while so we tried the Danza del Sol 2011 Le Blanc SV, a Sauvignon Blanc/Viognier blend. I liked the creamy mouthfeel and its balance. Al thought it was well-balanced, too and liked the buttery finish. Chris liked the citrus nose that extended to the palate and its fruity, lingering finish. It scored about three stars with most saying they would have scored it higher if it were priced less than $24.

We moved on to the 2011 Caymus “Conundrum.” Brian thought it tasted like shoe polish “but not bad for $20.” I thought it has a massive nose with lots of plum. This is a slightly sweet wine and it was a great pairing with Cottswald cheese. Chris thought it was very fruit forward with berries on the palate and terrific long-lasting finish. It scored close to four stars.

I went to an older red from Argentina, the 2007 Graffigna Reserve Cabernet Sauvignon. This wine needed time to open and it paid off when it did. It changed immensely with time, offering black cherry on the nose and palate. Chris liked the red fruit and spice on the palate and its tannic structure.Brian found it “rather ordinary.” I think it’s a good value if you can find it it should run you about $15.

Next was the 2011 Château de Camarsac Bordeaux. For Brian it was rosemary and earth with a taste of underripe berries. Ken also picked up on the earthy nose and thought it was smooth and light. For Chris it was a robust nose with dark berry fruit notes, good tannic balance and a smooth lingering finish. Most found it a great value at $11 and gave it slightly higher than three stars.

The last wine on our sheet for the evening came from Burgundy, the 2010 Jacques Girardin Clos Rousseau 1er Cru Santenay. Ken’s one word comment was “Bingo!” He loved its complex nose and smooth taste. The pale color struck me right off the bat and I thought it was delicate and elegant, an ideal Pinot Noir. Chris loved it, too and commented on its translucent appearance, light red fruit palate and clean lingering finish. This wine got several five star votes from the group and all thought it was a bargain at $36. It was the hands down favorite of the night.

Happy 2014. I’ll be sharing more tastings with you soon!