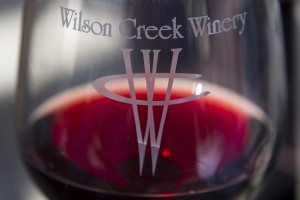 It was almost exactly four years ago that Bill Wilson and I sat down for a visit about his family’s iconic Wilson Creek Winery. At the time the winery was approaching its 10th anniversary. Bill recounted how before they opened they existed on peanut butter sandwiches, occasionally adding jelly as a luxury. He says tongue in cheek they’re back to eating peanut butter sandwiches because they have re-invested everything they have and then some into the business. “We don’t want to be known as ‘don’t come here on Saturday’,” so plans for expansion have been made. The tasting room walls will be blown out to add another 1800 square feet. Upstairs will boast an education room, with classes ranging from ‘Wine 101’ to advanced. Upstairs patio seating will help absorb more people when the weather is uncooperative. A bar and televisions will be added to the Solera patio. Plans to dry in the patio and install a solid roof at Creekside Grille, Wilson Creek’s restaurant, will ensure diners can enjoy its ambience no matter what the weather.

New is Wilson Creek Manor across the street. With nine suites, it represents the winery dipping its toe into the hospitality market. If it becomes as successful as Bill hopes, the plan is to add a resort and spa. Bill also envisions a big barrel cave for guests to explore. An exceptional experience for his guests is at the heart of what drives Bill. As an example, he fought to keep the Salmon BLT on the Family Favorites menu at Creekside Grille even though others advised him against it. His thoughts? Even if you lose a dollar or two, you’re making people happy. There’s a Bubble Brunch Buffet each Sunday. Bill said to his team “if the number one Champagne seller in the valley can not own Sunday brunch, we don’t deserve to be doing it.” Garrat Wilkin and the Parrotheads

Wilson Creek has been presenting concerts for the past several years. “We do it because we like it and we have fun at them” says Bill. They started out offering jazz, then as wife Jenifer’s musical preferences began to shift, so did the styles of music. Garrat Wilkin and The Parrotheads are a popular draw. You’re likely to find Bill at each and every show as well as other family members. They also offer an annual grape stomp, ugly sweater contest and celebrations of New Year’s, Valentine’s Day, Mother’s Day and Easter. Gerri and Rosie, Bill’s mom and dad, are doing well. They typically come in for a late lunch and a glass of wine in the tasting room. Bill had another meeting to attend, so I had a visit with winemaker Etienne Cowper and Executive Chef Steve Stawinski. Cowper came by winemaking in a most unusual manner. After earning his Bachelor’s Degree in Anthropology, he moved to Albuquerque and got his broker’s license as a REALTOR. He met his wife who was a graduate student in linguistics at UNM. They wound up taking a wine appreciation class together which ignited his technical interest in wine. They moved to California, where he spent time at several small wineries on the North Coast and Sierra Foothills. After entertaining thoughts of becoming a wine wholesaler, he decided he would rather make wine than sell it and signed up at Fresno State. He got into the Master’s program, graduating in 1984. His career didn’t get off to the most glamorous of starts. He worked the graveyard shift at a tank farm, running the centrifuge and decanter. From there he hired on as assistant winemaker at Konocti Winery in Lake County, eventually becoming winemaker.  It was there he got the chance to work with John Parducci and the legendary Andre Tchelistcheff. He was eventually laid off and moved to Kendall-Jackson Winery as their enologist. His wine journey led him back to New Mexico and Texas before finally settling in Temecula. He met Peter Poole and began working at Mt. Palomar Winery, where he spent 17 years. He spent six months consulting for Wilson Creek before Bill made him “an offer he couldn’t refuse.”

Etienne strives to achieve balance in his wines, and he knows how critical it is to get it right in the vineyards. He recently hired Greg Pennyroyal who worked for the FDA producing medicinal herbs. He studied under Etienne at Mt. San Jacinto. Etienne says since Pennyroyal joined the team there’s a night and day difference in the fruit they are harvesting. “Now” he says, “I can let the vines express themselves.” He wants his wines to express Temecula terroir, using minimal intervention. He believes this valley is ideally suited for Mourvedre, Montepulciano, Tempranillo and Viognier. Chef Steve moved over from Ponte Winery three years ago. Bill didn’t like him at first. He was more serious and much quieter than his predecessor. “The more I get to know Steve”, he says, “the more I love him.” Relinquishing control isn’t an easy task for Bill, but he says he’s learned to trust his chef and winemaker and knows they’ll do everything they can to “make the best wine, the best food, and not lose money doing it.”  Steve picks up on the flavors in Etienne’s wines and creates dishes designed around them. He believes in sourcing sustainable products, but points out there are a lot of factors to consider; the carbon footprint it leaves and whether a fish is being over-fished or not to name a few. His focus is on local when possible. He simply wants the best product he can find. For lunch I enjoyed calamari, a veal burger topped with a fried egg with a black barley and sausage salad and a light, refreshing Grenache Blanc garnita topped with chopped melon. Steve’s food rivals anyone’s in the valley and he was recently named the third best chef in San Diego. Mind you, he’s not in San Diego, he’s in Temecula. I ended my visit across the street at Wilson Creek Manor where I met Guest Services Manager Abby Trybulski. They’ve done a splendid job renovating the place and tying the look and feel of the exterior to the look and feel of the winery. The rooms are spacious and well-appointed and it has a cozy charm. Wilson Creek Winery  – 35960 Rancho California Road. You can reach them at (951) 699-9463. Fit For The Bridal Party