How We Taste Wine 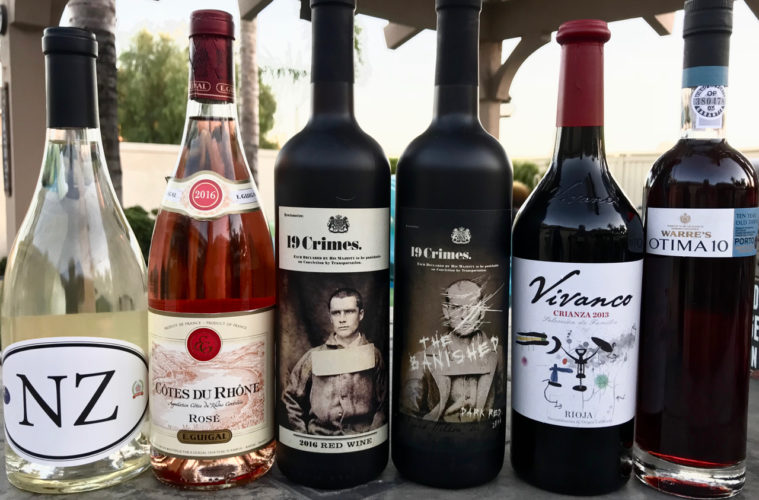 2017 seems to have simply flown by. It seems like just days ago we got together at Taryn and Ken’s home on a very warm October evening to taste wine and enjoy each other’s company. As I recall there were copious amounts of food and several cigars smoked as evening turned into the dark of night.

We began our journey with Locations NZ Sauvignon Blanc. Dave Phinney travels the world with a mission of mixing things up, for instance blending Burgundy with Rhône. In this instance, he went with 100% New Zealand Sauvignon Blanc. Laura expected it to be sweet when she smelled it, but said the nose fooled her. It was dry. I loved the classic New Zealand nose and liked its balance and mouthfeel. Jim said even though Sauvignon Blanc isn’t his favorite he liked it and found it refreshing. It sells for $20 and scored around three and a half out of a possible four stars.

Next we tasted the 2013 E. Guigal Côtes du Rhône Rosé, a blend of Grenache, Cinsault and Syrah. Ken picked up notes of grapefruit, pineapple and peach on the nose and detected a little heat on the finish. I found it dry, crisp and refreshing. Kim said it was nice and light, a “great everyday wine for summer.” At $14 it scored a little better than three and a half stars. In the eighteenth century there were 19 crimes that could get you banished from England to Australia’s penal colony. Transit was tough and many didn’t survive the voyage. 19 Crimes pays homage to those who were banished. Each bottle has one of the prisoners on the label and with the 19 Crimes phone app, you can see and hear the prisoners tell their tales. We tried their 2016 Red Wine (clever name, isn’t it?) and Jim found it a little sweet with lots of fruit. Ken called it very drinkable. Al felt it needed another year in bottle. Kim called it yummy. It scored nearly four stars and it costs $10. I’ve seen it for less.

The Banished is another 19 Crimes wine. Ken said the nose was more complex with some chocolate and cherry on the palate. Jim called it very good at $10. Kim felt it was a good wine for the money. I liked its deep color and chocolate cherry notes. It, too sells for about $10 and our tasters gave it just under four stars.

From Rioja, Spain we tasted the 2013 Vivanco Crianza. Laura said “very good. I like this one.” Jim said “very good at $17. Lots of berries!” Ken called it his favorite wine of the night. Lisa found it full and rich with chocolate and vanilla. It scored just over four stars.

We ended the tasting with Warre’s Otima 10 Year Old Tawny Port. Warre’s has been making Port for a long time. It was founded in 1670, the first British Port company in Portugal. Al called it flavorful, nutty and smooth with a lingering finish. I loved the nose. Jim loved it, too and said it tasted like chestnuts. “A bargain at $26.” Laura added “I usually don’t like Port, but this is very good.” It averaged four stars.