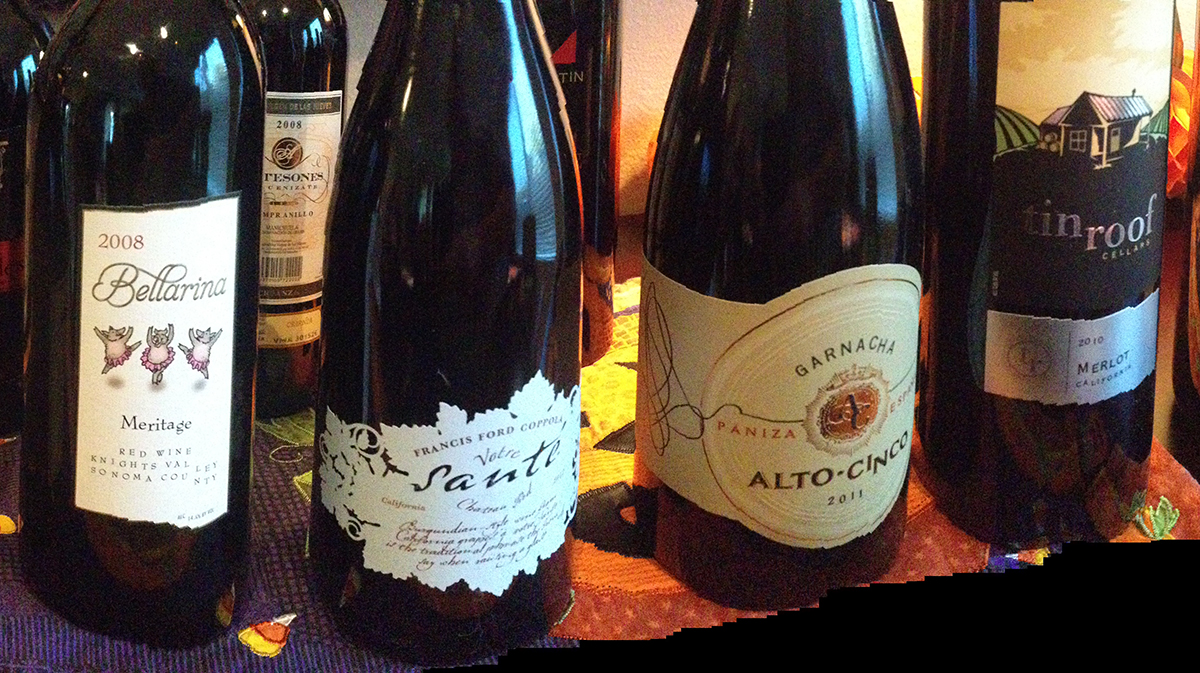 Where has the time gone? We’ve been busy tasting wine, traveling and socializing and I need to get caught up! I’ve got more than 20 wines to share with you, so here we go with part one of two!

1) Non-vintage Camelot Pinot Grigio from California. Ken gave it two and a half out of five stars and thought it would be good in sangria or a wine cooler. Chris gave it three stars and enjoyed the citrus on the nose and palate. The group gave it an average score of two and a half points. It’s a steal at $6.

2) 2012 Dry Creek Vineyards Sauvignon Blanc from Sonoma. This wine garnered attention. Robb liked the fact it wasn’t a melon bomb and enjoyed the grapefruit nose and Mandarin orange on the palate. Amy loved the nose, flavor and finish. The average score for this $16 wine was three and a half stars.

3) 2012 Sofia Chardonnay from Monterey County. Ken loved this wine and gave it four and a half stars and called it “luscious.” Chris loved its citrus nose and smooth finish. Cindy not only liked the wine, she loved the bottle and found the wine very food friendly. It averaged a three and a half star rating and you should be able to find it for about $16.

4) 2011 Noble Vines “1” Red Blend from California. This was interesting. At first Cindy said “don’t like. Don’t even think it needs to open.” Then she paired it with food and “suddenly yum!” Amy liked it paired with smoked salmon. I wasn’t wild about it at first but it improved immensely after an hour of air. Chris said it was fruit forward with hints of currants and dark berry fruit with a lingering finish. It averaged three stars and retails for about $16.

5) 2011 Messina Hof Cabernet Franc from Texas. This was the one I was waiting for. Every single taster said there wasn’t any good wine from Texas. And then they tasted it. Chris found it very complex, fruit forward with a nice balance of acid and tannins. Robb simply said “my style.” He thought it had a great nose and very European character. Al thought it was excellent. It averaged more than four stars from our gang of skeptics and it sells for $22 at messinahof.com.

6) 2010 Francis Ford Coppola Director’s Cabernet Sauvignon. Jean said it was very drinkable. Amy liked the color but thought the wine was “meh.” Cindy found it smooth and picked up white pepper, leather, green bell pepper and a hint of smokiness. Most in the group loved this $29 wine and it averaged higher than four stars.

1) 2010 Napa Cellars Chardonnay from Napa. Jan said it was oaky, smooth, creamy and buttery, Brian thought it was quite delicious and a great value at $16. Tony loved it and said “Very Nice! Big Chardonnay! Awesome value!” Ken picked up baked apple and caramel on the nose and thought it exploded when paired with pepperoni. It scored four stars or better.

2) 2012 Milagro Farm Chardonnay from Ramona. Jim Hart from Temecula Hart Winery is the winemaker at Milagro Farm. Ken found the nose bright and clean with pear and thought it was refreshing. He thought it was great with asparagus and prosciutto. Chris thought it was clean and crisp with a long, smooth finish. Priced at $23, it averaged about three and a half stars.

3) 2008 Bellarina Meritage from Sonoma County. Ken loved the dark fruit, pepper and spice on the nose. “Smooth, smooth and smooth.” He thought it paired perfectly with English cheddar. Jan liked everything about it: nice nose, nice finish and hints of cherry. I thought it was well-balanced with blackberry and spice on the palate. The group gave it more than four stars and thought it was priced well at around $20.

4) 2012 Votre Santé Chateau Red from Sonoma. This offering from Francis Ford Coppola Winery got mixed reviews from our tasters. Chateau Red is a Rhône blend, primarily Syrah, Grenache and Mourvedre. I loved the garnet color and tart cherry nose and thought it was well-balanced and food friendly. Chris noted a soft dark cherry palate, aromatic smoky notes and earth tones. A few tasters felt it was thin. It’s priced at $11.

5) 2011 Alto- Cinco Garnacha from Spain. Ken said “nice, nice and nice.” He said it was like silk on the mouth. For Brian it was “sharp and nasty, but it grows on you.” Jan thought at $10 it was a good value and easy drinking.” It averaged between three and four stars.

6) 2010 Tin Roof Merlot from California. Chris gets quote of the night honors with “I’m not angry at it.” He called it light and bright. I thought it had a pretty nose and was fruit forward, but a bit thin. For Brian it was “truly terrible.” Also priced at $10, it received an average score of three stars.

7) 2011 Dry Creek Vineyard Old Vine Zinfandel from Sonoma. I enjoyed the black licorice nose and found it fruit forward but not jammy. Ken scored it at five plus stars saying it had a major blueberry nose, yet not too heavy. Tony thought it was a little light, but enjoyed the pepper on the palate. It’s priced at $30 and it averaged about four out of five stars.

In the meantime, we’re still tasting and I’ll have more notes for you soon.